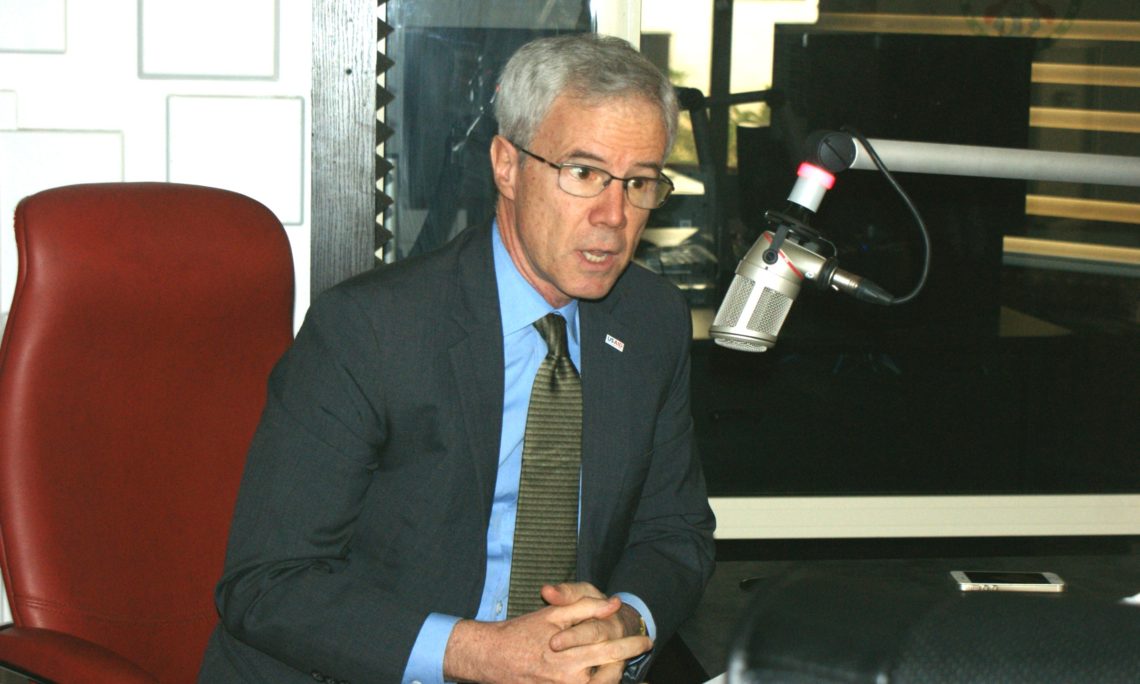 USAID Mission Director Michael Harvey was on Tuesday March 14, 2017 a guest on a live-call in radio program on Armed Forces Radio 107.7 FM. During a 30 minutes program on ‘Home Sweet Home’ show, Harvey talked about what USAID is doing in providing humanitarian assistance to the people displaced by Boko Haram crisis in the northeastern part of Nigeria. He said “we have been a direct actor in terms of providing support to UN Agencies, International NGO’s and the government of Nigeria to provide direct assistance to IDPs.” He also said the other key role USAID has played has been to rally the international community to get NGOs to bring their top leadership and staff who have done this before, and also to encourage the UN to do the same.

Harvey categorized the assistance USAID is giving to the IDPs in the northeast into two parts, “one is health and one is nutrition”. Adding that “one of the most urgent things we’ve been trying to do is to physically get food into people’s hands”.  He said when the Nigerian military re-took control of Local Government capitals in rural Borno state, “we saw a huge movement of rural populations who had been behind Boko Haram lines for one or two years, who came into these militarily-controlled towns and were in terrible shape.” Children were dying in large numbers every day and that has pretty much stopped as the Nigerian military and international aid agencies including the Red Cross have managed to get them food, he said.  However, he also said “we still have a long way to go to know that everybody is getting at least the minimum necessary.”

Responding to a question about the plight of IDPs in the northeast, Harvey said “In Borno, Adamawa, and Yobe alone we are talking about 1.7 million IDPs.  But there is really something between five and eight million who have moved around to every state of the federation.  And the plight of these people is serious.”

Harvey was asked about what needs to be done in order to resettle and rehabilitate those affected by the Boko Haram crisis, and his response was “the focus today is still humanitarian relief because most IDPs can’t go home”.  He said rural Borno is still not a safe place to go back to and “the key thing to remember is that we’ve got to be careful so that we do not push IDPs to return home before the conditions are safe and whenever they go home it is going to be their choice, it is going to be voluntary and it is going to be informed.”

In his final message, Harvey said “I want everyone wearing a uniform, especially those in the northeast to know how much all of us appreciate the tremendous sacrifices that they have been making,” and each time they walk into a town and liberate a place from Boko Haram, they are the first responders who are meeting the needs of IDPs. They are providing security, sometimes food out of their own rations.  I’ve heard of soldiers volunteering as teachers and medics. That is a great story, and it is one that all Nigerians can be proud of”, he said.