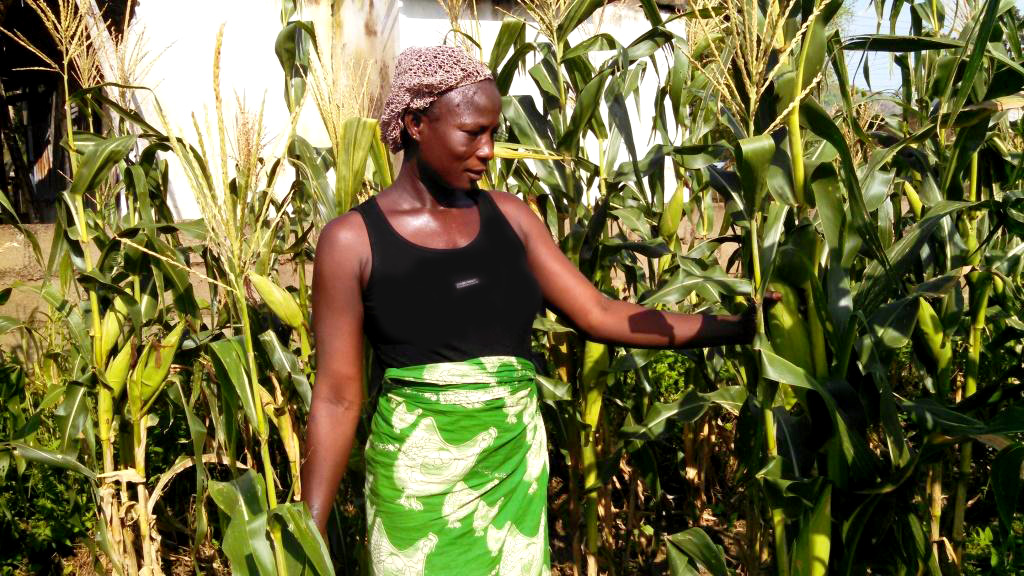 Before the harvest, Mary Utsewa touched an ear of maize so large she could hardly get her hand around it.  She looked at the stalks reaching above her head and considered her good fortune.  Driven from her fields for three growing seasons by Boko Haram, Mary is a farmer again.

Mary and her family were among 6,000 farming households displaced by Boko Haram to benefit from a USAID activity to provide seeds and farming implements to help them transition back to an agricultural lifestyle after years as Internally Displaced Persons (IDPs).  Many of these families had been unable to produce for themselves and were reliant on humanitarian aid for several growing seasons.

Displaced and living near the town of Magadali, in northeastern Nigeria near the Nigeria-Cameroon border, Mary and her family were allotted a parcel of land by the host community, and were able to plant the seeds in July.

“No words can express my joy for this harvest,” Mary said.  “From the community that lent me the land to grow this crop to the donation of the seed, I can’t believe it.”

With the harvest complete and ten 100 kilogram sacks full of quality product, Mary and her family now have ready access to cash and other food staples, and most importantly some hope for the future.

Two months after the planting, agronomists with USAID followed up with the beneficiaries.      Calling on traditional leaders known as maiunguwas, village chiefs, religious leaders and officials of the U.S.-supported Adamawa Peace Initiative of the American University of Nigeria, the researchers found some surprising results.

While 85 percent of the seeds went to the IDPs, the remainder went to host families to alleviate the strain suffered by communities that accommodate the displaced.  These host families were included in the seed program in recognition of the importance of restoring food and economic security to everyone in this troubled corner of Nigeria.

Small successes like USAID’s seed distribution program cannot by themselves address the humanitarian crisis precipitated by the scorched earth tactics of the Boko Haram insurgency.  Through its Office of Foreign Disaster Assistance and office of Food for Peace, USAID has also provided $366.5 million in  humanitarian assistance to people living in the Lake Chad Basin, working with United Nations agencies among other partners.  USAID, the leading provider of humanitarian assistance for the United States Government, anticipates it will soon announce additional food and non-food assistance for the region.

USAID also provides approximately $500 million annually in development assistance to Nigeria in the areas of health, economic growth and the environment, education, and good governance.

Building on the success of the pilot activity, USAID, through the U.S. government’s Feed the Future initiative, plans to scale up agriculture efforts ahead of the next growing season.  As for Mary, she plans to share her good fortune with her host community.