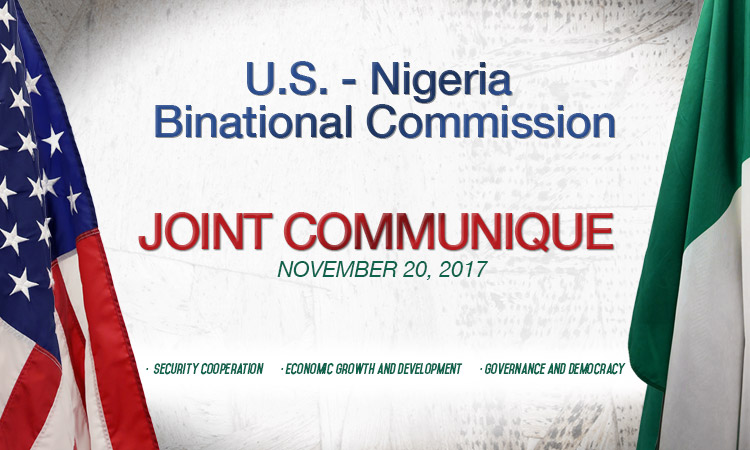 This year’s BNC focused on advancing U.S.-Nigerian shared prosperity, including discussion on three areas of focus:

Prior to this year’s BNC, in their February 13, 2017 call and their September 20, 2017 lunch event at the opening of the United Nations General Assembly, President Donald J. Trump and President Muhammadu Buhari recalled the enduring bonds between the peoples of the United States and Nigeria. They reaffirmed their commitment to further strengthen the U.S.-Nigeria partnership in a manner that promotes a future of shared prosperity for both nations.

In their February 17, 2017 call, President Buhari and U.S. Secretary of State Rex W. Tillerson decided to utilize the BNC as the high-level strategic platform through which to advance the nations’ shared goals.

Recognizing Nigeria’s strengthening democracy, its large population and dynamic economy, and its importance as a peacebuilder and peacekeeper, both nations seek to capitalize on areas of shared interest. The United States is expected to benefit from Nigeria’s leadership in promoting security, stability, and democracy on a continent brimming with emerging opportunities for U.S. trade and investment; Nigeria is expected to benefit from U.S. political support, security cooperation, technology, financial resources, and humanitarian and development assistance. The two countries developed a detailed agenda to guide discussions on a proposed goals paper, which would identify bilateral efforts for the next year. The November 20 BNC directed existing working groups for each of the three focus areas to finalize individual goal papers within one month.

The BNC noted the continued threat to peace and security posed by Boko Haram and ISIS-West Africa. The United States reaffirmed its support for Nigeria and its Lake Chad neighbors in countering these threats.

The BNC noted that U.S.-Nigeria bilateral security cooperation focuses both on immediate threats and medium- and long-term security and stabilization objectives. The BNC discussed progress toward the sale to Nigeria of A-29 light attack aircraft and associated training, and other areas of enhanced security cooperation.

The BNC jointly determined to take further actions to advance U.S.-Nigeria security cooperation to promote peace and security in Nigeria, especially in Northeast Nigeria and the broader Lake Chad region. Both sides recognized that this cooperation includes, but is not limited to, military cooperation.

The BNC discussed the coordinated, comprehensive response that is needed to bring sustainable peace to Nigeria’s Northeast region, including the humanitarian response; restoring civilian security, establishing effective governance to deliver essential services, and reviving moribund economies in areas liberated from terrorists; encouraging defections from Boko Haram and ISIS–West Africa; transferring military detainees to civilian correction facilities; eliminating terrorist financing; expanding intelligence sharing; conducting integrated planning for the restoration of full civilian authority, resettlement, and reconstruction; protecting civilians, safeguarding human rights, ensuring credible investigations, and prioritizing accountability for instances of security force abuses; ending the use of child soldiers and implementing a United Nations-backed action plan on this matter in a timely manner; and addressing the long-standing concerns of citizens in the Northeast, including with respect to economic opportunity.

The BNC discussed the unsustainable situation of internally displaced persons in Nigeria and refugees in the region, and the Governments committed to work together to create conditions for their safe, dignified, and voluntary returns. The BNC acknowledged the significant contributions of the United States in supporting humanitarian assistance. The BNC discussed Nigerian efforts to help those affected by the violence begin to rebuild their lives, and the announcement of $45.5 million in additional U.S. assistance to support stabilization and early recovery work in Nigeria’s Northeast region. This effort is expected to include the creation and launch of a specialized stabilization police unit trained and equipped to be capable of accomplishing higher-risk policing tasks for civilian security in former terrorist-controlled territories.

The BNC discussed longer-term security cooperation goals, including Nigeria’s efforts to modernize its security institutions and U.S.-Nigerian partnership on improving maritime security. The BNC discussed peacekeeping as well, and Nigeria underlined its intention to maintain its significant contributions to international peacekeeping in Sudan, Somalia, Mali, The Gambia, and Guinea-Bissau.

The BNC directed the Working Group on Security Cooperation to meet within six months to review progress on joint goals.

Both sides decided to hold the next U.S. Trade and Investment Framework Agreement talks in the first part of 2018 and to work to finalize an agenda for that meeting, to include a decision on a joint work plan on intellectual property protection. The two sides finalized a Memorandum of Understanding establishing a Commercial and Investment Dialogue signed by Commerce Secretary Wilbur Ross and Minister of Industry, Trade and Investment Okechukwu Enelamah as a way to strategically engage the private sectors of each country in strengthening commercial ties.

Both sides acknowledged the importance of and potential for increased bilateral trade and investment through enhancing the business climate, policy predictability, and transparency. The two sides discussed the importance of implementing World Trade Organization-consistent trade measures, as well as the Trade Facilitation Agreement.

The BNC noted the Governments’ decision to take further actions to promote inclusive prosperity and growth, economic diversification, and job creation through policies that are expected to improve the environment for doing business together. In this respect, the BNC recognized that sound fiscal and monetary policies, complemented by structural reforms and clear and transparent regulations, are important to managing the challenges of volatile global oil prices. The BNC also noted the importance of further diversifying the sources of government revenue.

The BNC noted the Governments’ pledge to work together to ensure maximum utilization of available tools to promote mutually beneficial trade and investment, including the African Growth and Opportunity Act.

The BNC recognized the importance of infrastructure development for Nigerian economic growth, noting particularly the importance of ensuring open and transparent bidding procedures for infrastructure projects. The BNC also noted the importance of increasing access to electricity, including through the continued modernization of the power sector, and noted continued U.S. assistance in this area. With respect to economic diversification, the BNC noted the potential for expanded agricultural investment and production, in particular through strengthening agro-business value chains. The extractive industries, including solid minerals, petroleum, and natural gas, also continue to play a role in economic diversification.

The BNC directed the Working Group on Economic Growth and Development to meet within six months to review progress on joint goals.

The BNC noted the historical importance of Nigeria’s 2015 elections and the peaceful transition that ensued. The United States noted its intention to support Nigerian efforts to improve the quality and transparency of elections, particularly in the lead-up to the 2019 elections, and looks to Nigeria to continue to support democracy and peaceful transitions of power across Africa.

The BNC decided to strengthen U.S.-Nigerian joint efforts in support of good governance, respect for human rights, accountability, anti-corruption, and the effective use and delivery of public services, including efforts to reinforce peace building and conflict management in Nigeria.

The BNC concurred that the Government of the United States should continue its support for the Economic and Financial Crimes Commission and other anti-corruption agencies, as appropriate. The BNC discussed Nigeria’s participation in the Open Government Partnership (OGP) and its potential to complement Nigeria’s anti-corruption efforts. Nigeria expressed its dedication to robustly implement its 2017-2019 OGP commitments and respond to an outstanding invitation to join the Partnership on Illicit Finance in due course.

The BNC noted the Governments’ decision to intensify their work together to help Nigeria trace funds and assets stolen through corruption and other illicit activities and seek to recover the assets.

The BNC decided to expand people-to-people contacts between the two countries, including continuing efforts such as the Young African Leaders Initiative.

The BNC discussed multilateral cooperation, through ECOWAS, the United Nations, and other international organizations, and Nigeria’s role as a leader on the continent and a critical partner to the United States on a range of global issues.

The BNC directed the Working Group on Governance and Democracy to meet within six months to review progress on joint goals.

Vote of Thanks and Next Meeting