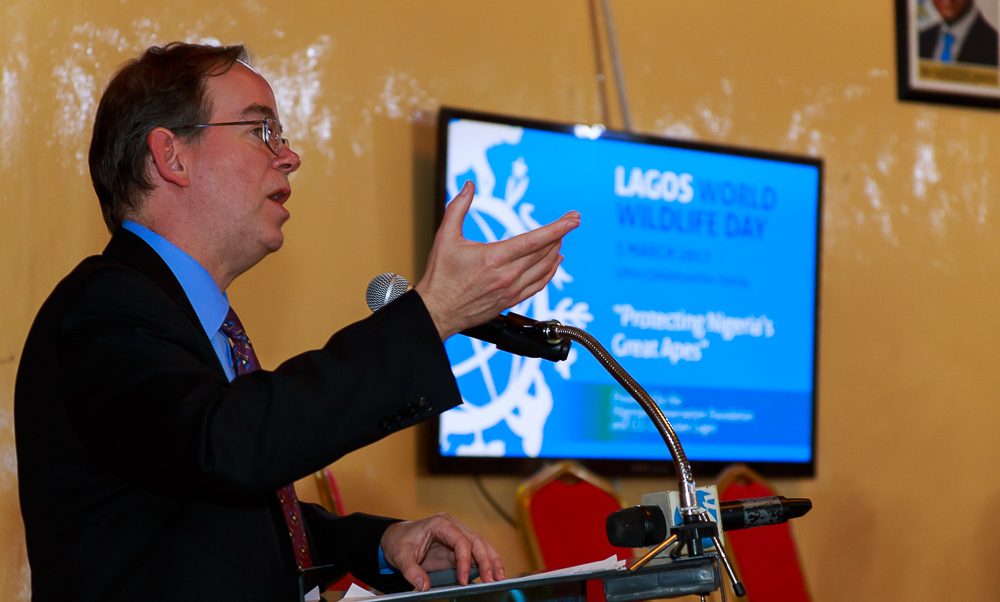 Lagos – The United States Deputy Chief of Mission Mr. David Young has urged Nigerians to help stop the trafficking and habitat destruction of Nigeria’s many endangered native species, including the Cross River gorilla and Nigeria-Cameroon chimpanzee.

At an event jointly organized by the U.S. Consulate General Lagos and the Lekki Conservation Centre on March 3 in commemoration of World Wildlife Day, Mr. Young welcomed actions by Nigeria’s government to adopt legislation against trafficking of endangered animals.  He also contrasted the economic benefits of sustainable ecotourism with the potential socio-economic impact continued wildlife trafficking could have on the country.

“Sustainable ecotourism is important to many nations of Africa, creating numerous tourism sector jobs.  Conserving natural resources is vital.  If Nigeria loses its precious large apes and other mammals, ecotourism revenue and jobs disappear with these animals,” Mr. Young noted.

“Communities and individuals have the most important role to play.  Communities and consumers can refuse to do business with illicit traders and poachers.   In the social media age, everybody has an ability to hold people accountable for what is happening – documenting the dangers, and joining together for action.  So I urge you take up the challenge to preserve your forests, and the wildlife that depend on the remaining forests to survive,” he added.

The United Nations General Assembly on 20 December 2013 proclaimed March 3 as UN World Wildlife Day to celebrate and raise awareness of the world’s wild animals and plants.