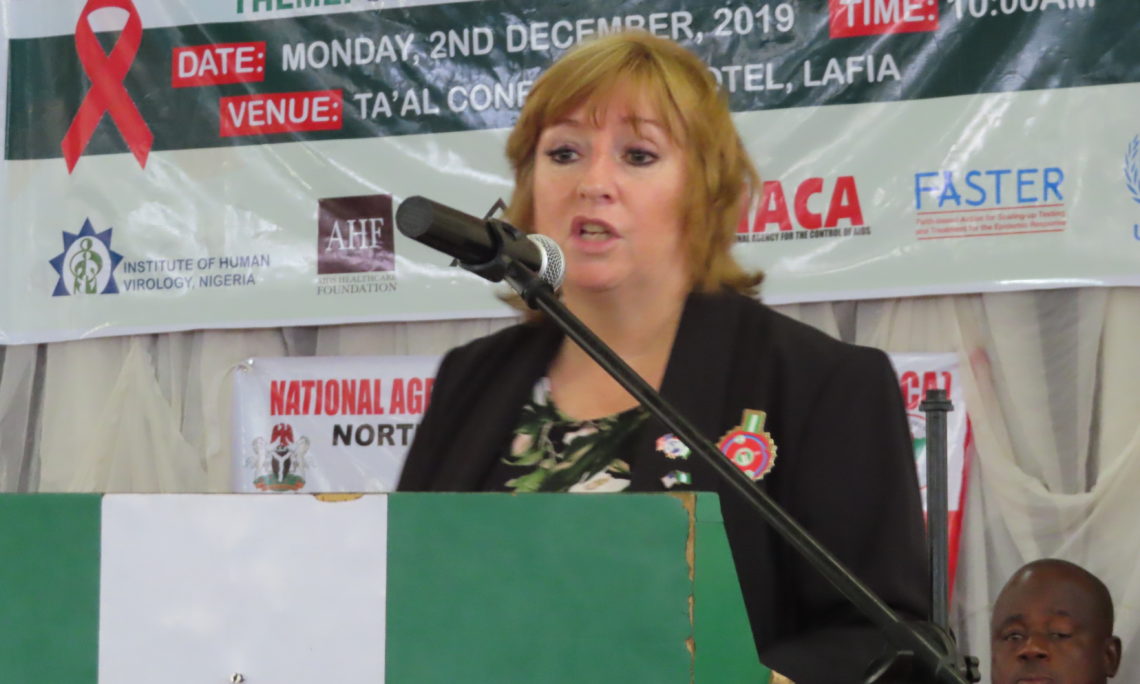 Lafia – December 2-3:   The United States Government through the U.S. Embassy in Nigeria has urged the Nasarawa State Government to increase its efforts towards controlling the HIV epidemic in the state. The call was made by the U.S. Embassy Deputy Chief of Mission, Kathleen FitzGibbon, when she led a team from the US Centers for Disease Control and Prevention (CDC) and the U.S. President’s Emergency Plan for AIDS Relief (PEPFAR), on a courtesy call and advocacy visit to the Governor of Nasarawa State, Engr. Abdullahi Sule.

DCM FitzGibbon commended the Governor and his team for working with the U.S. Government and other stakeholders to put approximately 40,000 people living with HIV (PLHIV) on live-saving antiretroviral treatment (ART) since the beginning of the PEPFAR program in the state. She said while this is commendable, there is an urgent need to identify and put on treatment additional 20,000 PLHIVs that are currently not on treatment. Doing so will not only break the chain of transmission but also move Nasarawa State towards HIV epidemic control.

The Deputy Chief of Mission emphasized the significance of Nasarawa State in the trajectory of HIV/AIDS epidemic control in Nigeria. Its population, geographic location, diversity, and status as a major contiguous border state with the Federal Capital Territory makes it an important area of focus for the delivery of HIV/AIDS services in the country.

She highlighted to Governor Abdullahi Sule the negative effect of the payment of some user-fees which serves as a major barrier to people living with HIV from accessing treatment and urged for the elimination of such fees, particularly fees charged by healthcare facilities for non-essential services or those already provided by PEPFAR.

Ms. FitzGibbon noted the U. S government’s budget increase for HIV control activities in Nigeria, with increased focus on identifying and putting more people on treatment through the ART surge activities in several states, including Nasarawa state.  She noted the increased funding to make anti-retroviral available would enable more people living with HIV to lead healthy, productive lives, especially now that strict adherence to treatment leads to the virus becoming undetectable and therefore not transmittable to sexual partner.

She also requested Governor Sule to prioritize the procurement of additional HIV test kits to support the current PEPFAR initiated surge efforts in Nasarawa State of identifying people living with HIV in communities and populations of people in Nasarawa State. She emphasized that such urgent intervention will help in moving Nasarawa State to reach HIV epidemic control by September 2020.

At the occasion Governor Abdullahi Sule stated that his government commits to the reduction and ultimate elimination of the payment of “user-fee” charges at the point of seeking care in Nasarawa State hospitals and other health facilities, to serve as a major incentive to people living with HIV accessing treatment.

Governor Sule added that the government have prioritized within the limit of its resources the procurement of additional HIV test kits to complement the commodities already being provided by PEPFAR in order to support the efforts of identifying people living with HIV in communities and populations in the State.

The U.S. President’s Emergency Plan for AIDS Relief (PEPFAR) administered by the U.S. Centers for Disease Control (CDC), is implementing an Anti-Retroviral Treatment (ART) surge program in Nasarawa state to rapidly identify and provide treatment to approximately 20,000 people living with HIV who have not previously received such treatment, by September 2020.

The recently released data from the U.S.-supported Nigeria HIV/AIDS Indicator and Impact Survey revealed that there are approximately 1.9 million people still living with the virus in Nigeria. These people require appropriate medical treatment to live a normal and healthy life.

The U.S. Government recently announced support to Akwa Ibom, Rivers, Enugu and Lagos States for the launch of an ART Surge, a program designed to put an additional 500,000 people living with HIV on treatment. The 500,000 people would be in addition to the more than 800,000 people already on treatment as part of the overall PEPFAR intervention.