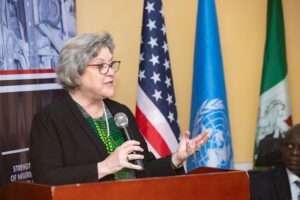 The U.S. is helping establish a state-of-the-art Secure Evidence Storage Facility at the Nigeria Police Force Criminal Investigation Division Headquarters in Garki, Abuja.  In partnership with United Nations Office on Drugs and Crime (UNODC) and the Nigerian Police Force (NPF), this project will strengthen police efforts to apprehend terrorists, kidnappers, and other violent criminals, and ultimately, to secure convictions within a rule of law framework.

This project is funded by the U.S. Department of State’s Bureau of International Narcotics and Law Enforcement Affairs (INL).  The new storage facility will augment NPF’s capabilities in the collection and forensic exploitation of physical evidence.  The initial focus of this project is on the Federal Capital Territory and four states in the Northeast region, but it also will be extended to additional states in the Northwest and North Central regions.

The project will be administered by both Nigerian and international experts from UNODC.  In addition to refurbishing a number of NPF evidence storage facilities, the project team will work with Nigerian police investigators and crime scene specialists to build their capacity to collect and analyze evidence such as fingerprints, tool marks, digital data, and biological material.

In his remarks, IGP representative Tony Olufu Adejoh, noted, “I want to thank the United Nations Office on Drugs and Crime and United States for their most welcome support and sincerely impress upon them that they can embrace us on the fight against terrorism and other serious crimes.”

During the kick-off ceremony, U.S Ambassador to Nigeria, Mary Beth Leonard, noted, “Every stage of the evidence process is important; from the initial collection, handling, recording, storing, preserving, transporting, and ultimately to exhibits being presented in court all have major effect on the outcome of justice.”

Also in attendance were the representative of the Inspector General of Police, Tony Olufu Adejoh, Commissioner of Police, Anti-fraud Unit, Force Criminal Investigation Division, the Chief of the Terrorisms Prevention Branch of The United Nations Office on Drugs and Crime (UNODC), Masood Karimipour, representatives from the Federal Ministry of Justice, the Legal Aid Council of Nigeria, and the Office of the National Security Adviser.