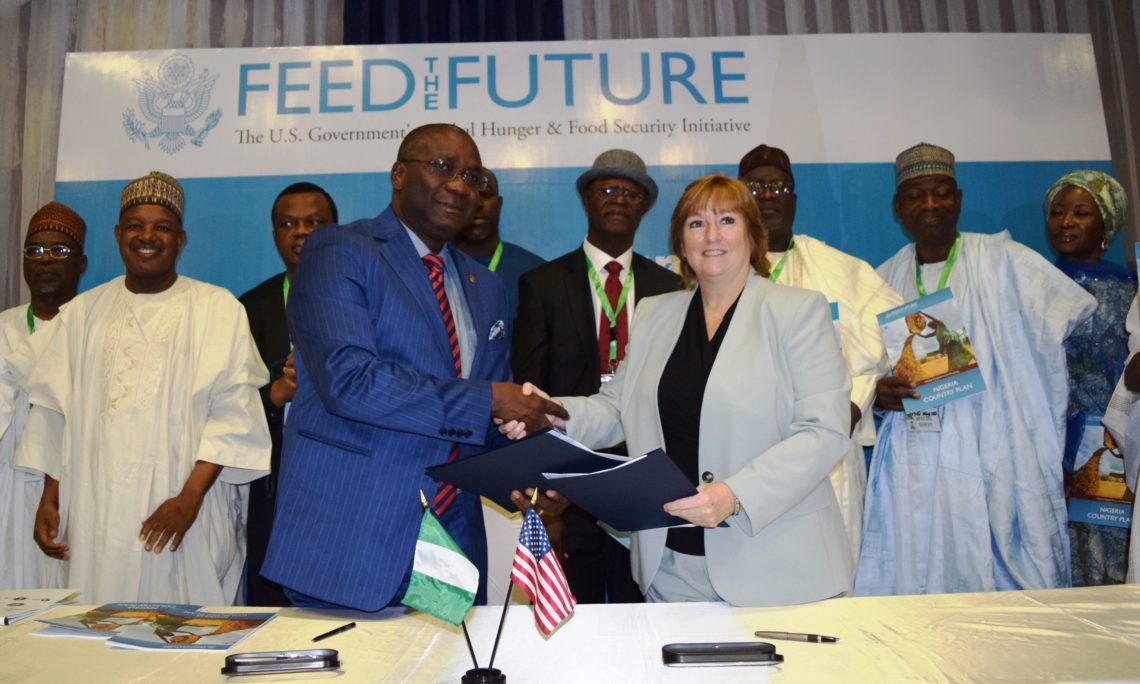 Abuja – On July 18, the governments of the United States and Nigeria jointly signed a declaration of partnership to launch a five-year Feed the Future Nigeria Country Plan to increase investments in food security, build greater resilience, and improve household nutrition in the country.

Feed the Future is a U.S. government initiative coordinated by the U.S. Agency for International Development (USAID) to sustainably reduce global poverty, hunger and malnutrition.

Building on the Government of Nigeria’s priorities for food security and nutrition, at both the national and state levels, the new Feed the Future Country Plan provides a blueprint to accelerate agriculture-led economic growth, strengthen resilience among people and systems, and support a well-nourished population – especially among women and children.

The Feed the Future Country Plan focuses on Benue, Cross River, Delta, Ebonyi, Kaduna, Kebbi, and Niger states, as well as the four northeastern states of Adamawa, Borno, Gombe, and Yobe.  It will develop five of the government’s prioritized agricultural value chains with the strongest potential for increased productivity and enhanced market linkages.  These are aquaculture, cowpeas, maize, rice, and soybeans.

“This Plan will connect farmers with suppliers, improve agricultural extension services and inputs, and stimulate market growth to present new opportunities for millions of households to improve their standard of living and quality of life” said U.S. Chargé d’Affaires Kathleen FitzGibbon, who delivered a keynote address for the American government at the ceremony.

The Feed the Future Country Plan will build on the successes of Feed the Future’s $165 million investment in Nigeria since 2015.  For example, communities benefitting from a previous 2013-2018 Livelihoods project saw a remarkable 22 percent drop in child stunting, and a 53 percent increase in exclusive breastfeeding among mothers.  Partner communities developed trust, forged economic alliances, and were able to allocate more resources while linking agribusiness to increased household incomes.

The Government of Nigeria was represented at the event by Ernest A. Umakhihe, Permanent Secretary of the Ministry of Budget & National Planning, who said “It is our belief that this initiative will reduce hunger, malnutrition and poverty among the Nigerian people.”

Following the launch, USAID staged an exhibition where 45 private sector vendors in agro-processing, agro-technology, nutrition services, and agricultural consulting services highlighted their products.  In his opening remarks, USAID Acting Deputy Mission Director Todd Sorenson said the exhibitors represented a “snapshot of the resources and expertise ready to play their critical part in developing a dynamic, diverse, and market driven agricultural economy.”  In such an environment, the private sector can play “a key role in driving the business of agriculture while helping ensure a bounteous supply of highly nutritional food to feed the nation and provide jobs with growth potential.”

Nigeria is one of twelve Feed the Future target countries, representing its potential and strategic importance to the United States.