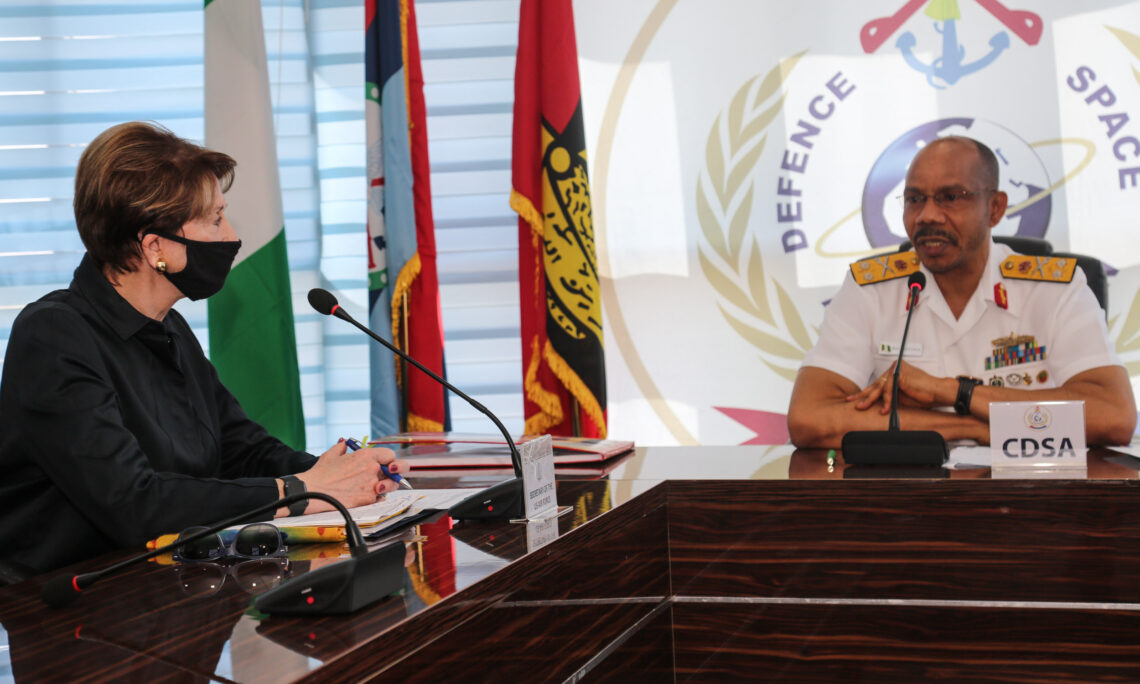 U.S. Secretary of the Air Force Barbara Barrett visited Abuja January 4 – 5, 2021, where she met members of the National Assembly and senior military officials at the Ministry of Defence.  Secretary Barrett’s visit highlighted the positive trajectory of the military cooperation between the United States and Nigeria.  Her discussions covered a range of defense and security matters of mutual interest, including the 2021 delivery of the A-29 Super Tucano aircraft.  Secretary Barrett also toured the Defence Space Administration and initiated the first-ever collaboration between the U.S. and Nigerian defense space institutions.

expressed the U.S. readiness to deliver twelve A-29 Super Tucano aircraft as scheduled in 2021.  Along with the delivery, the U.S. will train 60 Nigerian military pilots, instructors, and aircraft maintenance specialists over the span of 24 months.  The Nigerian pilots will train on the same aircraft that they will fly in combat operations against insurgent groups and terrorist organizations.

Secretary Barrett also was briefed by the Ministry of Defence and the Nigerian Armed Forces on their continuing efforts to strengthen military professionalism through programs such as Air Ground Integration (AGI).  Through AGI, the Nigerian Air Force plans to increase both its tactical and operational competencies.  The training that enhances these competencies will also address the laws that govern armed conflict and respect for international human rights in ways aimed at reducing the risk of civilian harm.

The Secretary also paid the first-ever visit by a senior U.S. official to the Defence Space Administration where she conveyed the importance of being ready to address the novel security challenges in space.  Noting that the U.S. Space Force recently marked its first anniversary following its establishment last year, Secretary Barrett discussed with her Nigerian counterparts the opportunities for bilateral engagement as well as the necessity of developing a long-term vision for security cooperation in space.

Secretary Barrett began her tenure as 25th Secretary of the Air Force on October 18, 2019.  She leads the Department of the Air Force, comprised of the U.S. Air Force and U.S. Space Force.  She is responsible for organizing, training, and equipping Air and Space Forces and for the welfare of 695,000 active duty, Guard, Reserve, and civilian Airmen and Space Professionals and their families.  Overseeing an annual budget of more than $205 billion, Secretary Barrett directs strategy, policy, acquisitions, technology, personnel, and risk management.  She implements decisions of the President and Congress and fulfills Combatant Commanders’ operational requirements.  Previously, Secretary Barrett led business, government, and academic enterprises.  She was an executive of two global Fortune 500 companies, CEO of the American Management Association, and CEO of a hotel.  Her leadership roles included U.S. Ambassador to Finland, Deputy Administrator of the Federal Aviation Administration, and Vice Chairman of the U.S. Civil Aeronautics Board.  She taught leadership as a Fellow at Harvard’s Kennedy School and was President of Thunderbird School of Global Management.

Her full biography may be viewed at https://www.af.mil/About-Us/Biographies/Display/Article/1990786/barbara-m-barrett/.