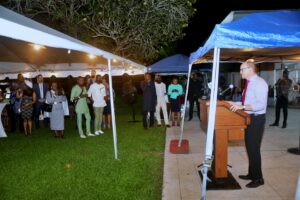 Lagos—For the seventh consecutive year, the U.S. Mission in Nigeria is supporting the Africa International Film Festival (AFRIFF), to further strengthen the collaboration between the Nigerian and American film industries.

This year, Disney and Amazon are leading American creative industry participation at the festival. The two organizations premiered a movie each for the opening night including the participation of some of the cast. Disney hosted the African premier of Black Panther II while Amazon screened The Nanny on Sunday, November 6.

Building on last year’s successes, AFRIFF with the support of the U.S. Mission, will award a $25,000 grant to five emerging animators who produce works in broad areas of climate change, elections and good governance, women’s empowerment, youth engagement, and countering disinformation.

Delivering remarks on Monday at a reception for representatives from the Nigerian and American entertainment industries, U.S. Consul General hailed the growing U.S.-Nigeria cultural ties.   He explained that AFRIFF provides an incredible platform for artists to explore new ideas, promote dialogue, and foster valuable business connections.

“Since 2015, the U.S. Mission has partnered with AFRIFF to bring together American and Nigerian screenwriters, directors, and film experts to share ideas, network, and collaborate.  Our long-standing partnership with AFRIFF help to further strengthen the Nigerian creative industry as well as our strategic partnership. This year’s event highlights the Nigerian movie industry’s creativity and growing global reach,” Stevens said. 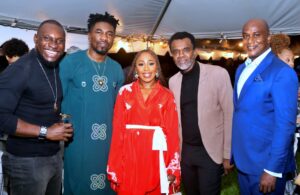 Founder and Executive Director of AFRIFF, Chioma Ude, noted that the 2022 theme of the festival “Indigenous for Global” seeks to raise awareness about African cinema, its vast potential, and the tremendous socio-economic impact it has on African economies.  “Our stories need to remain authentic, and we must find ways to make it global. In making it global, we get the right value and the right pay,” Ude added.

AFRIFF, an annual showcase of the world of filmmaking, with participation from local and international actors, directors, film critics, buyers, distributors, visual artists, film students, and equipment manufacturers, is taking place from November 6 to 12.

The U.S. Mission’s participation in AFRIFF is part of the U.S. government’s ongoing efforts to strengthen the partnership between Nigerian and American filmmakers and strengthen the voices of the next generation of filmmakers.