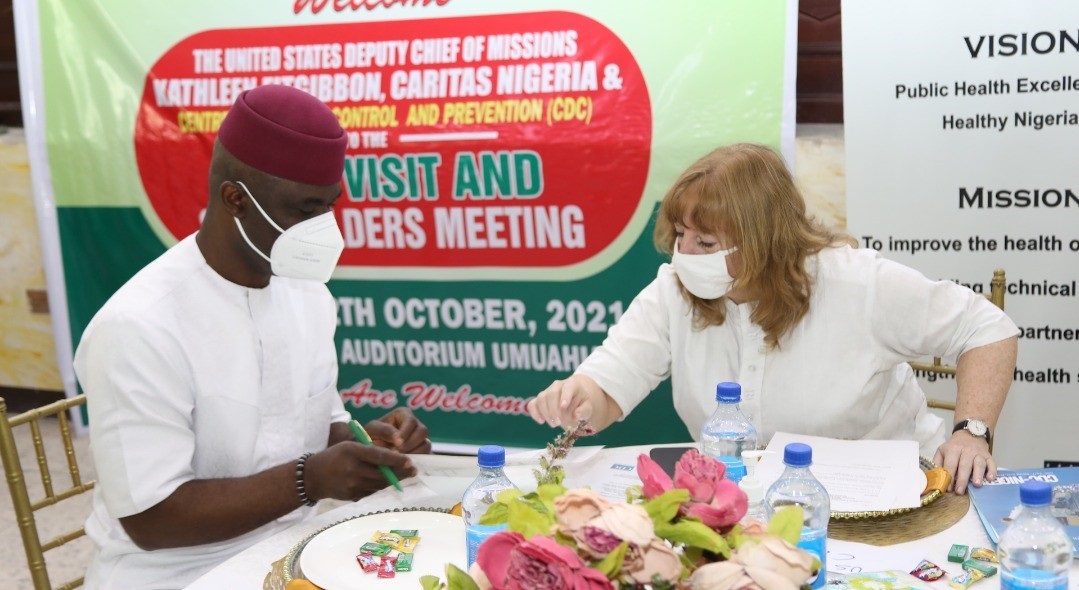 The U.S. will work with the State government and other stakeholders to close the HIV treatment gap by identifying and initiating treatment for an additional 37,000 people living with HIV (PLHIV) in Abia State within the next two years.

They were joined by the Director-General of Nigeria’s National Agency for the Control of AIDS (NACA), Dr. Aliyu Gambo, and the Coordinator of the National AIDS, Sexually Transmitted Infections Control and Hepatitis Program (NASCP), Dr. Akudo Ikpeazu, as well as the representative of Nigerian Ministry of Defense, Health Implementation Program, Brig. Gen. NAE Okeji (Rtd).

CDA FitzGibbon and the delegation met Governor Ikpeazu. FitzGibbon expressed the U.S. government’s commitment to Abia State in its efforts to achieve HIV epidemic control and encouraged the Governor to build on his commitment to the health care system in Abia state, including prioritizing recruitment of healthcare workers to help sustain the expanded HIV program and other critical public health services. In addition, she called for an increased health budget allocation and release of funds, ensuring that the efforts to have additional patients on treatment succeed.

“The U.S. is looking to Abia State to lead and demonstrate a model of sustainable state ownership of the HIV response,” and added that, “this will help to strengthen the partnership between the United States and Abia State.”

In a separate meeting with stakeholders, the delegation briefed participants of the new approach to supporting Abia’s expanded HIV program and called on all stakeholders to actively play a role that ensures all PLHIV are identified and placed on lifesaving treatment.

Ranking as the state with the sixth highest HIV prevalence in the country, Abia has an estimated 58,341 PLHIV.

PEPFAR and CDC’s support will be provided through the implementing partner Catholic Caritas Foundation of Nigeria (CCFN). They will focus on quality HIV clinical and program management skill-building to ensure service delivery transition to the state government, while simultaneously accelerating the initiation of PLHIV on lifesaving anti-retroviral therapy.

PEPFAR supports HIV treatment for over 80% of 1.8 million Nigerians and works with state and federal government agencies to build health systems to achieve and sustain HIV epidemic control.