Demonstrating leadership and respect for Nigeria’s cultural heritage, today the U.S. Embassy and its implementing partner, CyArk, presented the results of its project to document and help protect the Busanyin Shrine in the Osun Osogbo Sacred Grove.  The Director General of the National Commission for Museums and Monuments, Professor Abba Tijani, received the results and praised CyArk’s efforts. 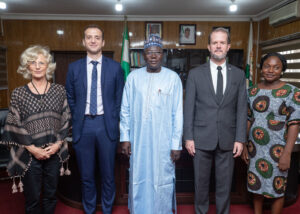 CyArk is a California-based nonprofit organization that specializes in the digital documentation of culture sites.  In 2020, the U.S. Department of State awarded CyArk a $125,000 grant to undertake the Busanyin Shrine project in partnership with the Adunni Olorisa Trust (AOT) and the National Commission for Museums and Monuments.

One of eight monuments within the grove, the Busanyin Shrine was damaged by  seasonal flooding in 2019.  CyArk trained NCMM staff in the use of three-dimensional laser scanning technology to document the Busanyin Shrine.  A principal focus was on using the process of photogrammetry to create a digital model from images combined from multiple sources.  The model offers a unique and precise digital record for use in planning future projects and preservation initiatives, including an engineering plan to protect the monument against future flooding.  In support of future plans, he project team also conducted depth readings in the area of historical flooding to better understand the hydrology of the Osun River.

CyArk also conducted personal interviews project partners and local community members to document the importance of the shrine for educational purposes.  These interviews, along with images and videos of the site, will be merged to generate interactive digital stories and project videos in order to raise public awareness of the site as a cultural treasure.

The United States and Nigeria share a strong commitment to preserve and protect cultural heritage and artifacts, including those in museum collections.  In January 2022, the two countries signed a bilateral agreement to prohibit the illegal trafficking of artifacts, return objects forfeited to the U.S. government, share information on protected objects, and expand cooperation in the areas of technical assistance and educational exchange.

Click here for visual and virtual content from the documentation including photos, videos including drone visuals, and 3D animations.