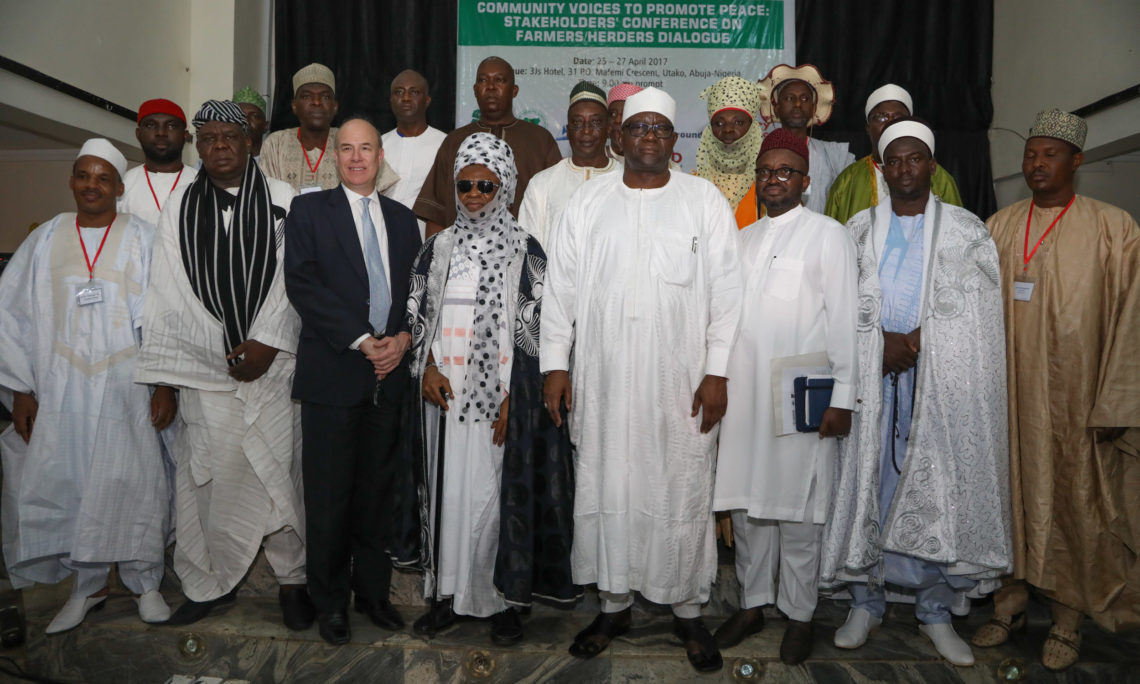 ABUJA – Leaders of farmers and herders as well as religious and ethnic leaders have identified proliferation of arms in the country, diminishing farmlands and grazing pastures due to climate change, and frequent media bias as major contributing factors to escalation of violent tensions between farmers and herders in Nigeria.  These were part of the group’s agreed communique at the end of a three day conference in Abuja April 25-27, funded by the United States government through its Agency for International Development (USAID).

To establish consensus on how best to address the violence, more than 150 stakeholders from 16 states – including 112 farmers and herders as well as 38 religious, regional, and ethnic leaders – convened in a conference called “Community Voices to Promote Peace.” The conference included the Miyetti Allah Cattle Breeders’ Association of Nigeria and the All Farmers’ Association of Nigeria, and came up with 11 concrete recommendations regarding durable solutions to the conflict.

A trio of USAID partners – the Interfaith Mediation Centre, Mercy Corps and Search for Common Ground – worked with the two leading advocacy associations on farmer-herder issues to make the conference happen.

“The United States will continue to support the Government of Nigeria, civil society organizations, and citizens who are promoting peaceful coexistence and tolerance across religious and ethnic divides,” U.S. government representative Blair King, director of USAID’s Office of Peace and Democratic Governance said to applause during his opening remarks to the conference’s third and final day on April 27.

“These last two days have provided farmers and herders a platform to speak frankly but respectfully to each other about their problems, feelings, concerns, frustrations, and perceptions concerning the ongoing violence that is seriously undermining Nigeria’s unity, prosperity, and national security,” said King.

The conference participants’ recommendations include a call to the Government of Nigeria to curb illegal weapons, modernize agricultural practices,

enforce demarcation of farmland and grazing reserves, utilize new technology to reduce cattle rustling, improve systems of conflict resolution, and above all implement new policies acceptable to both groups.

“All tiers of government should give practical effect to the provisions of the constitution regarding rights and responsibilities of citizens and give it priority over any other consideration,” said retired Brigadier General Saleh Bala, special advisor to the Minister of the Interior, reading out the key summary points made by the conference participants. “Nigerians should demand accountability and good governance from their leaders as opposed to the politics of bitterness and bickering.”

Another major recommendation was to provide training to inculcate discipline within the media, who sometimes inflame already tense situations by reporting through the prism of established stereotypes rather than investigating facts of specific incidents.  Likewise, participants called on “some religious and political leaders [to] desist from making hate speech,” based on prevalent bias regarding who is to blame for the escalation. Participants also suggested the terms “crop farmers” and “cattle farmers” would be more appropriate than “farmers” and “herders,” since many people raise both crops and livestock.

Addressing the conference in Hausa, Ardo Mahmud Adam, a leader of herders in Riyom Local Government Area of Plateau State, said no less than the survival of the nation is at stake regarding resolution of the conflict.

“The more we work together, the more we cooperate, the better for the country of Nigeria,” he said.  “I will use my position to try to support these [recommendations], but this conference should not be the last one.  We need to have continuous dialogue so that when the inevitable conflict arises, we can resolve it without violence.”

Kamaludeen Akintunde, president of the National Council of Muslim Youth Organizations, said he was “delighted” at the outcome of the conference but called on government and stakeholders to come together and take action, lest their three days of hard work be in vain.

“These are all familiar issues,” he said. “We must ensure these ideas are implemented individually and collectively, not just give them lip service.”  Stakeholders and government must continue to meet and craft solutions jointly and take specific action to ensure a sustainable and enduring peace.”

Peace Rabi, chairperson of the All Farmers Association in Kogi State, said she plans to do just that shortly after returning home.  “We are going to bring together both our groups with our local officials to promote better understanding between our two groups,” she said.