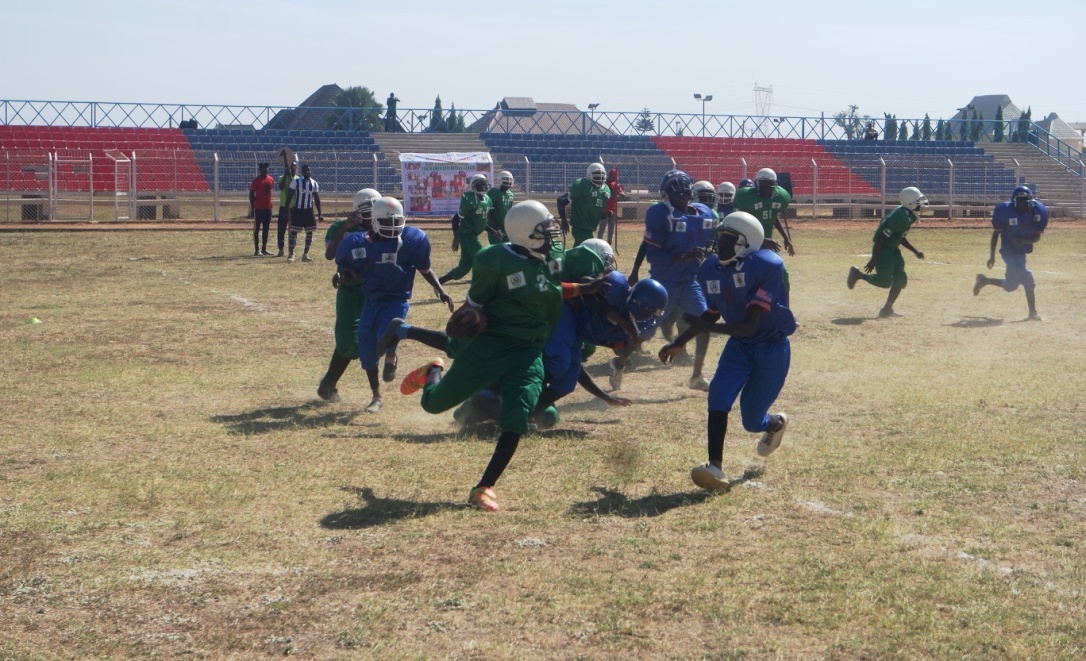 On a brisk, sunny, Saturday morning, December 2nd, Zaria’s stadium hosted the first championship of Nigeria’s inaugural American football youth league. The game matched the MTD Tigers against the ABC Dogarawa Game Shakers. In a spirited game, full of big plays and hard hits, the MTD Tigers prevailed by the score of 26-12.

The U.S. Embassy’s Public Affairs Section funded the inaugural season of the Zaria youth league through a grant. The Public Affairs Section (PAS) supports sports diplomacy projects focused on developing and empowering Nigeria’s youth. Information Officer Russell Brooks attended the game, representing the U.S. Mission. Brooks said the Zaria league proved to be a “worthwhile investment” by the Embassy and he congratulated the players and coaches on their achievements.

The Tigers, coached by Abdulqodri Abdulaziz Temitope, jumped out to an early lead in the first quarter on a run by Gideon Gabriel. Next, the Tiger defense joined the party by adding six points thanks to an interception return for a touchdown by defensive tackle Emmanuel Moses.

The Game Shakers, coached by Amadi Obiora Victor, woke up in the second quarter and drew close with a touchdown by running back Uche Nwaka, then drew even when they scored on a pass from quarterback Lucky Okafor to wide receiver Nazifi  Aliyu.

The second half was dominated by the Tigers as a fumble recovery produced a touchdown by Emmanuel James followed by another  rushing touchdown and two-point conversion by running back Gideon Gabriel which slammed the door shut on the Game Shakers.

The game was watched by an enthusiastic crowd of 432 kids and adults.

Tigers quarterback Savior Attah was selected as the Most Valuable Player of the championship game.

According to Coach Amadi, the Zaria youth league began with 550 kids age 9 to 14 in a boot camp that taught the youngsters the basics of the game. Eight teams were created with 53 players each. Each team employed 4 coaches who ensured that the youth were properly taught the rules and fundamentals of football.

Each league game is composed of 4 quarters of 7 minutes each with a 3 minute timeout between quarters and a halftime break of 5 minutes.

The first-ever youth league championship was a thrilling experience for the head of AFFAM. “I feel great to have initiated the first youth football league in West Africa. Watching the kids play a game that they had no clue about four months ago and now to see them fighting for their respective teams was a great experience for me and them.”

What’s next for youth football in Nigeria? Coach Amadi says he would like to play more games next year, acquire more equipment for his players, and perhaps help to start a similar league in southern Nigeria.

“I hope one day to see football streamed into the home of every family in Africa … I hope to see (American) football challenge soccer and basketball in Africa,” says Amadi.