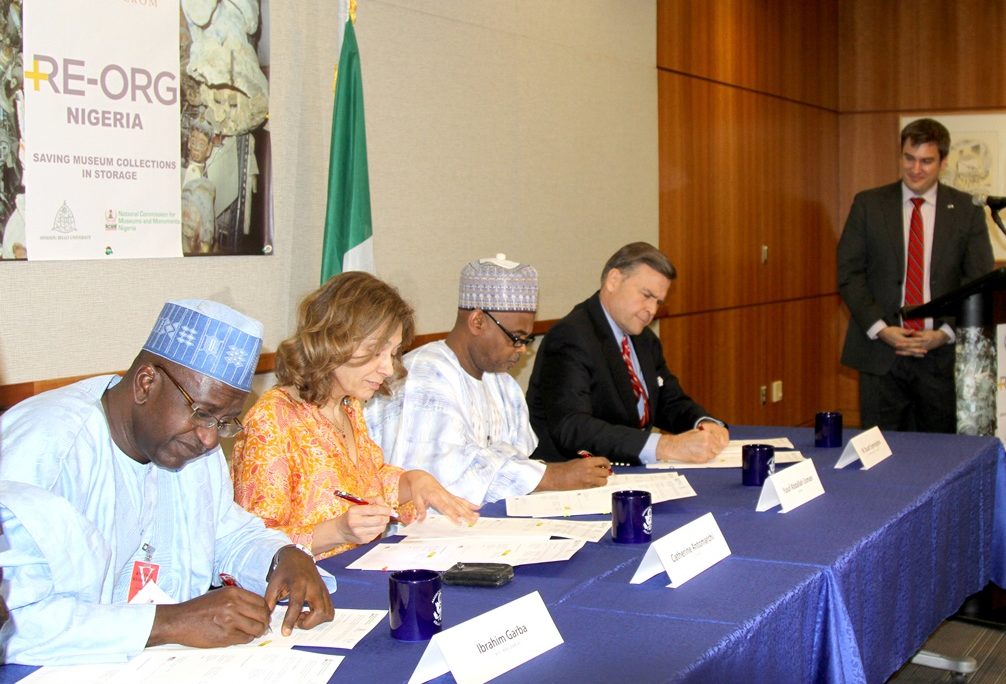 Yesterday (February 13) the United States Embassy in Abuja announced a $116, 000 grant through the Ambassadors Fund for Cultural Preservation program, for the preservation of cultural heritage in Nigeria.  U.S. Ambassador W. Stuart Symington witnessed the signing of the Memorandum of Understanding of the grant between the International Center for the Study of the Preservation and Restoration of Cultural Property (ICCROM), the National Commission for Museums and Monuments (NCMM), and the Ahmadu Bello University (ABU) Zaria. The grant will enable the institutions to improve the storage areas for the collections in 10 Nigerian museums.

In his remarks, Ambassador Symington said, “The people of United States and the government of United States are privileged to be with you today to support this effort.” Symington added, “I don’t think I’ve had a single conversation in which people haven’t said, ‘I love the people of Nigeria,’ and when I asked what is it about the people of Nigeria that you love, literally every person that I spoke to said, ‘I love our cultural diversity’.”

Symington also called on Nigerians to take charge of preserving their past.  “Who is there to make sure a record is not lost or a memory is remembered and passed on?  The answer is all of us … the universities, the museums, the people who do research, and those who tell the stories at home,” he said.

The Director General of the NCMM Malam Yusuf Abdallah Usman expressed his thanks for the U.S. Embassy’s sustained commitment to preserving Nigerian cultural heritage, citing past projects such as the restoration of the Kansakali Gate in Kano and preservation of Yoruba pottery at the National Museum of Unity in Ibadan.  This reorganization project (RE-ORG Nigeria) will train staff from 10 partner museums to prepare storage facilities to accept new objects, preserve existing ones, and make artifacts available for exhibitions.

In 2016, U.S. Ambassadors and Principal Officers worldwide submitted a total of 170 proposals for projects to preserve cultural sites, objects, and forms of traditional expression.  Thirty-nine projects were chosen by the Ambassadors Fund, eight of those in Africa, including “RE-ORG Nigeria: Saving Museum Collections.”

The U.S. Ambassadors Fund for Cultural Preservation supports projects in more than 100 developing countries around the world. Projects include the restoration of ancient and historic buildings, assessment and conservation of rare manuscripts and museum collections, preservation and protection of important archaeological sites, and the documentation of vanishing traditional craft techniques and indigenous languages.