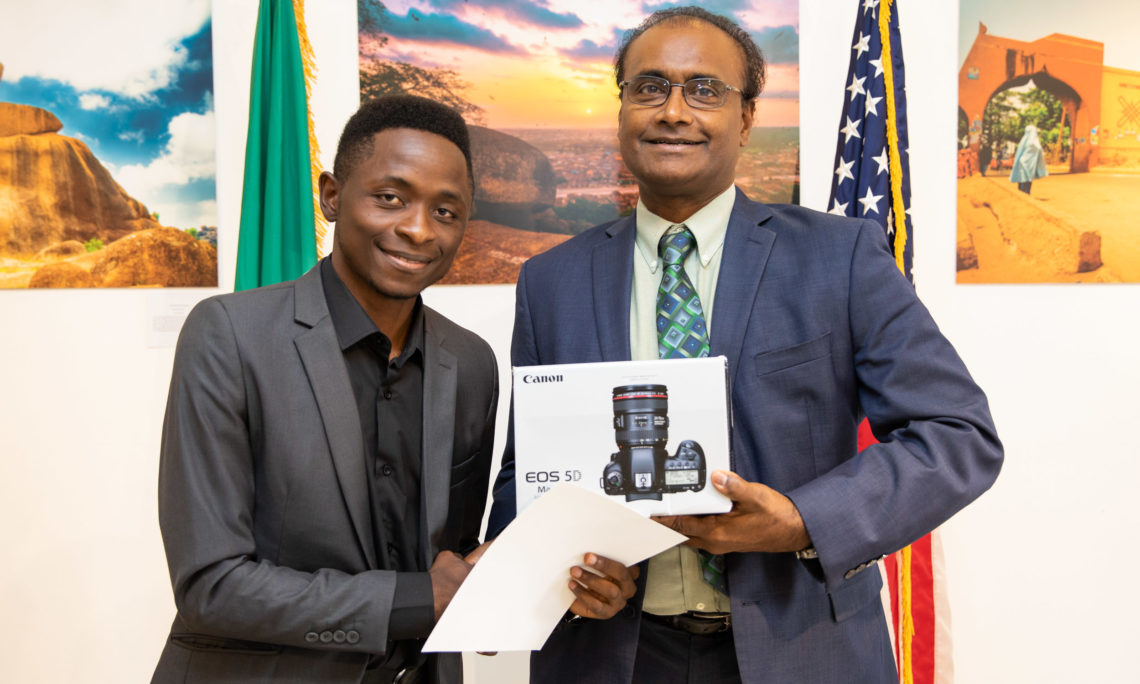 On Friday July 6, 2018, the Country Public Affairs Officer Aruna Amirthanayagam presented prizes to the three top winners of the “NaijaGEMS” photography contest. The finalists were Mr. Ikechukwu Okeagu who won the third place prize, Canon EOS Rebel T7i with Lens; Mr. Matthias Aragbada who won a Canon EOS 80D with lens for second place; and the grand prize went to Mr. Shamaki Rimamkongnde who came in first and won a Canon EOS 5D Mark IV.  Certificates and the book “100 Photographs (the most influential images of all time)” by Geoff Dyer were also given as a consolation prize to the top 20, while the top 50 images are on display at the Thought Pyramid for a week.

In his remarks, Mr. Amirthanayagam thanked everyone who participated in the contest including the judges from outside the U.S. Embassy. He also expressed how striking the photo submissions were. “You are in for a real treat as you look at the images in this exhibition. These are striking pictures that capture the beauty, diversity, and energy of Nigeria. Each reflects the fine eye and skill of the photographer,” he said.

The NaijaGEMs photo contest was initiated by the United States Ambassador to Nigeria, W. Stuart Symington to offer Nigerians an opportunity to showcase the beauty of their country through magnificent photography and tell a positive story through pictures. The contest was open for photo submissions from Friday, April 6, 2018 to Friday May 4, 2018. Participants were asked to produce high-resolution, original photographs of places of beauty that are peculiar to a region or state; the locations were to be symbols of pride to the people and culture of that state. Submissions were done via Flickr and Instagram.  At the end of the submission period, a total of 330 entries were submitted and reviewed by a committee of judges who then selected the winners as well as the top 20 and 50.

On June 28, 2018, Ambassador W. Stuart Symington announced the three winners via a recorded video which was shared on all the U.S. Embassy’s social media channels. He said

the idea behind the NaijaGEMS contest was to ensure that Nigerians who lived in cities and villages and have not had the chance to go round the country, will realize the spectacular beauty of Nigeria. You can watch the video announcing the winners on our YouTube channel or on Facebook or Twitter @USEmbassyAbuja

Congratulations to each of these wonderfully talented young Nigerians!