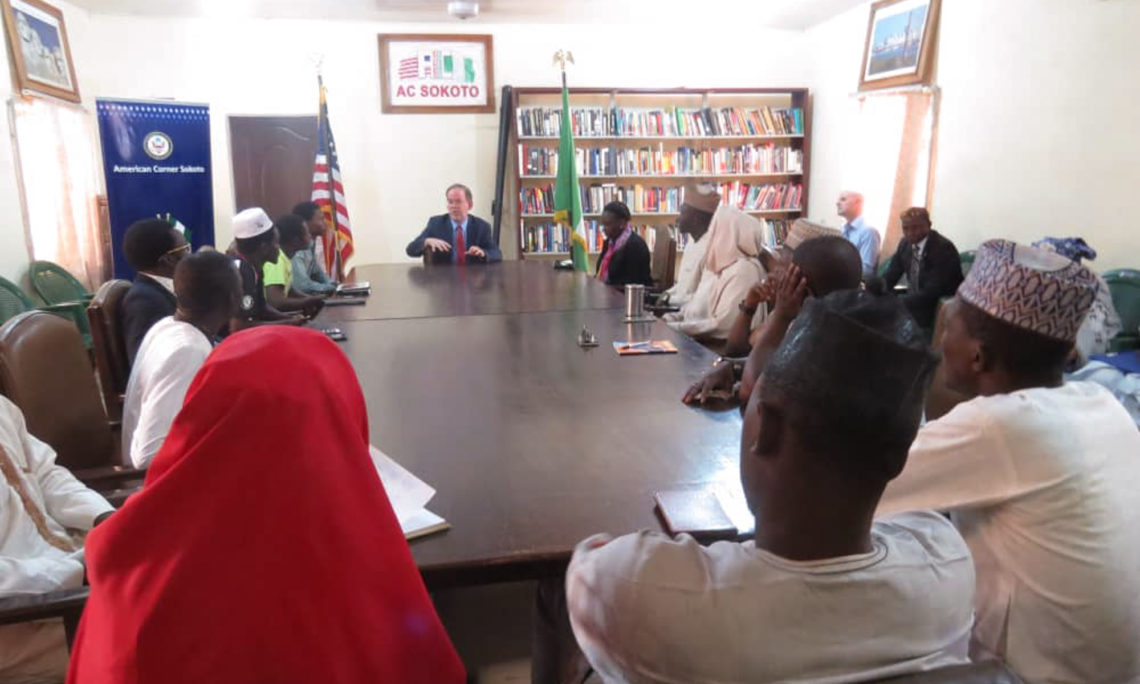 During his trip to Sokoto on March 27, Chargé d’Affaires (CDA) David Young visited the American Corner in Sokoto, where he met with a group of 16 participants of U.S. exchange programs. The programs included the Kennedy Lugar Youth Exchange Students (KL-YES), the Pan-African Youth program, and the Young African Leadership Initiative (YALI – including members from the Mandela Washington Fellowship and the Regional Leadership Program).

Participants spoke about their ongoing studies and projects, shared their personal views on the recent local elections, and discussed key issues they face on a daily basis.  The group noted that while the February (national) and March (local) elections were relatively peaceful in Sokoto, political thugs disrupted calm in parts of the state.  Among the inspiring stories recounted, one participant detailed how he and a group of family and friends, in an effort to take personal accountability for peace in their neighborhood, confronted a group of thugs attempting to disrupt the election.

The group expressed a range of other social concerns as well, including the prevalence of violence against women, drug abuse, the need for local and federal officials to invest in education, and the importance of encouraging entrepreneurship, particularly in the face of a growing youth population unable to find traditional work in the public sector.

CDA Young paid a courtesy visit on Governor Aminu Waziri Tambuwal, and offered congratulations on his re-election. He said; “I want to commend the peaceful nature of the election here in Sokoto,” adding “the U.S. Embassy and the U.S. Government have stressed our principles of wanting to see a free, fair, transparent and peaceful elections and again we are appreciative of what happened here in Sokoto.”

In his remarks, Governor Tambuwal spoke about the commitment he had made to the U.S. Ambassador during an earlier visit. “We … gave assurances that as a government that is responsible to the people of Sokoto state, we would ensure within our limited means; free, fair and credible elections without violence and I believe by the grace of God, as a government and my party, we’ve been able to live to those words and promise,” he said.

CDA Young also held separate meetings with a group of Interfaith Mediators, and Bishop Mathew Hassan Kukah of the Catholic Diocese of Sokoto on how to work together to bring about peace, tackle insecurity, and address humanitarian challenges in Nigeria.