Lagos–– The United States government is committed to supporting initiatives that promote learning, provide students the opportunity to share ideas in an engaging environment, and promote cultural preservation efforts.

Suor hailed the opening as another innovative project of the United States government in Nigeria that will facilitate learning in an engaging environment for students.

“This modern educational space will stimulate curiosity in the minds of children, support learning, facilitate reflection and promote common ideals between the United States and Nigeria.”

“The space will also promote shared values of democracy and encourage robust people-to-people ties,” Suor said at the ribbon-cutting ceremony.

Suor praised Pearl Recycling, a non-profit waste recycling organization founded by Olamide Ayeni-Babajide, an alumna of the U.S. government-sponsored TechWomen program for working with the U.S. Consulate to create the innovative space.

He explained that the U.S. government-funded programs have been of immense benefit to the people of Nigeria, boosting intellectual and cross-cultural capital, and have also become catalysts for professional alumni networks that help address global challenges.

He noted that the recent upgrade of the Old Residency Museum Archive in Calabar with a digital conferencing facility and open space for educational events and the newly opened learning space at the National Museum in Lagos are important additions to the ongoing efforts of the U.S. government to support Nigerian museums and the preservation of Nigerian cultural heritage. 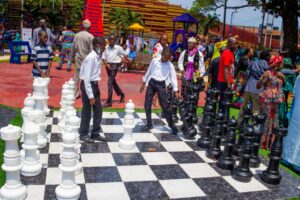 “Since the inception of the Ambassadors Fund for Cultural Preservation program, Nigeria has received 10 grants worth $1 million with projects spread across the country, and these preservation projects benefit both future generations and the growth of the tourism industry,” Suor said.

In his remarks, Prof. Abba Tijani applauded the United States government’s commitment to empowering young people through innovative learning spaces and preserving Nigeria’s cultural heritage. “This space is a world-class space and will provide people the opportunity to engage and learn, and also visit the newly renovated permanent exhibition at the national museum where we keep the cultural artifacts for posterity.”

Permanent Secretary, Lagos State Ministry of Youth and Social Development, Dr. Aina Ayoola also commended the U.S. government for its continuing partnership Nigeria in providing opportunities for children to explore their environment as part of an holistic educational experience.

The Public Diplomacy Engagement Space is funded through the public diplomacy grant of the U.S. Consulate General Lagos and will bring more young people to the Lagos Museum to learn, research, and share ideas.