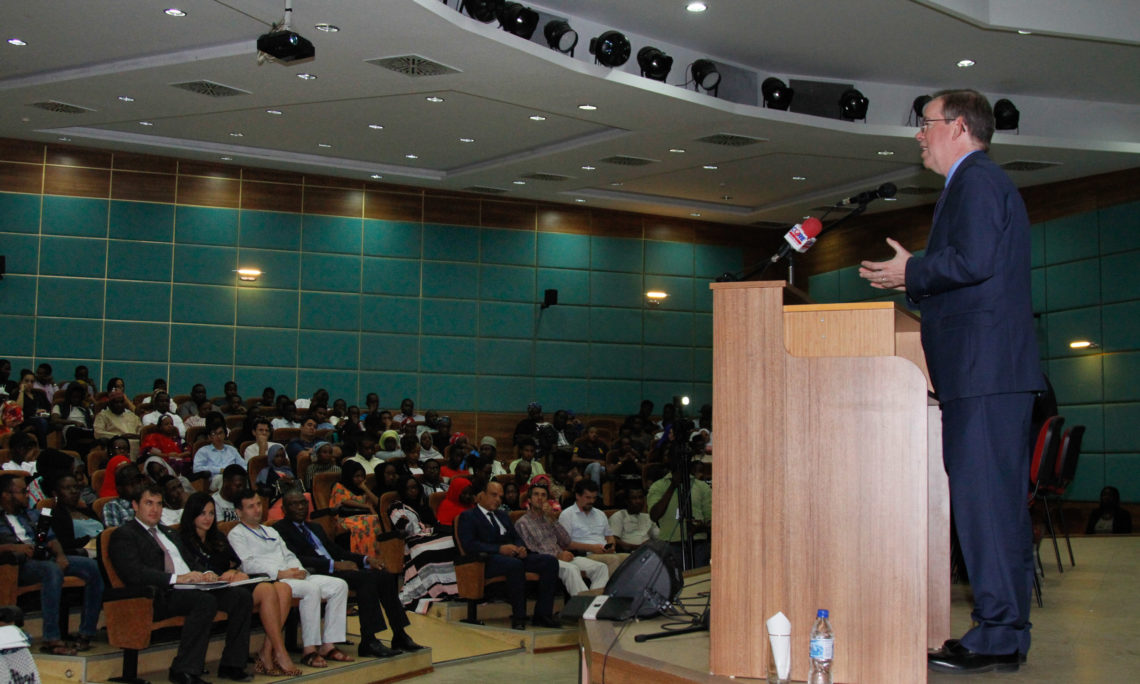 In commemoration of Religious Freedom Day, U.S. Embassy Chargé d’Affaires David Young delivered a speech on Wednesday, January 18, 2017 at Nile University on the U.S. tradition of supporting religious freedom. While addressing the undergraduate students of the University, Mr. Young explained the commitment by the United States to constitutional protection for religious liberty. He said “this week we remember (Thomas) Jefferson and his important role in establishing religious freedom as a fundamental American right.” He added that “religious freedom is central to American identity and values” and that “religious freedom, and the interfaith harmony and tolerance that go hand-in-hand with it, are no less central to the peace, security, and prosperity of our society.”

Mr. Young said “unfortunately, in too many countries around the world, the ability of individuals to live in accordance with their conscience is under attack.” This he said is happening because “centralized regimes and non-state actors use violence and coercion in an attempt to prevent persons from pursuing their freedom of religion or beliefs.” However he said “the United States Government places great importance on protecting religious freedom and promoting interfaith tolerance and understanding.”

While comparing the responses of the United States and Nigeria on the issue of religious freedom, Mr. Young said the constitutions of the two nations are similar. He said even though “together we support individuals’ freedom to choose, practice, propagate, or change their religion,” however, “practicing that constitutional freedom must be a daily and deliberate exercise.  There is no room for violence, or the threat of it, destruction of property, or discrimination in a free society.  And when those violations do occur, they require timely legal action to punish the perpetrators for the crimes committed.”

Mr. Young also used the opportunity to highlight the U.S. Embassy’s commitment to partner with Nigeria on this important issue.  He said “we at the U.S. Embassy and the U.S. Government as a whole are committed to partnering with Nigeria to uphold religious freedom.  One of the central topics in our conversations – including that between President Buhari and President Obama – has been our support for a holistic effort by the government of Nigeria to counter Boko Haram – a terrorist group which destroys the lives of both Muslims and Christians.”  He also said the U.S. Embassy “supports programs that help build interfaith networks that promote religious tolerance,” and these include bringing together Muslim and Christian youth on a football pitch in the spirit of teamwork and fair play, gathering religious leaders from across denominations to speak out and take action against corruption which fuels violent extremism, and engaging community leaders to set an example of tolerance, openness, and support.

Following his remarks, Mr. Young answered several questions from the 200 students and members of the press that gathered for the event.  He affirmed, “Tolerance doesn’t mean giving up your faith.  Far from it.  It means respecting one another even though you don’t agree.”

In his remarks, the Vice Chancellor of Nile University, Dr. Huseyin Sert, also emphasized the importance of religious freedom. He said “religious freedom is one of the indispensable properties in the world that can bridge so many walls documented in history books that are built due to intolerance to other cultures and particularly to other religions.” Dr. Sert said “Nigeria is recognized as one of the world’s most religious countries. In other words, a Nigerian’s identity is deeply rooted in his religious convictions.”  However he said it is worthy to note that “every person is entitled to freedom of thought, conscience and religion, including freedom to change his religion or beliefs either alone or in a group, in public or in private.”