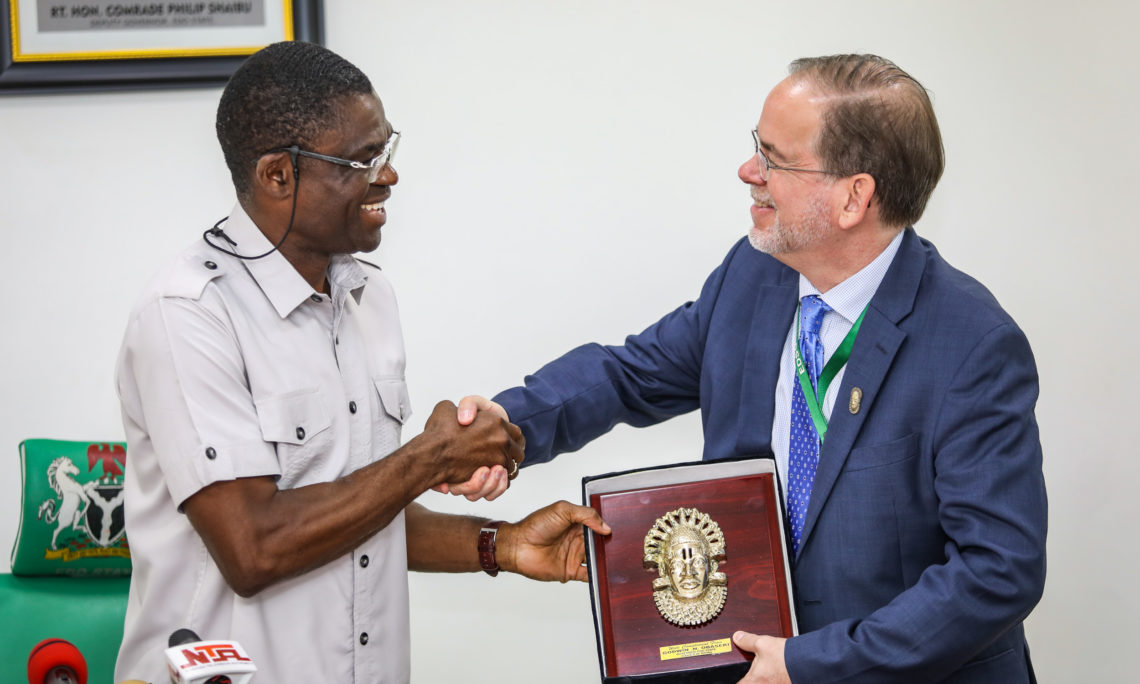 Benin City––U.S.  Chargé d’ Affaires David Young on Tuesday visited Edo State, where he met with government leaders, traditional rulers and civil society representatives with a view to understanding the socio-economic factors that perpetuate trafficking in persons in the state and the multi-faceted efforts being used to eradicate it.

Speaking during a courtesy call on the Edo State Deputy Governor Philip Shuaibu at the Government House in Benin City, Chargé Young commended the state government’s anti-trafficking model and pledged the U.S. Mission’s commitment to expanding the scope of its collaboration with states such as Edo, which serve as a source or transit point for human trafficking.

“We are pleased with the important progress that has been made to combat trafficking in persons in Edo State, through the Three Ps: Prevention, Protection and Prosecution of those individuals involved in human trafficking. This is one of the issues the U.S. government is focused on, as it is a horrific crime and we recognize its long-term effects on people who are trafficked to other countries,” Chargé Young said.

At the palace of the Oba of Benin, where he had an audience with Oba Ewuare II, Chargé Young emphasized the pivotal role of traditional institutions in eliminating the scourge of human smuggling. He lauded the monarch’s leadership and direct involvement in the crusade to end trafficking in the state.

“We note that the Benin monarchy has taken the lead in statewide efforts to prevent young people from being trafficked. Survivors with whom we have interacted confirm that the King’s nullification last year of all oaths sworn by trafficking victims had a remarkable impact, by neutralizing the psychological hold of the trafficking syndicates and encouraging survivors to return home. This, in addition to the laudable efforts of the Oba Ewuare II Foundation, continues to bring freedom to many,” he noted.