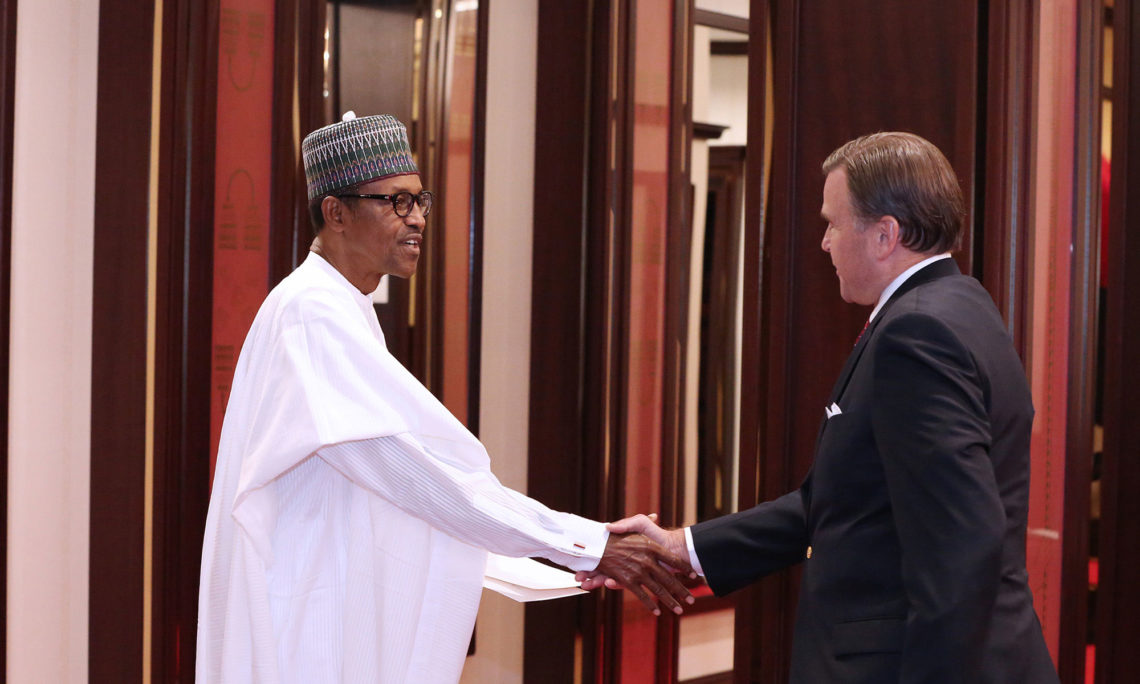 The U.S. Senate confirmed Ambassador Symington on September 28, 2016 after he was nominated by U.S. President Barack Obama, then sworn in as the Ambassador to the Federal Republic of Nigeria on October 31, 2016.

Ambassador Symington, a career member of the Senior Foreign Service, class of Minister-Counselor, was raised in Missouri and comes from a distinguished political family. His grandfather, W. Stuart Symington Jr. was the first Secretary of the Air Force from 1947 to 1950, and served as the U.S. Senator from Missouri from 1953 to 1976. His father, James W. Symington served in the U.S. House of Representatives from 1969 to 1977, representing Missouri’s Second Congressional District.

Symington earned a bachelor’s degree from Brown University, and a Juris Doctorate from Columbia University. He clerked for the Chief Judge of the Eastern District of Missouri, then litigated and practiced corporate law in New York, London, Paris, and St. Joseph, Missouri, before becoming a Foreign Service Officer in 1986.

Ambassador Symington has a broad background in U.S. policy with experience supporting peacekeeping missions, democratic transition and consolidation, counter-terrorism, economic development, and public health. He has represented the United States in Honduras, Spain, Mexico, Ecuador, Niger, Iraq, and several important positions in Washington, in addition to an assignment as the Foreign Policy Advisor to the Commander, North American Aerospace Command and U.S. Northern Command. He also taught at the National Defense University’s Joint Forces Staff College in Norfolk, Virginia.

He has an extensive background in Africa, having previously served as the Chief of Mission in Rwanda (2008-2011) and Djibouti (2006-2008), as well as the Special Representative for the Central African Republic (2014-2015). Most recently, he was the Deputy Assistant Secretary of State for Central Africa and African Security Affairs before being nominated to his current position.

The Ambassador has received numerous Department of State awards and speaks French and Spanish.

Ambassador Symington and his wife, Susan, have two children.