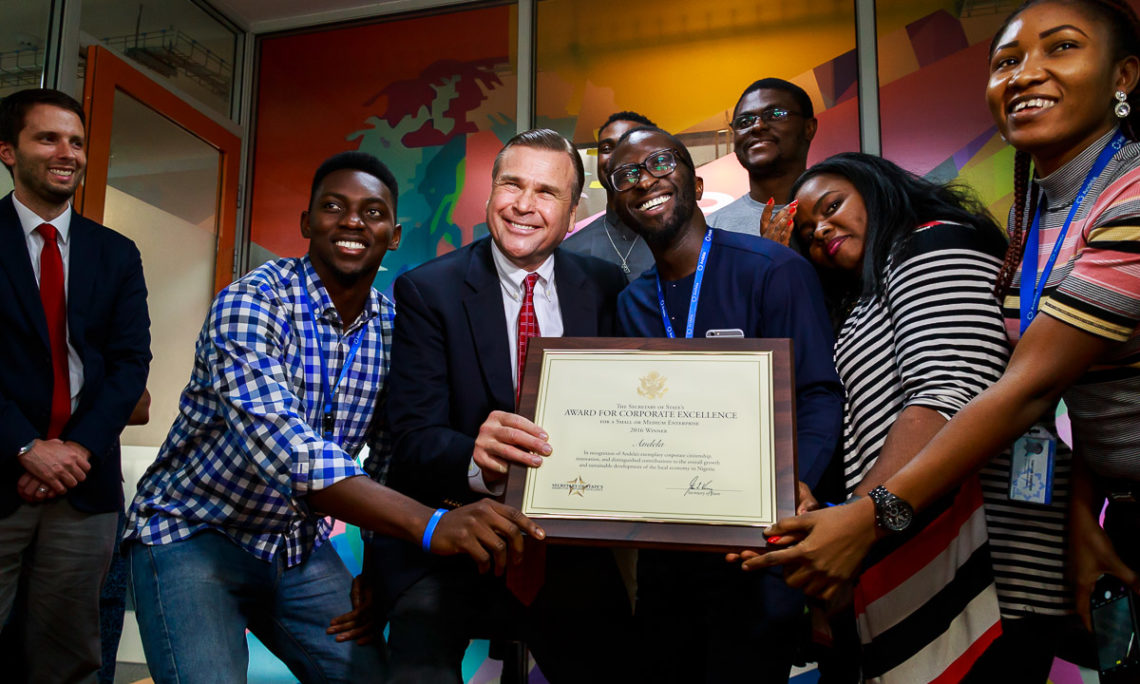 Lagos–––United States Ambassador to Nigeria W. Stuart Symington presented the plaque of the Secretary of State’s Award for Corporate Excellence (ACE) for 2016, in the category of Small and Medium Enterprises, to the global engineering organization Andela in Lagos on Friday, February 24, 2017.

Ambassador Symington noted the award recognizes Andela’s high standards of responsible business conduct and innovation in helping companies grow their engineering teams with the most talented developers in Africa.

“What Andela does with Information Technology, and with its focus on people and a culture of learning and connecting through the internet around the world, is show how Nigeria can create its future and transform the future of the rest of the planet. Nigeria has remarkably talented people and Andela represents the future of Nigeria,” Ambassador Symington said while presenting the award plaque to Andela’s Country Director for Nigeria, Seni Sulyman, during a brief ceremony in Lagos.  The Ambassador explained that the U.S. Mission to Nigeria welcomes Andela’s achievement in creating opportunities by investing and innovating here in Nigeria.

Andela is a global engineering organization that connects leading technology companies and talented software developers from around the world. Andela enables companies to build high-performing engineering teams while providing a platform for talented technologists to accelerate their expertise.

Speaking after receiving the award plaque from the U.S. Ambassador, Mr. Sulyman noted that Andela is very excited and honored to have been recognized by the U.S. government. “Our mission is to empower over 100,000 software developers with a view to creating massive socio-economic impact,” Sulyman added.

The annual Secretary of State’s Award for Corporate Excellence (ACE) recognizes U.S. firms that uphold high standards of responsible business conduct. Established in 1999, the Award seeks to highlight ways in which U.S. companies represent American values in the way they do business, in line with international best practices.