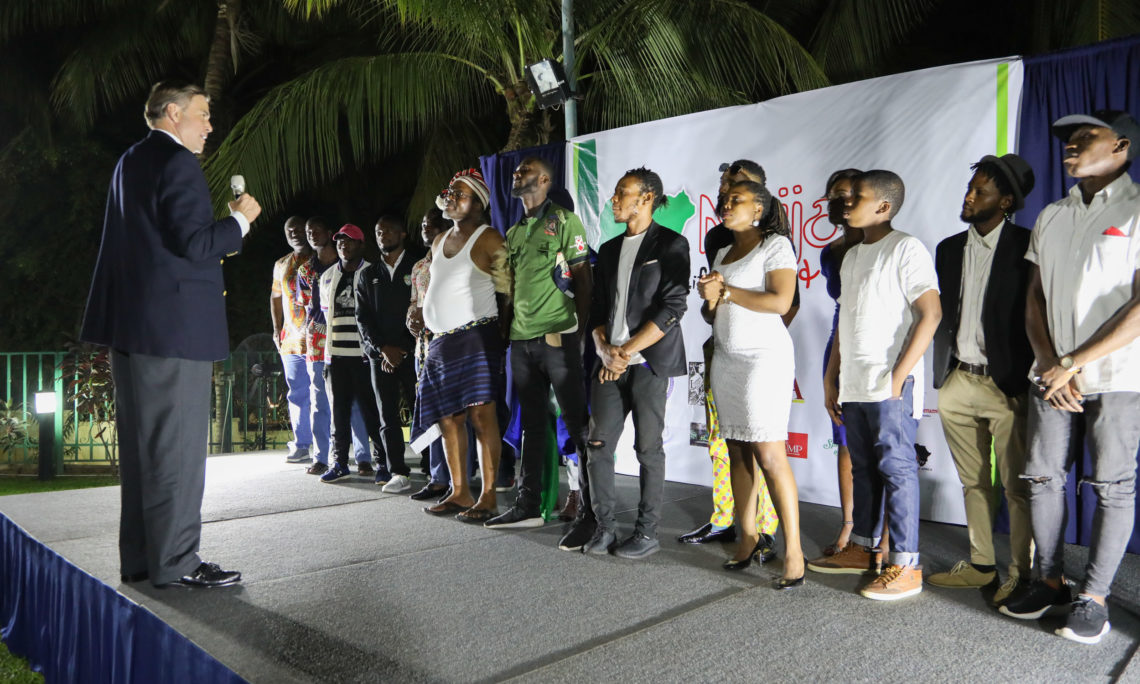 Each year, April is recognized as National Poetry Month in the United States. To mark the occasion, U.S. Ambassador W. Stuart Symington hosted a Night With Performance Poets on April 7.

Titled “Naija: Life, Love, and the Hustle,” ten distinguished performance poets and three dance groups entertained an audience from Abuja’s literary, artistic, and diplomatic communities.     The performances spoke to the challenges and dreams of people everywhere, telling stories of hope and despair, heartache and humor.

Ambassador Symington remarked that National Poetry Month has become the largest literary celebration in the world, recognizing poetry’s vital place in all cultures, including American and Nigerian.

In tribute to Nigerian performers, Ambassador Symington said “many people think Nigeria’s most valuable products come out of the ground, but the

country’s artistic tradition shows that its greatest treasures derive from the hearts of its people.”

He said poets occupy a special place in both the American and Nigerian societies, citing the accomplishments of Langston Hughes, Maya Angelou, Wole Soyinka and Chimamanda Ngozi Adichie.

The poets included Chukwuemeka Obi-Obasi, a 13 year old performance port; Hybrid, a performance poet, thespian, and entrepreneur; Ikeogu Oke, whose works have been published throughout the United States, Canada, and Nigeria; Saddiq Dzukogi who has been published in numerous national and international journals; Odoh Diego Okenyodo, a finalist for the Nigeria Prize for Literature in 2009; Jamila Abbas, a 22 year old student of microbiology at the University of Abuja; Debbie Braide, a chemical engineer and Abuja Literary Society Slam Champion; Reward Enakerakpor, a movie director, television presenter, and grand slam winner of the Abuja Literary Society Poetry Slam; and Awe Olatunder Ebenezer, known as Omoake, who borrows from Yoruba and Pidgin English in his comedic stylings.

“Naija: Life, Love, and the Hustle” was organized by the U.S. Embassy’s Public Affairs and Consular Sections in collaboration with leading members of the artistic and literary communities of Abuja.