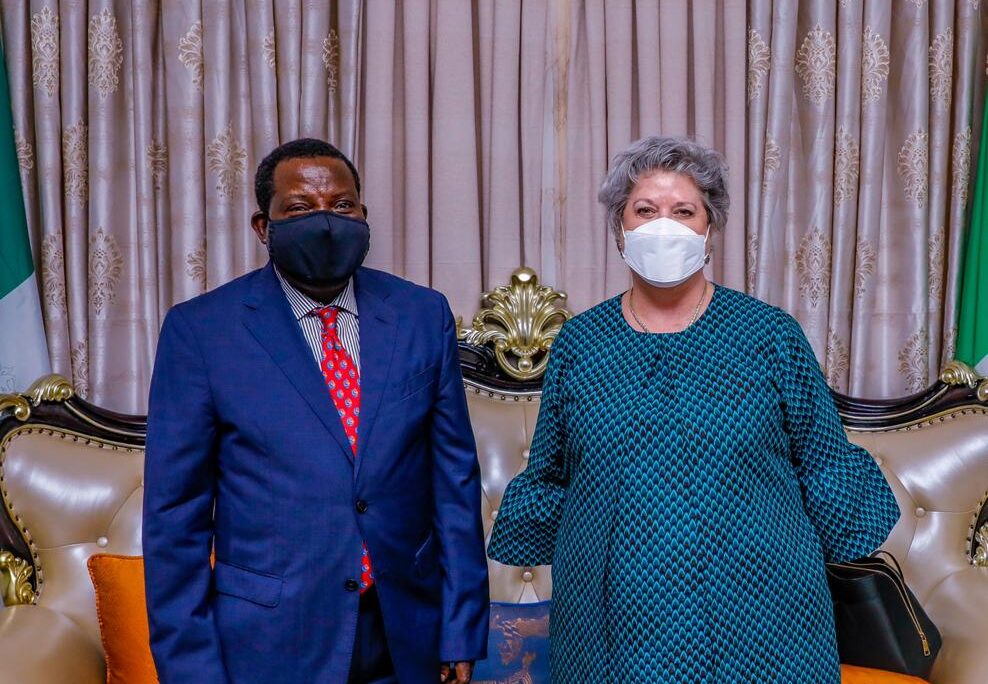 The U.S. Centers for Disease Control and Prevention (CDC), through the U.S. President’s Emergency Plan for AIDS Relief (PEPFAR), is supporting the Plateau Government to implement an Anti-Retroviral Therapy (ART) Surge program to accelerate progress to reach HIV epidemic control.

Ambassador Leonard thanked Governor Lalong for his government’s efforts to control the HIV/AIDS epidemic in the State and acknowledged his directive to eliminate user fees for people living with HIV. She also appreciated the Governor’s continued collaboration with the U.S. Government on the implementation of the CDC Nigeria-led ART Surge program in the State.

The U.S. delegation was in Plateau State to formally launch the ART Surge program. To achieve the goals of the ART Surge program, the delegation highlighted the need to address barriers hindering access to HIV services, which are provided free through PEPFAR support. In particular, the delegation advocated for the elimination of user fees for all people living with HIV, including charges for antenatal care for pregnant women living with the virus.

“We will achieve HIV/AIDS epidemic control in Plateau State if we continue to work together to remove all barriers. Barriers such as user fees, stigma, and discrimination impact health-seeking behaviors among people living with HIV.   Our services must be client-centered, so we need to urgently reduce long wait times in facilities and reduce the number of clinical visits,” Ambassador Leonard said.  “The ART Surge program is helping us identify more people living with HIV and placing them on treatment while maintaining quality care for those already receiving treatment. These efforts are leading to better outcomes for those affected, thereby taking us to the finish line quicker than we earlier thought,” she added.

One of the highlights of the Ambassador’s visit was the formal launch of the Plateau State ART Surge, performed by the state Deputy Governor,

Professor Sonni Gwanle Tyoden, on behalf of Governor Lalong. At the event, the Governor committed to provide 55,000 HIV test kits to complement the over 120,000 already provided by PEPFAR. These additional test kits will help in finding more people living with HIV who are not currently on treatment, thereby accelerating Plateau State towards epidemic control.

Ambassador Leonard also visited the University of Jos Teaching Hospital – JUTH, where she toured the U.S. CDC-supported ART clinic and laboratories, as well as interacted with program beneficiaries and management staff of the hospital.

Since 2004 US-CDC has been implementing the PEPFAR program in Plateau State through its implementing partner- APIN Public Health Initiative. As of December 2020, CDC, through PEPFAR, provides free HIV treatment for more than 769,000 people living with HIV throughout Nigeria.