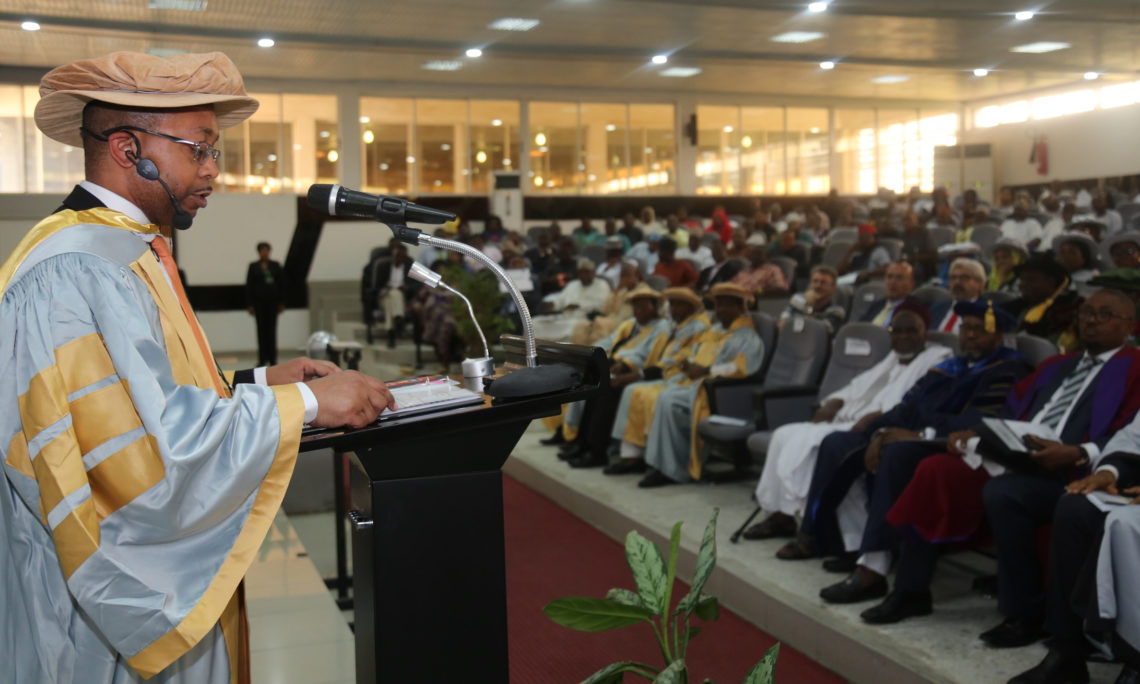 Thank you all very much for that warm welcome!

A special thank you to Chairman Dr. Ahmadu Abubakar; Vice Chancellor, Dr. Tahir Mamman; the Registrar, Major General Muhammed Idris; the Board of Trustees; faculty and other University officials for inviting Ambassador Symington.  Unfortunately, his schedule did not allow for him to attend but, I am honored to be here in his place.

Before I begin my remarks, I want to specifically recognize the professors who have filled these great young minds with valued information that will carry their students through life.

To the parents, you are the primary educators of your children and you gave them the best gift that can be given other than life itself.  And, that is the gift and the love of learning.  That debt can never be repaid.

Finally, to the students, 26 years ago I sat in your place wondering to myself, wow now I actually have to do everything that I planned and told everyone I would do.  It was a bit daunting but, I shook off the nervousness.  And now you have to do the same.

You have stayed committed to obtaining an education that will propel you into the careers of your choice.  Well done and congratulations!  But, there is more work to be done.  So, stay focused.

Now, I’m going to tell you a few stories that I hope will enlighten you and I will try to keep them short.

The first story is about your dreams, setting goals and having a plan.

When I was 9 years old, I knew what I wanted to do for the rest of my life professionally, I knew who my wife was going to be, and I knew where I was going to live when I got older.  Well, I ended up one for three, getting only one of those things right.  I know, you want to hear what happened but, we don’t have that much time so, I will give you the shortened version for the two goals I got wrong.  The planned wife – although she always knew what I wanted, that love story never happened but, we remain friends to this day.  My true fairy tale love came much later and she gifted me with three wonderful children. The second goal that didn’t happen was the place I wanted to live. That one I don’t really care that much about, especially since I live in a much better house – so, I guess you can consider that a win too.

Anyway back to my professional goals and the plan to get me where I stand.  Yes, I know it is very unusual for a 9 year old to have planned his life out in such great detail.  But, I set the goal of being a U.S. Marine and then to become a Foreign Service Officer. I wanted to be a Marine because I loved the military and every male member of my family had been in the military and I looked up to them, especially my Dad.  So, that one was a no-brainer and I did it.

As for the Foreign Service, I discovered this career path while watching TV news in November 1979, a few days before my birthday, when it was reported that 52 American diplomats and citizens were being held hostage by Iranian students that took over the US Embassy in Tehran, Iran.  For 444 days, I stayed glued to the news coverage.  I can’t explain to you why a 9 year old would do that but, I was captivated and knew that I had to become a part of the solution to prevent conditions where my countrymen were held hostage.

I then set a plan for myself starting with going to college and studying Journalism and Public Relations to ensure that I had the appropriate training to become a Public Affairs Officer because I believed that the U.S. Government must present itself differently to ensure that situations like the Iranian hostage incident does not happen again.  So, the goal and the plan was set and there was going to be nothing that would stop me from achieving it.

I will admit the road was not easy and there were times when my plan had to be readjusted to accommodate the realities of life but, I was going to achieve my goal no matter what happened.

So, your first lesson is this: Life will always throw obstacles in your way and may alter your plan but, through your perseverance in the pursuit of your goal, you will get there.

Remember this also, dreams without goals are just dreams and they ultimately fuel disappointment.  Always have set goals for yourselves, whether they are life goals, daily goals, monthly goals or yearly goals.  Most importantly, have a plan for each of those goals.

U.S. President Harry S. Truman once said, “It’s amazing what you can accomplish if you don’t care who gets the credit.”

Which leads me to my second story.  Each and every one of you in this room has the power within you to make a difference.

For the first 8 years of my professional life, I was not in my chosen profession but, I continued to work towards it.  During that time, despite the disappointments, I truly believed in the promise of what the United States stands for, although the country’s leaders have not always lived up to those commitments to its citizens.  I worked hard to make a difference and became a Legislative Fellow for a member of the U.S. Congress.  Utilizing my acquired knowledge from college and the U.S. Marine Corps, I managed to influence my Congressman on a host of issues that were important to me and were up for consideration to become laws.

Although I was not always able to get my preferred outcome, I was in the room and my voice was heard.  My name was never on any legislation.  I was never recognized or honored by anyone in front of large or influential groups, except internally by my boss.  But, that did not matter to me.

My focus was on making a positive change in the lives of as many people in the country as I could while I was in that role.  I left that position three years later with the sense of accomplishment and knowing that I made a difference in many lives across the country.

As I stand here before you, I continue to serve my country in ways that I would have never imagined.  I have been making a difference on behalf of the United States in countries all over the world and now I am doing the same here in Nigeria.  My position here is to promote and expand cultural and professional exchanges to further the Nigeria-United States relationship.  Because of the importance of Nigeria to the United States, that makes me a very busy person.  Since arriving here just two months ago, I have already traveled to three states and met more than a thousand Nigerians of all walks of life.

Many of those were the more than 180,000 alums of the Young African Leaders Initiative (YALI) – if you aren’t apart of it, please consider it – and there are thousands more International Visitor Leadership Program alums, including Fulbright and Humphrey participants.

Of those that I have met, the energy and desire from these alums to make a difference and improve lives of all Nigerians is remarkable.

Separately, I have met other young people, from the early teens to the mid-30’s, who are eagerly developing programs and projects that are making an impact on local communities throughout Nigeria.  I was most impressed with 10 teams of high school students who were competing in the YALI Young Leaders Assembly’s Beyond School Community Challenge Finals.  These students identified problems plaguing their communities and came up with solutions.  Many of those solutions revolved around sanitation, clean water, and food production.  To me, each one of those teams were winners because they found a way to change their community for the better.

Therein lies Lesson number 2: Each person in this room has the power within themselves to change your community, your country and the world.

Just three days ago in Ilorin, I met an 11 year old boy named Jamaal that had the courage and determination to try to meet Ambassador Symington to tell him what he wanted to do for Nigeria.  Although this young man did not get the chance to meet the Ambassador, I spent some time with him to talk.

At this young age, he understands that there is much to do in Nigeria and had a few ideas himself on how to solve those problems.  But, Jamaal is a boy. He should not be so concerned with issues of this magnitude.  He should be outside playing or thinking about his studies, not attempting to carry the weight of a country on his shoulders.

This is where you come in.

The majority of the voting population in Nigeria is young.  You have enormous power that has not yet been fully realized.  What you want for your country is in your hands.  There is absolutely nothing that any other country can do for you that can improve your country.  Each and every one of you have that power. You can begin that process of making your voices heard starting today.

If you want your communities to be safer, do something about it.  If you want the economic situation to improve for all Nigerians, set a goal, develop a plan and execute it.  If you want transparency in government and want to break the back of corruption here in Nigeria, you have to make the conscious choice of walking into the polling station in February and voting.  When you do that, take a friend or two with you.

To support you in the lead up to the election, the United States is actively promoting a fair, transparent and peaceful election process through its public statements, private diplomacy, and development assistance over the next few months.  However, let me be clear, the United States has no preferred candidate. The decision on who leads your country is yours alone.

As I was alluding to a few moments ago, we are working with our diplomatic allies and like-minded local partners in this effort to support your country.  One of those efforts is the YALI Network campaign “NaijaVotes: Make it Count” (#9jaVotes2019) and I urge you to join them. Together, we can boost voter participation, promote voting with integrity, encourage truth and accuracy in information-sharing, speak out against hate speech, and inspire communities to reject violence.

But, after the elections are over, you must hold your political leaders accountable to the needs of Nigerians.  In addition, you must harness the potential of Africa’s tremendous youth bulge as a force for economic ingenuity and prosperity, which is a counter narrative to violent extremism and despair felt by so many Nigerians, particularly those in Internally Displaced Persons camps like Kuchingoro.

In closing, if you remember anything I have said today, remember this – your final lesson: nothing that is great and lasting in Nigeria comes from the outside; it must come from Nigerians.  It is critically important that all of you play a supportive role in ensuring that Nigeria once again sets the standard for free and fair elections on the continent, as you did in 2015.

Thank you all very much and congratulations once again!