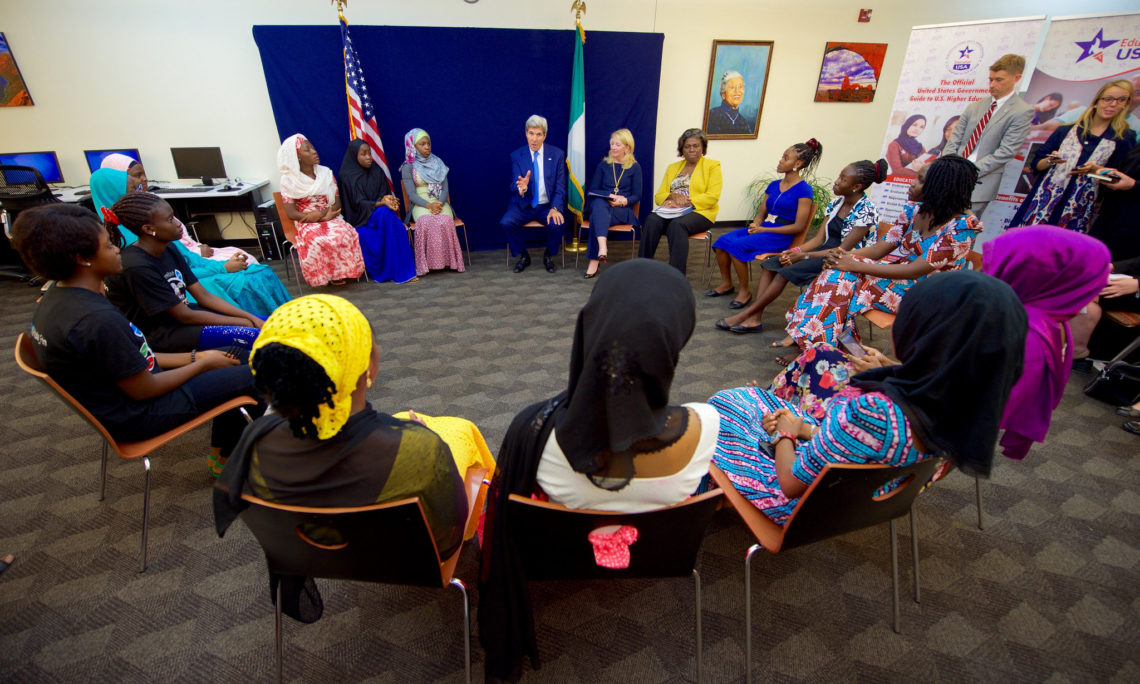 Secretary Kerry, U.S. Ambassador-at-Large for Global Women's Issues Catherine Russell and Assistant Secretary Thomas-Greenfield Meet With a Group of Young Women who Have Been Empowered, or are Encourgaging Others to be Empowered Through Education in Abuja

SECRETARY KERRY: Well, thank you, Cathy. First of all, let me thank you for your tremendous work and leadership. We’re very proud of – Ambassador Russell’s really been at the forefront of leading efforts like this around the world, and I’ve seen her in more places around the world than I see her in Washington at the State Department. (Laughter.)

This is a privilege for me. I am a father of two daughters, and they’ve both been very lucky to have great opportunities in their lives. One is a doctor today and one is a filmmaker today. And I also had the privilege – we are in the Rosa Parks Room here. I don’t know if you know that, but – or all of you know who Rosa Parks is, but Rosa Parks was a very, very famous civil rights activist in America who sat in a bus and refused to move when people told her she had to move, because as an African American, she wasn’t allowed to sit where she was trying to sit. But she stayed where she was and she became a symbol of people standing up and fighting for their rights. So she sat down, but she stood up, if you know what I mean. And it was a symbol to people – it inspired a movement. All of you are inspirational, and I really appreciate your being here.

I know you face enormous challenge of – as Cathy said, there are millions of young women not in school, who don’t even have the opportunity to go to school. There many, many too many young women who are pushed into a forced marriage at a young age. And so we’re working very hard on a program that is about women’s choice, about women being able to make choices. And I started a program about young adolescent girls’ empowerment within the State Department, which Cathy is busy implementing all around the world. And what we’re trying to do is point out that – the famous Egyptian poet, Hafez Ibrahim, said that you educate a woman, you create a world, you create a community. It’s how you, in fact, change things.

And so the work you’re engaged in could not be more important. I know some of you are involved in technology and computers and writing code and doing different things, but I want to hear from you today sort of how we can together work in order to empower everybody to be able to make their own choices. We long ago learned in our country that you cannot build the community that works, leaving half the people in the community on the sidelines. You can’t live to your full potential as a nation unless you have your whole society engaged. And so that’s really what the poet meant when he talked about if you educate a woman, you create a nation. You’re creating something much more out of people being able to make their choices and be able to be involved. And of course, the third part of this is – you’ve got the forced marriage, you’ve got the education issue. You also have this issue of mutilation, which is something that obviously is cultural; we understand that. But again, it runs counter to the empowerment of an individual and to the rights of an individual person.

And so I salute you for your courage, I salute you for your vision and your commitment to try to help to change things, and we want to work with you. USAID has committed $100 million to this effort to be able to help people to make their own choices and to be educated about what those choices are. And it’s – it won’t happen overnight, it’s long, hard work, but it takes the individual commitment of people like yourselves to be able to try to make it happen.

So I would be delighted to hear from you and I hope we can just open up and have a good conversation.