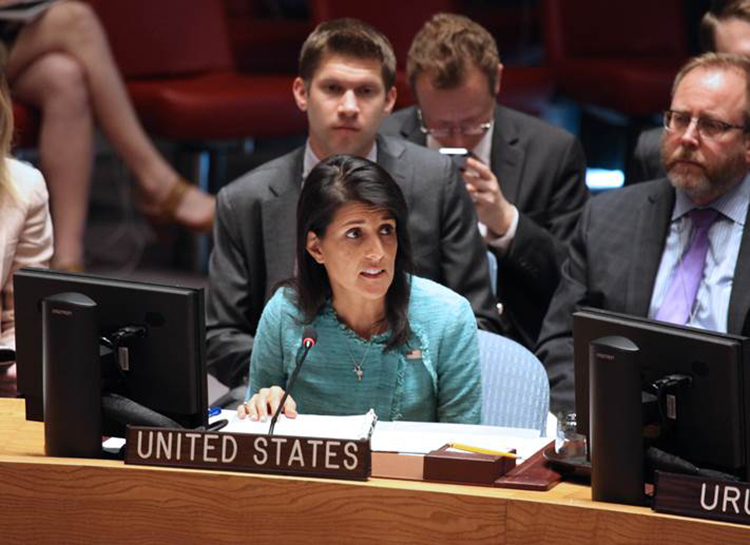 Thank you, Ambassador. Thank you to Deputy Secretary-General Mohamed, Mr. Bousquet, and Mr. Tamburini for your briefings today.

In the marshes of South Sudan, famine means that people are trying to survive on water lilies. The families hiding in these swamps have almost no other sources of food except muddy lily stems to keep themselves alive. But hard as it is to believe, for these people, the alternative to starving in the marsh is even worse. Staying home means facing the soldiers and armed groups who have been robbing, raping, and murdering civilians in villages across South Sudan. So to try and survive, they hide in the marsh and eat the water lilies instead.

These desperate people are not alone. Far from it. Across South Sudan, Yemen, Nigeria, and Somalia, 20 million people are at risk for famine. Twenty million people. That would be the largest food security emergency since World War II.

Some describe this level of suffering as unimaginable. But it’s not unimaginable, because we can actually see what’s happening, just like the people I described in the marshes of South Sudan.

In Nigeria, those who have liberated towns from Boko Haram have reportedly discovered people eating grass and bugs off the ground. In Yemen, families cannot afford to pay for the transportation of their starving children to the few treatment centers that are still open. In Somalia, some mothers are forced to walk more than a hundred miles with their crying children just to find a reliable source of food and water.

In each of these places, people are making difficult and dangerous decisions – choosing which of their children to feed, or even marrying off their children to get food on the table. No one should ever be forced to make these decisions, yet they are happening every single day in Nigeria, South Sudan, Yemen, and Somalia.

These people are not dying from some natural disaster, but from something manmade: armed conflict.

There is more than enough food for everyone on this Earth, including everyone in the four stricken countries. Since last fall, the United States has given more than $1 billion in assistance to these four countries. In 2017, the United States has provided one quarter of the humanitarian funding for these countries, according to UN data. The United States will continue to lead in bringing together resources to help overcome this crisis. And, as we heard today, others are stepping up too, with the World Bank expanding its operations to include famine response for the first time. These funds provide food and clean water, specialized nutrition and medical care, shelter, education, protection, and other life-sustaining services. Every person deserves this. We need the international community to step up by donating to our brothers and sisters in need.

Unfortunately, access remains a key obstacle. Because of war, food cannot reach the people who need it. In South Sudan, Yemen, and Nigeria, warring parties need to let the food in. In Somalia, the challenges caused by years of conflict with terrorist organizations are compounding the impact of a drought. So the answer to famine is not rocket science. The answer is that we must put pressure on armed groups to allow food into places that don’t have it.

The Security Council has the power to help, but each of us needs to show the courage to act. It’s easy for us to say there should be access for humanitarian aid. But think again about the families pulling up water lilies in South Sudan. Or the families in Yemen who have to watch their children wither away because they have no money to get them to a hospital. If we had to look those people in the eye, we would do more than just say access is important. We would act to put maximum pressure on warring parties to actually open up roads and ports to food deliveries. We would act to impose real consequences, like sanctions and arms embargoes, when parties resist our demands. We would hold all governments accountable when they refuse to allow access to help their people in need.

The longer we wait to act, the higher the cost. Humanitarian relief organizations, partnered with the UN, continue using every avenue to get aid to those in need. When roads are closed, they charter airplanes to drop food from the sky. When fighters set up checkpoints, aid workers face down men with heavy weapons to negotiate their way through. But the risks can be huge. In South Sudan, 84 aid workers have been killed since December 2013 – many losing their lives while trying to deliver food and medicine. The United States salutes the incredible bravery of all who are trying to work in these impossible conditions.

Rather than put humanitarian organizations at risk, we should focus on solving the immediate need – guaranteeing access and holding governments responsible when they do not comply. We must also remember that we are charged with helping end these armed conflicts that are causing famine in the first place. All of us have this responsibility. When we have tools to help people in need and to change the behavior of those who cause so much suffering, we need to use them. Famine should not exist in this day and age. My hope and request is to have the political will and courage for all of us to change the direction of these famines before it’s too late.