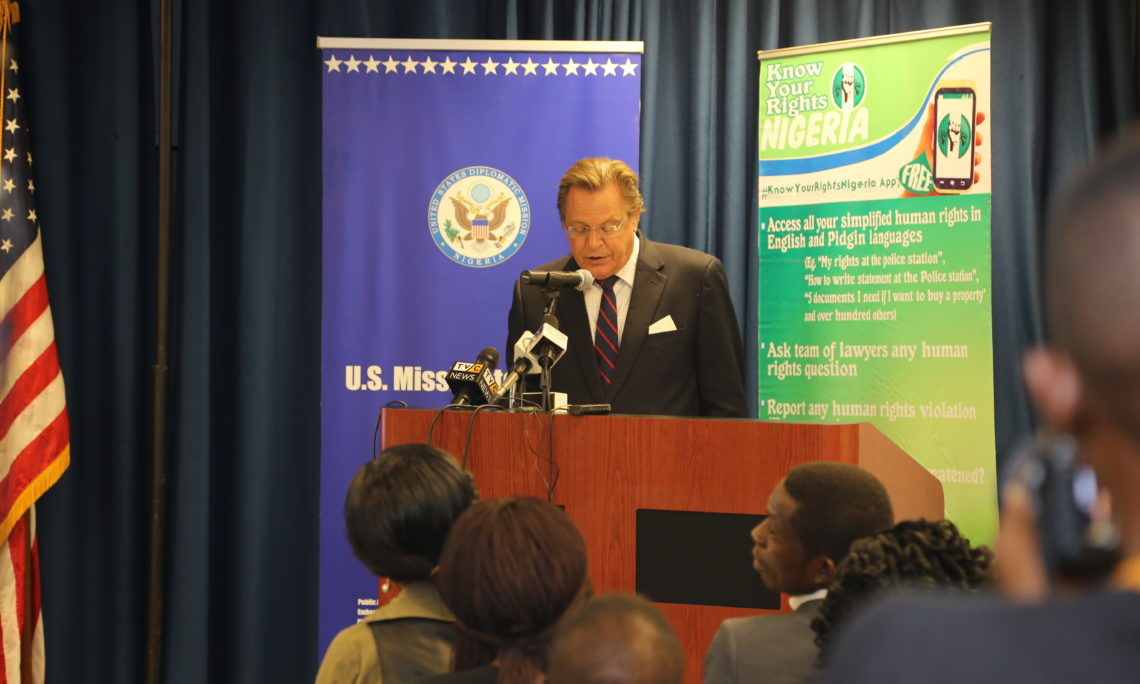 I want to acknowledge Mr. Adeoloa Austin Oyinlade and the work he has done to strengthen respect and support for the protection of human rights in Nigeria.

Over the years we have turned to Mr. Oyinlade for his insights on the status of human rights in Nigeria.

As long ago as 2012 he spoke at our election night event.

It was my pleasure to provide Mr. Oyinlade with a second small Public Affairs grant in 2017 so that he could continue his work in bringing his “know your rights” app to a wider Nigerian audience.

As some of you may know, in 2016 Mr. Oyinlade launched his first “know your rights” app.

The app, which was accessible in English and Pidgin on android phones, simplified human rights law, explained the safeguards available, and gave the user access to more than 50 human rights lawyers who provided advice free of charge.

It is my understanding that a number of you are part of this group of lawyers who are providing advice pro bono.  Thank you.

Since it was launched that app has attracted more than 50,000 users.

Recently Acting Assistant Secretary of State for African Affairs, Ambassador Yamamoto explained that the United States has an ongoing commitment to Africa.

As one of the most important countries on the continent, given its large population, thriving commercial enterprises, and strategic geopolitical location Nigeria is critical to Africa’s prosperity and stability.

Furthering our strong bilateral relationship with Nigeria, and building on Nigeria’s historic, peaceful transfer of power we continue to press for progress to strengthen Nigeria’s democratic institutions.

We seek to advance these goals by developing relationships with the government, faith communities, and like you – civil society organizations.

On Friday, April 20 many of you may know that the Department of State released its 42nd country reports on human rights practices.

As Acting Secretary of State Sullivan explained, these reports are a natural outgrowth of our values as Americans.

Promoting human rights and the idea that every person has inherent dignity is a core element of this administration’s foreign policy.

The Consulate’s support of Mr. Oyinlade’ s app is an example of what the U.S. government is doing to support the protection of human rights.

In the new app, people will now be able to access it in Pidgin, English, Hausa, Igbo, and Yoruba.

As in the past the purpose of the app is to simplify and raise awareness among all Nigerians of their human rights.

I particularly appreciate that not only are people educated about their rights but they have access to free legal advice as well.

I thank you again for coming today and all of your efforts to promote and defend human rights.

I emphasize what Ms. Nauert, the Department spokesperson said, “The United States government will continue to support those around the world struggling for human dignity and liberty.”