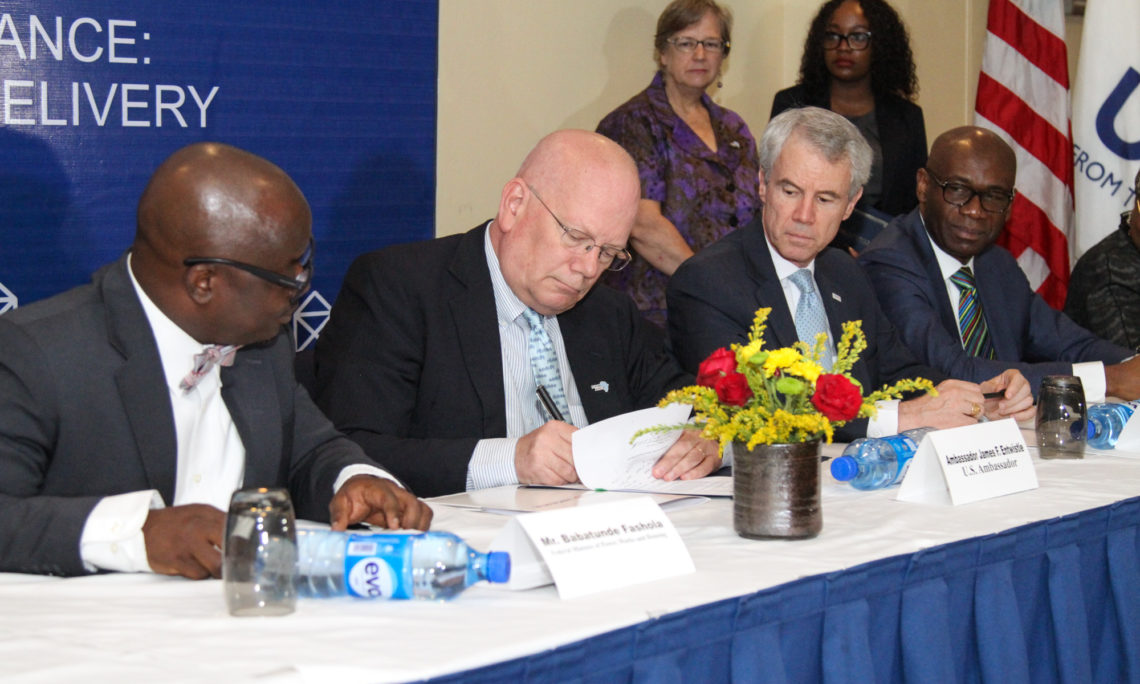 (as prepared for delivery)

Good morning.  On behalf of the U.S. Mission to Nigeria, I am pleased to witness the signing of this Memorandum of Understanding (MOU) in support of the Abuja, Benin, and Eko distribution companies (DisCos) under Power Africa.  As you know, President Barack Obama established Power Africa to help significantly increase the amount of electricity in sub-Saharan Africa.

Almost two years ago, I had the privilege of signing a previous MOU with the Nigerian government.  This agreement outlined the roles of our two governments for making Power Africa an effective program.  At the time, I knew we had an enormous task before us—a greater and more complex challenge than any of us could imagine.

The election of a new government has impacted all sectors, especially the power sector.  The new government inherited a challenging and critically important portfolio, and came under pressure immediately to show quick results at a time when capital spending has all but dried up.  Improving the performance of the distribution companies is a high priority and will be critical to achieving those results.  So, why is the United States supporting these distribution companies?  That is certainly a fair question to which I would respond, “We believe that distribution companies are the starting point for improving the entire power sector value chain.”

Today, we officially launch our assistance with the provision of management specialists assigned to the DisCos.  The specialists will focus on improving performance, enabling the distribution companies to reduce their losses and improve collections from customers.  Moreover, power generating companies will receive more of the revenue due to them, which will be reinvested for infrastructure expansion, bringing power to more people.  This assistance builds on grid modernization studies and study tours provided by our U.S. Trade and Development Agency for two of these DisCos.

More than 700 million people in sub-Saharan Africa live without access to electricity.  According to the World Bank, only 24 percent of the population has access compared to 40 percent  in other low-income countries.  Thirty-seven countries in sub-Saharan Africa have a national electrification rate below 50 percent, including Nigeria.  Countries with electrification rates less than 80 percent of the population consistently suffer from lower income per capita than countries with higher rates.  As an unfortunate result, millions of households rely on expensive, polluting, and often unsafe power sources.

President Obama set forth some ambitious objectives for Power Africa.  First, he announced the goal of increasing installed power capacity by 30,000 megawatts.  Second, he is pushing for the creation of 60 million new connections to double electricity access.  Power Africa will play a critical role in ensuring universal access to affordable, reliable, and modern energy services.  By 2030, we also hope to increase the share of renewable energy substantially, as articulated under Sustainable Development Goal 7 of the United Nation’s 2030 Agenda for Sustainable Development.

Private investors, including U.S. investors, have expressed a strong interest in moving capital into Nigeria’s power sector. These firms can add significant capacity to the grid and inspire confidence in Nigeria.

In Nigeria, over 90 percent of industrial and small businesses provide their own power.  During his speech to the National Economic Council in March, President Buhari included the power sector among the four sectors of the economy most critical in dealing with the economic challenges at both the federal and state levels.  In the next three years, he has set a target of adding 10,000 megawatts to the national grid.  This has the potential to supply over 150 million people at the current average usage per person.

I have seen how regular access to reliable and affordable electricity will spur economic growth.  We have seen this scenario many times around the world, even in my country.  I can tell you at least three ways in which electricity access can boost the economy.

First, access to electricity will increase the number and variety of jobs available.  It will lead to the creation of new markets, creating opportunities for Nigerians, which help people earn more and lift themselves out of poverty.

Third, access to electricity will also increase the time during which businesses can be open.  With regular electricity, businesses will be able to open earlier and stay open later, helping the economy thrive.

Now, allow me to speak about what this improved access to power means for everyday Nigerians because more and varied sources of power will save lives.

Electricity powers life support machines, diagnostic equipment, and newborn incubators, maintaining life for those who are sick and weak.  Refrigerated medicines like vaccines can arrive intact and at full potency for administration to those who need them.  Electricity also illuminates schools and homes, allowing children to study and prepare themselves for a healthier and more productive future.

Additionally, well-lit streets increase road safety for motorists as well as pedestrians on their way to or from home, work, or school.  All of this translates into improving healthcare, access to education, and household income.

By witnessing the signing of this MOU today, we affirm our commitment to support the development of the entire power sector.  Through improving the performance of distribution companies, we will see increased electricity supply and access.  It is our expectation that our joint efforts will improve the lives of countless Nigerians and serve as a model for other African countries.

I will close by thanking the Honorable Minister for his leadership and vision as the reforms in the energy sector begin to take place.  I am proud to represent the U.S. government here today as we partner with the Nigerian government and the distribution companies to accelerate the pace of improving supply and access to power in Nigeria.