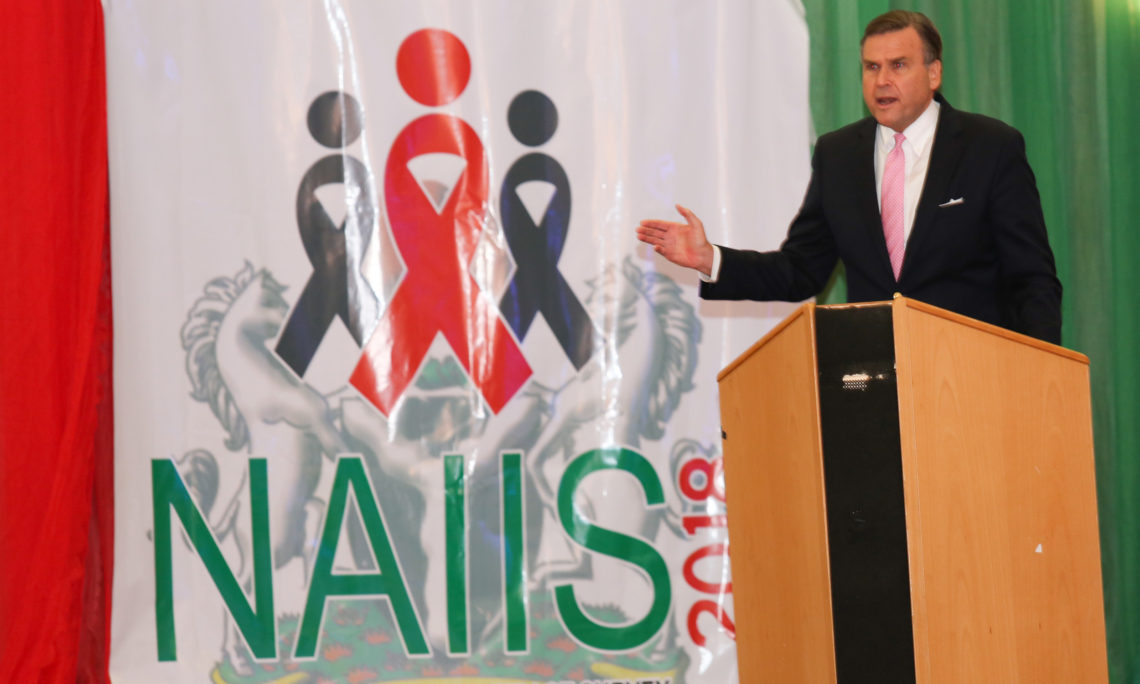 Abuja – Today, at the Presidential Villa, President Muhammadu Buhari officially launched the Nigeria HIV/AIDS Indicator and Impact Survey (NAIIS) in partnership with the U.S. government and the Global Fund.

The U.S. government is providing $71 million for the survey through the President’s Emergency Plan for AIDS Relief (PEPFAR), while the Global Fund will provide an additional $20 million. This survey will be the largest of its kind in history, planned to provide detailed data on prevalence rates of HIV, Hepatitis B, and Hepatitis C.

U.S. Ambassador W. Stuart Symington said at the launch, “This is a Nigerian survey.” He congratulated President Buhari and the Nigerian people for agreeing to conduct it now.  Ambassador Symington added, “I never think of the survey as data.  I always think of it as people.  Your peoples’ health, security, and prosperity are fundamental to the United States.”

The Ambassador said with the help of Nigeria’s Ministry of Health, the National Agency for the Control of AIDS, the Global Fund, and the U.S. Centers for Disease Control (CDC), 2,000 University of Maryland-Baltimore and University of Washington field workers will traverse the country to survey 170,000 Nigerians.

“It will be done, and Nigeria will never be the same again because every time we do something, we will know where we will make the biggest impact,” said Ambassador Symington.

President Buhari noted the HIV epidemic continues to significantly impact Nigeria’s development and the country’s progress toward the United Nations’ sustainable development goals related to health. He said, “Since 2001, the federal government and development partners have continued to expend huge resources in the fight against HIV.”  The President thanked the U.S. government for its support.

Nigeria is a priority country in the global effort to end the HIV/AIDS epidemic. The country has a generalized epidemic that cuts across all population groups and geographic areas. The U.S. government, through the PEPFAR program implemented by the CDC, the U.S. Agency for International Development and the Department of Defense Walter Reed Program has been a major contributor to Nigeria’s national HIV response.

Since its inception in Nigeria in 2004, PEPFAR has disbursed approximately $5 billion dollars in support of Nigeria’s HIV response and contributes about 64% of the total investment to combat HIV in Nigeria.