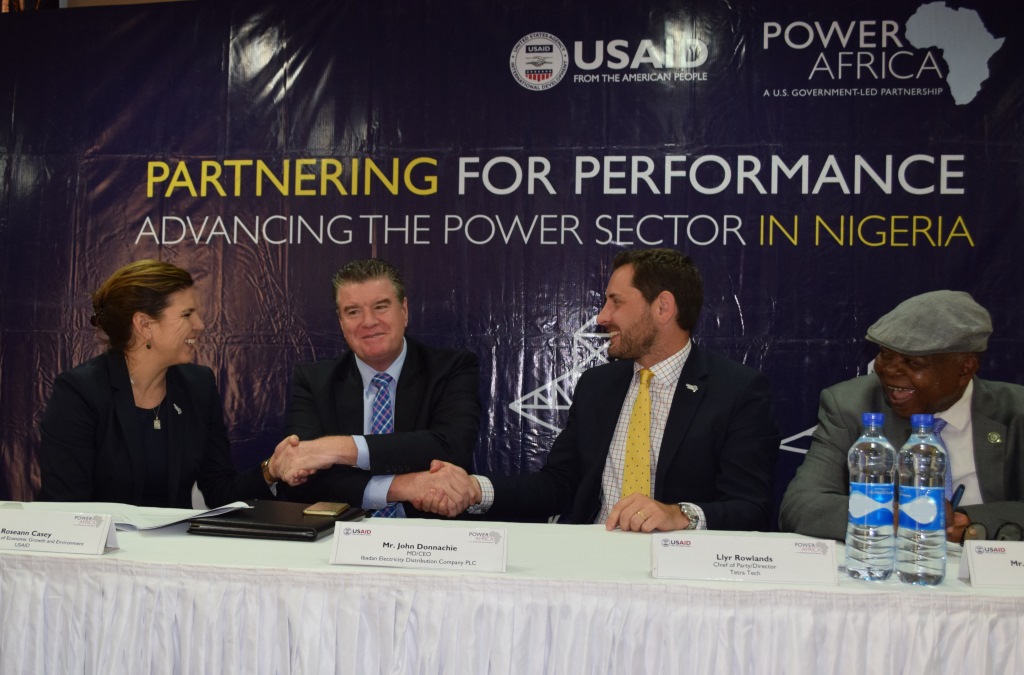 Accord promises to increase access to electricity in the Southwest

Abeokuta – On January 25, Power Africa, a U.S. government-led initiative coordinated by the U.S. Agency for International Development (USAID), which seeks to double electricity access in sub-Saharan Africa, announced a new partnership to advance the power sector in Nigeria.

Power Africa will extend technical and managerial support to the Ibadan Electricity Distribution Company (IBEDC) in its efforts to reduce energy losses, increase revenue, and improve overall performance of the utility.  IBEDC provides electricity to five states in the southwest.

Power Africa initiated similar support to three distribution companies (DISCOs) in Abuja (AEDC), Benin (BEDC), and Lagos (EKEDC) in 2016, with substantial success to date.  Aggregate energy losses have been reduced at each DISCO, and revenue collection increased by 27 billion naira ($83 million) in 2017.

Higher-performing DISCOs contribute to a more robust energy sector in Nigeria by ensuring that power generators are compensated for electricity supply, that generated power is not “lost” or “stranded” by lack of distribution and transmission capacity, and by attracting private investment in new electricity infrastructure.

“Enhancing technical and operational efficiency, reducing losses, and making it easier to collect payment will boost the bottom line at DISCOs, inject cash into the energy value chain, and attract investment for electricity expansion projects that will benefit people and businesses across the country,” Roseann Casey, the Power Africa representative for USAID/Nigeria, said at the launch.

Similar to the support to the first three DISCOs, USAID will provide technical support to IBEDC to develop and implement a turnaround plan for the distribution company. This work will include oversight of revenue management practices, field inspections to assess the extent to which new practices and procedures are being successfully implemented, and staff training to provide field-based support to utility personnel.

The partnership between Power Africa and IBEDC was formalized through a Memorandum of Understanding (MOU), which was signed during a ceremony held at the Olusegun Obasanjo Presidential Library in Abeokuta. The agreement was signed by Llyr Rowlands, Chief of Party for the Power Africa Transactions and Reforms Program and John Donnachie, Managing Director of IBEDC.

“This agreement heralds the beginning of a mutually beneficial partnership,” said   Donnachie. “We appreciate the support we have received from Power Africa, and we look forward to working together to improve operations, to building a healthier electricity value chain, and ultimately to better times for our customers.”

Power Africa’s support to the four distribution companies represents a $12 million investment in the self-reliance and resilience of Nigeria’s energy sector, and demonstrates USAID’s position as the world’s premier international development agency.