In celebration of Women’s History Month, the U.S. Consulate General has partnered with The Punch newspaper to showcase a daily note entitled This Day in Women’s History.  Similar to February’s Black History month piece, the daily note will highlight and commemorate influential female pioneers—across industry and sector—that have contributed to human progress.  The theme of this year’s national women’s history month as announced by The National Women’s History Project is Women Inspiring Innovation through imagination: celebrating women in Science, Technology, Engineering and Mathematics.  Read below to learn what significant event happened today in Women’s history.

Matronalia is the ancient festival of Juno, the birth goddess, celebrated annually by Roman matrons on March 1; on that date in 375 BCE a temple was dedicated to Juno.   According to tradition, the Matronalia symbolized not only the sacredness of marriage but also the peace that followed the first marriages between Romans and Sabine women; the Sabine people hailed from central Italy. The festival consisted of a procession of married women to the temple, where they made offerings to Juno.   At home, offerings were supplemented by prayers for marital felicity. Wives received gifts from their husbands and gave a feast for their female slaves.

Judith Hallett, Classics Professor at the University of Maryland, describes the Matronalia as a love devotional from husband to wife. On this day husbands would pray for the health of their wives and give them presents, and wives would dress up by dressing down: undoing their belts, leaving not a single knot in their robes, and loosening their braided hair, thereby encouraging Juno Lucina to loosen their wombs and bring forth their “children into the light”—a phrase attributed to Juno Lucina as the patron goddess of childbirth.

March 2: On this day in 1868 - Prominent Civic Reformist, Eleanor McMain is born! 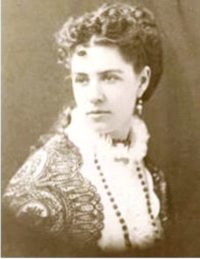 Eleanor McMain was born in Baton Rouge, Louisiana, and was influenced by her father’s strong idealism and intellectual curiosity at a young age.  She attended the Episcopal Church and private girls’ schools in Baton Rouge and in 1886 served as a governess and teacher and then opened her own private school. She moved with her mother in the mid-1890s to New Orleans.  After a preparatory summer in Chicago during which she took courses at the University of Chicago and studied settlement movement at first hand at Graham Taylor’s Chicago Commons and Jane Addams’ Hull House, Eleanor McMain plunged into what was the be a thirty-year career of social service.

All phases of New Orleans civic life keenly interested Eleanor McMain. In 1905 she founded and became the first president of a woman’s league, representing various New Orleans women’s groups, to work for reform on many fronts.  One legislative success came in 1910 when the passage of a League-sponsored compulsory education law was passed.  She remained committed to civic justice and served as president of the Tenement House Association where she publicized the findings of the association’s 1904 housing survey, which drew public attention to the deplorable urban living conditions in the Tenements. She became director in 1904 of Jean Margaret Gordon’s Milne Home for Girls and lent her active and influential support to Miss Gordon’s campaigns of 1906 and 1907 to amend the state’s laws governing the labor of women and children.

Though essentially a local figure, Miss McMain consciously attempted to connect her work with national and international movements. Despite her many duties Eleanor McMain never became just an administrator, but always retained a warm capacity for friendship and civic responsibility.

On Monday, March 3, 1913, clad in a white cape astride a white horse, lawyer Inez Milholland led the great woman suffrage parade down Pennsylvania Avenue in the nation’s capital.   Behind her stretched a long line with nine bands, four mounted brigades, three heralds, about twenty-four floats, and more than 5,000 marchers.

Women from countries that had enfranchised women held the place of honor in the first section of the procession. Then came the “Pioneers” who had been struggling for so many decades to secure women’s right to vote. The next sections celebrated working women, who were grouped by occupation and wearing appropriate garb—nurses in uniform, women farmers, homemakers, women doctors and pharmacists, actresses, librarians, college women in academic gowns. Harriet Hifton of the Library of Congress Copyright Division led the librarians’ contingent. The state delegations followed, and finally the separate section for male supporters of women’s suffrage. All had come from around the country to “march in a spirit of protest against the present political organization of society, from which women are excluded.”

Any doubts about the courage, dedication or organizational skills of suffragists was quelled along Pennsylvania Ave. in Washington, D.C. and the National American Woman Suffrage Association and the event’s chief organizers, Alice Paul and Lucy Burns, successfully executed the march, despite every imaginable obstacle, they proved that the late Susan B. Anthony was right when she predicted that “failure is impossible” for woman suffrage.

March 4: On this day in 1918—Prominent Suffragists are Released from Prison, Charges Dropped! 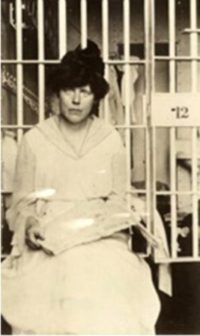 Alice Paul and 217 other women were freed after being arrested in 1917 for picketing the White House. The Court of Appeals of the District of Columbia declared their arrests illegal, and voided all convictions handed down by the local police court.

The picketing began on January 10, 1917, the day after a delegation of 300 suffragists met with President Wilson. Disappointed that the president was unwilling to either officially endorse or help their cause despite professing personal support, the suffragists proceeded to posting pickets outside the White House gates. Choosing not to speak, they made their message clear through large banners emblazoned with questions such as “Mr. President, What Will You Do For Woman Suffrage?” and “Mr. President, How Long Must Women Wait For Liberty?”

During this time, even though the war effort was going on, Paul stood her ground and fought for the rights of women and used the war effort as an advantage for her fellow suffragettes and herself. They questioned why they should support the country when the nation fails to allow basic civil liberties granted by the constitution—voting rights. The suffragettes that stood behind Paul were unrelenting until finally securing suffrage rights on June 4, 1919 under the 19th Amendment.

The Prison Special was a railroad campaign chartered by the National Woman’s Party to allow formerly imprisoned suffragists an opportunity to share their stories with huge crowds and reporters around the country. Activists used the platform to detail their prison ordeals and explain why they have had to resort to ever more militant–though non-violent–tactics, such as burning the President’s speeches in large ceremonial urns in front of the White House.

The goal of the radical activism was to secure Congressional action on the stalled suffrage amendment, which failed by a single vote in the Senate on February 10; it was widely believed that the president did not pressure members of his party to vote, allowing the bill to fail.

The tour became a popular organized spectacle after its first stop in Charleston, South Carolina, where it generated the biggest mass meeting in the city’s history at the time. On this night in 1919, prominent suffragist Lucy Burns recounted her experience of being force-fed in jail; a tactic employed by guards to forcibly quell hunger-strikes. 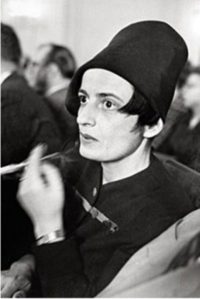 In the words of Scott McLemee, “Ayn Rand was the single most important novelist and philosopher of the 20th century. Or so she admitted with all due modesty, whenever the subject came up.” Ayn Rand fans range from Hillary Clinton to Alan Greenspan.

Ayn Rand wrote several plays in the 1930s. In 1936, Ayn Rand published her first novel, We, the Living, followed in 1938 by Anthem and, in 1943, The Fountainhead. The latter became a best-seller and was turned into a King Vidor film starring Gary Cooper.

Atlas Shrugged, 1957, also became a best-seller. Atlas Shrugged and The Fountainhead continue to inspire and motivate philosophical exploration of “objectivism” – Ayn Rand’s philosophy, sometimes called egotism. “Rational self-interest” is the core of the philosophy. Ayn Rand resisted justifying self-interest as grounded in the “common good.” Self-interest is, in her philosophy, rather the source of achievement. She scorned illusions of a common good or self-sacrifice as motivators.

Ayn Rand published books and articles promoting the positive value of selfishness and capitalism, and critiquing old and new left, continuing until her death in 1982. At the time of her death, Ayn Rand was adapting Atlas Shrugged for a television mini-series.

March 7: On this day in 1938 - First Woman NASCAR Driver, Janet Guthrie is Born! 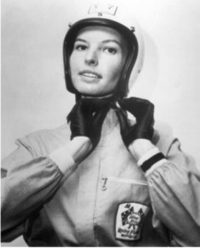 Janet Guthrie is a retired professional race car driver and the first woman to qualify and compete in both the Indianapolis 500 and the Daytona 500.

Guthrie was originally an aerospace engineer and after graduating from the University of Michigan, she worked with Republic Aviation. She began racing in 1963 on the SCCA circuit in a Jaguar XK 140 and by 1972, she was racing on a full-time basis.

In the 1976 World 600, Guthrie finished 15th, becoming the first woman to compete in a NASCAR Winston Cup superspeedway race. Guthrie would go on to compete in four more races that season. The following season, she competed in her first Daytona 500, finishing 12th when her car’s engine blew two cylinders with ten laps to go. For the race, though, she still earned the honor of Top Rookie. Overall, Guthrie went on to compete in 33 races in NASCAR over four seasons. Her highest finish, sixth place at Bristol in 1977, is the best finish by a woman in a top-tier NASCAR race.