The purpose of government is to protect and serve the people being governed, to insure that they enjoy the basic rights and freedoms needed to live useful, fulfilled lives. Elections are the means by which people select the government that best delivers on those served. In his State of the Union address in 2011, President Obama reminded the nation that those elected to govern must stand ready to respond to the challenges ahead. “That’s what the people who sent us here expect of us. With their votes, they’ve determined that governing will now be a shared responsibility between parties. We may have differences in policy, but we all believe in the rights enshrined in our Constitution. We may have different opinions, but we believe in the same promise that says this is a place where you can make it if you try. We may have different backgrounds, but we believe in the same dream that says this is a country where anything is possible. No matter who you are.  No matter where you come from…. We should give them a government that’s more competent and more efficient.”

And from a historical perspective, Franklin Delano Roosevelt emphasized four freedoms in his State of the Union address in 1941. 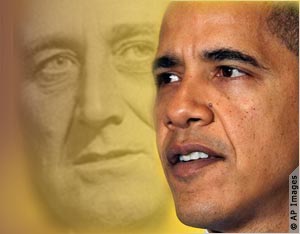 The Four Freedoms were goals articulated by U.S. President Franklin D. Roosevelt on January 6, 1941. In an address known as the Four Freedoms speech (technically the 1941 State of the Union address), he proposed four fundamental freedoms that people “everywhere in the world” ought to enjoy:

President Roosevelt’s Four Freedoms speech inspired a set of “Four Freedoms” paintings by Norman Rockwell. The four paintings were published in The Saturday Evening Post on February 20, February 27, March 6 and March 13 in 1943.  Each painting was accompanied in the magazine by a matching essay on the freedom captured in the painting. See the paintings at http://www.curtispublishing.com/other-artists/html/rockwell_freedoms.shtml