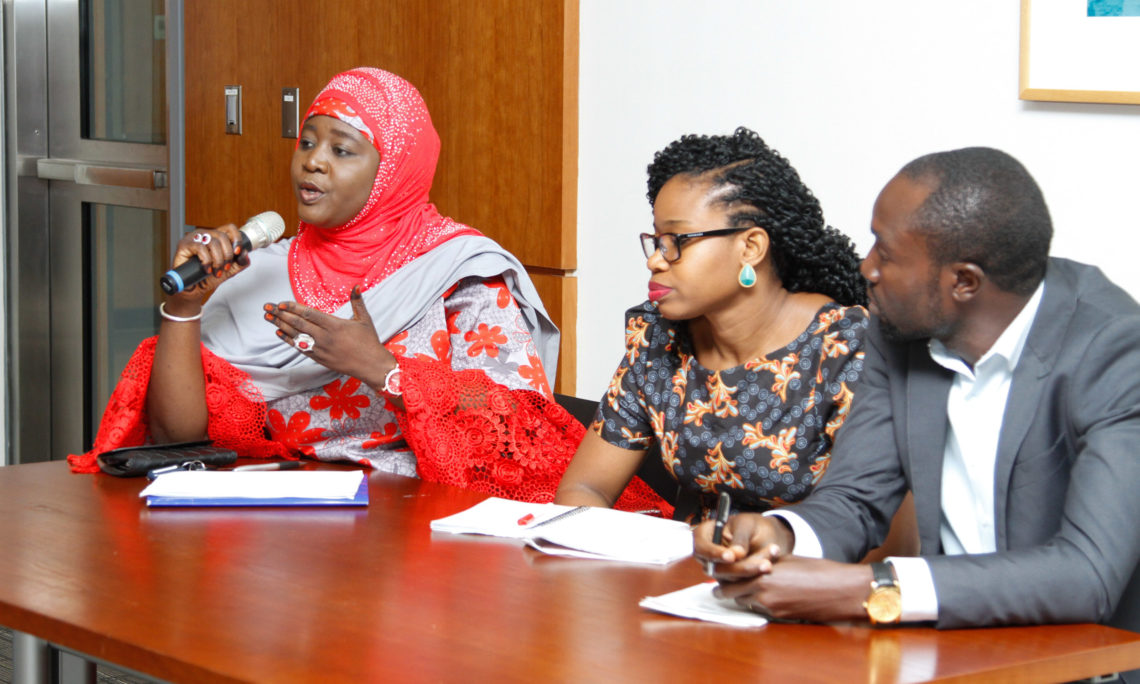 Several Nigerian observers of the U.S. Presidential election shared their experiences during a program hosted by the U.S. Embassy in Abuja. They included Zainab Audu Bako, a politician, Cynthia Mbamalu and Fatu Ogwuche from civil society, and Abdullateef Salau, a journalist. Zainab participated in the International Visitor Leadership Program (IVLP) for women politicians drawn from the North, South West and South East, representing political parties such as PDP, APC and the Kowa Party. Cynthia and Fatu participated in the Presidential Election Study Team while Abdullateef’s reporting tour was run by the U.S. State Department’s Foreign Press Centers.

In his opening remarks Country Public Affairs Officer Aruna Amirthanayagam said the election showed the strength of American institutions and how the country always comes out stronger after such a transition.

Making her presentation Zainab Audu Bako noted the serenity and maturity of campaigning and that placards were placed outside properties with the permission of the owners. She commended the get-out-to-vote efforts where voters were encouraged to come out and vote via phone calls and door to door campaigning. The electronic voting system was also fascinating to her, especially the speed and orderliness with which votes were cast.

Abdullateef Salau of the Daily Trust also shared Zainab’s observations of the electronic voting machines. He noted in his presentation that the machine counts and collates the votes right there, leaving no room for subsequent alteration of the results. He also noted that Election Day is not a public holiday as people went about their normal business. One thing he discovered was that the U.S. operates a highly decentralized political system with each of the 50 states responsible for the conduct of elections.   Thus Florida has early voting and voting by mail in addition to election day voting, but New York only has Election Day and absentee voting (which allows registered voters to vote if they are absent from the city on Election Day.)

Two things that stood out for Cynthia Mbamalu were campaign finance and the attention given to persons with disabilities and minority groups. She noted that the campaign law regulated by the Federal Elections Commission provides that for all donations and all campaign spending must be disclosed so it can be tracked.   She noted the attention given to disability and minority groups to ensure both access and that language would not be an obstacle to full participation. She was disappointed however that some states did not allow for international election observers since the U.S. regularly sends election observers to Nigeria.

Fatu Ogwuche interest was in the use of technology in the election. She observed that technology was used to facilitate the inclusion of minority groups, persons with disabilities and even the sick.

A major concern of the discussants and the audience was the Electoral College and Information Officer Russell Brooks explained that this feature of the U.S. system was created by the nation’s founders to promote fairness among the states and ensure that those with large populations do not dominate the Presidential process.