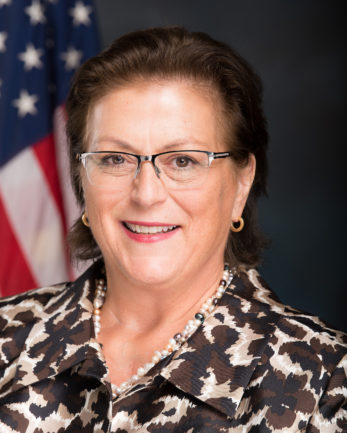 Claire Pierangelo, a Minister Counselor in the Senior Foreign Service, assumed her duties as Principal Officer of the U.S. Consulate General in Lagos, Nigeria in August 2019. She most recently served as the Acting Deputy Commandant of the National War College at the National Defense University, where she was the Senior State Department representative and an Assistant Professor of National Security Studies. She previously served in a variety of senior leadership positions at the Department of State, including Director for Performance Evaluation for the U.S. Foreign Service, where she was responsible for implementing broad reforms to the evaluation and promotion systems and as Deputy Chief of Mission and Charge d’Affaires at the U.S. Mission to Vietnam. Other overseas assignments include Principal Officer in Surabaya, Indonesia; Economic Counselor in Vietnam where she helped negotiate the U.S. economic opening and WTO accession, Economic Officer in Rome, and Consular officer in London.  In Washington, she has served as Office Director for Central Europe; Deputy Director for European Regional Affairs; Director of Bilateral Investment at the Office of the U.S. Trade Representative; Italy, OECD/EU, and Japan Trade desk officer. She has also served as Foreign Policy advisor to the Chevron Overseas Petroleum Company on global energy issues. Ms. Pierangelo received her B.A. in European History from the University of California at Santa Cruz, her M.A. in International Studies and Economics from the Johns Hopkins School of Advanced International Studies (SAIS), her M.S. in National Resource Strategy from the Industrial College of the Armed Forces and her M.S. in National Security Studies from the National War College. She speaks Italian, French, Vietnamese, Indonesian and some Spanish and Haitian Creole.