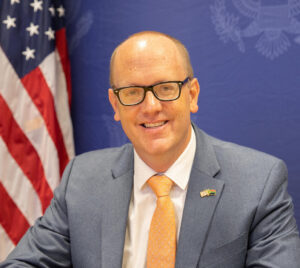 Will Stevens is the Consul General at the U.S. Consulate General in Lagos, Nigeria.  Prior to arriving in Nigeria, Mr. Stevens served as the Acting Consul General in Cape Town South Africa, where he directed U.S. government engagement in South Africa’s three cape provinces, expanding trade and investment by 50% over two years and overseeing the U.S. government’s response to COVID-19 in the Cape.  In 2014, he received the Edward R. Murrow Award for Excellence in Public Diplomacy, the State Department’s highest award for public diplomacy work, for his work leading the U.S. Government’s Interagency Task Force on countering Russian propaganda during the Ukraine crisis.

Mr. Stevens is an experienced Foreign Service Officer with overseas experience in South Africa, Russia, Turkmenistan, Israel, and Belarus, as well as experience in Washington at the Foreign Service Institute, the Bureau of Education and Cultural Affairs and the Bureau of African Affairs.   In the Bureau of African Affairs, Mr. Stevens was a Senior Advisor on countering violent extremism and also served as the Bureau Spokesperson, where he directed the public affairs planning and messaging for the 2014 U.S.-Africa Heads of State Summit, which brought together 50 African leaders in Washington for the first time.  Mr. Stevens was the Director of the Foreign Service Institute’s Public Diplomacy (PD) Training Division from 2017-2019, where he oversaw the training of the State Department’s entire public affairs and public diplomacy corps.  Mr. Stevens was the Spokesperson for the U.S. Embassy in Moscow from 2014-2016, where his team’s work was recognized in the Public Diplomacy Council’s annual “Ten Best” for the “Best Use of Social Media by an Embassy.”  He has also served as Chief of Staff at the Bureau of Educational and Cultural Affairs, chief of public affairs at the U.S. Embassy in Turkmenistan, and in the press and cultural affairs offices at the U.S. Embassy in Tel Aviv.

A native of Great Falls, Virginia and a graduate of Brigham Young University, Mr. Stevens is married with five children.  He is an avid football fan, basketball player and bodyboarder.