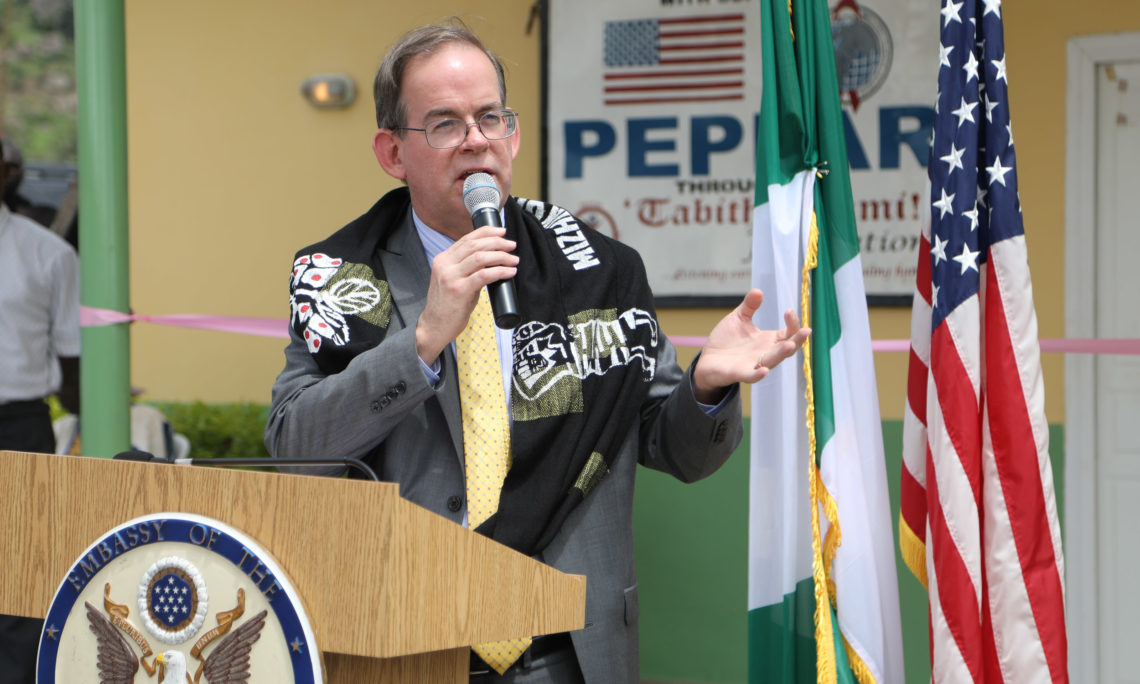 It is my pleasure to participate in this commissioning ceremony as health is one of the priority areas of U.S. development assistance in Nigeria.

The U.S. – Nigeria partnership on HIV/AIDS began in 2004 through the U.S. President’s Emergency Plan for AIDS Relief — known as PEPFAR. From 2004 to 2016, United States support for HIV prevention, care and treatment programs in Nigeria totaled more than 4.3 billion U.S. dollars in support of the Nigeria HIV/AIDS response.

More than 700,000 Nigerian men, women and children are currently on HIV treatment this this support. In Financial Year 2016 alone:

More than 7 million pregnant women received HIV testing and counseling toward prevention of mother-to-child transmission of HIV; and

Notably, today’s event highlights the importance of preventing HIV infection in children through safe maternal and child health practices for women and children, including children orphaned or made vulnerable by AIDS. Safe maternal health care practices, including antenatal, delivery, and post-natal care services can help to prevent mother-to-child transmission of HIV.

It should be noted that this clinic was initiated and partially constructed by Jikoko community, but the project was stalled for lack of funds. The project was completed with grant assistance from the U.S. Ambassador’s Small Grants Program for Children Orphaned by AIDS and other Vulnerable Children.

Jikoko Community with the assistance of the Tabitha Cumi Foundation was one of the forty-six recipients of grants under the Ambassador’s Small Grants Program in September 2014. The grant of approximately USD$10,000 was provided to the community for construction of the clinic and to pay for clinic furniture and equipment.

The clinic plays a significant role in the field of emergency intervention during labor to reduce the incidence of maternal deaths and the resulting incidence of vulnerable children and orphans in the community. Services focus on ante-natal care, health care for children, immunizations, and programs on child nutrition.

The PEPFAR Small Grants Program focuses on community-driven initiatives that involve significant local contributions in land, labor, capital and expertise and favors projects that will be sustained by the community in the long run. It is a special initiative aimed at helping communities to help themselves.

The goal is to provide antenatal care and delivery services to women in Jikoko and surrounding communities to reduce maternal deaths and the resultant number of orphans and vulnerable children.

Reports show that the clinic has recorded 60 live births with no incidence of maternal or child mortality and 100 child vaccinations since its commencement in 2015. This is a clear turnaround for a community that had lost pregnant women (including two women from the same family) to childbirth due to the distance of the community to the nearest health care facility.

We are particularly excited to be commissioning this primary health clinic at this time as the Bwari LGA flags off its polio campaign.

The U.S. Government through the U.S. Centers for Disease Control and Prevention (CDC) contributes over $23 million annually to immunization activities in Nigeria, including polio eradication, routine immunization and improvement of primary health care programs, which improve immunization coverage.

Through the United States Agency for International Development (USAID), the U.S. Government makes annual contributions of $35 million to the Nigeria polio program. In addition to these annual contributions, the polio program also received an additional $7 million at the national level in 2016 and provided technical assistance in Bauchi, Katsina and Sokoto States. USAID also supports procurement of vaccines and health systems strengthening through the GAVI alliance.

The U.S. Government is appreciative of our work with the National Primary Health Development Agency (NPHCDA), the UN agencies, state governments, as well as the National Stop Transmission of Polio (NSTOP) program and the GAVI alliance (some of our main implementing partners). We urge them to strengthen this work to kick polio out of Nigeria forever.

Nigeria is the only country in Africa that is still on the endemic list for polio. Health care workers are, therefore, encouraged to continue to make the provision and demand for immunization a priority.

I am confident that this clinic will contribute toward the goal to kick out polio by providing immunization services, including polio vaccines, even as the clinic contributes to reducing morbidity and mortality among children.

I would like to take this opportunity to express my sincere appreciation to Tabitha Cumi Foundation for providing leadership to the community to complete this health clinic project.

I sincerely hope that the clinic building and equipment will be utilized and maintained most effectively and will contribute to the improvement of health and social wellbeing of the people of Jikoko community.

Thank you for your attention.