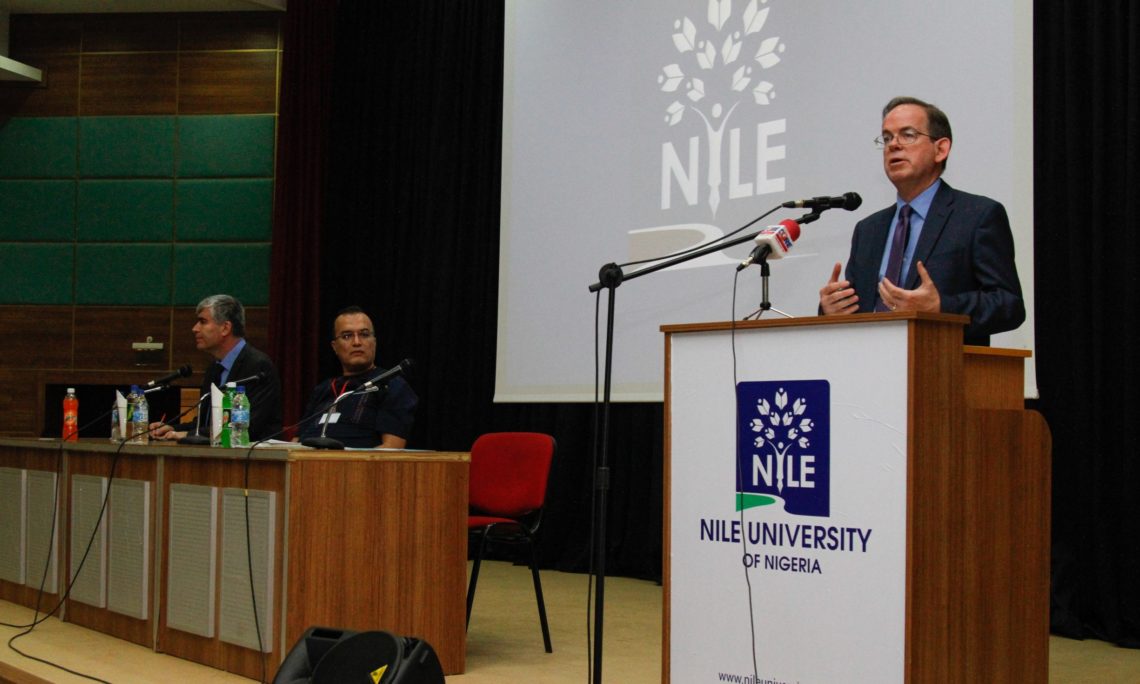 As Prepared for Delivery

Deputy Vice Chancellors Gursoy and Adeshina, members of the administration and faculty of Nile University, students, and friends, thank you for your warm welcome.  This is my first visit to your institution, and from your beginnings back in 1998 with 23 students to the near 200 that now fill this hall and the thousands in classrooms beyond, your success is evident.  I’m thankful for the important educational role you play here in the capital city of Abuja.

Not too far from my capital city, Washington, D.C., is Charlottesville, Virginia.  Nearby, if you ever have the chance to travel to this beautiful part of the country, is the home of one of the giants of American history, Thomas Jefferson.  His house, Monticello, enjoys sweeping views of the countryside looking west toward the Appalachian Mountains which so inspired the imagination of the third President of the United States.  He’s buried on the property.  And before his death, Jefferson left explicit instructions regarding the inscription which would be applied to his gravestone:

Author of the Declaration of American Independence, of the Statute of Virginia for Religious Freedom & Father of the University of Virginia.

In his instructions, he clearly indicated, “Not a word more” should be applied, “because by these, I wish most to be remembered.”

This week we remember Jefferson and his important role in establishing religious freedom as a fundamental American right.  Specifically, we remember the second of those three accomplishments inscribed on his tombstone.  It was on January 16, 1786, that the Virginia General Assembly adopted Jefferson’s Virginia Statute for Religious Freedom.  This document set the precedent for the first amendment to the U.S. Constitution, which would follow a few years later.  The U.S. Constitution, which every U.S. government official, including myself, is sworn to uphold, proclaims that “Congress shall make no law respecting an establishment of religion, or prohibiting the free exercise thereof.”

Religious freedom is central to American identity and values.  Much has changed in the United States since Jefferson’s era. A time in which, according to Virginia colonial law, persons brought up Christian who denied the existence of God were barred from holding public office or even possibly threatened with imprisonment.  Such U.S. laws no longer exist.  However, religious freedom, and the interfaith harmony and tolerance that go hand-in-hand with it, are no less central to the peace, security, and prosperity of our society.

Unfortunately, in too many countries around the world, the ability of individuals to live in accordance with their consciences is under attack.  Centralized regimes and non-state actors use violence and coercion in an attempt to prevent persons from pursuing their freedom of religion or beliefs.  Research has shown that when countries fail to respect human rights – including religious freedom – and target specific groups, or when they allege to combat violent extremism by constraining peaceful religious practice, these countries become more prone to the radicalization of individuals to violence and the emergence of violent extremist organizations.

Consequently, the United States Government places great importance on protecting religious freedom and promoting interfaith tolerance and understanding.  We have seen how countries respecting freedom of religion or belief are more stable, more productive, and respectful of other rights.  But, we have also seen how the law can be used to harass, intimidate, and persecute religious groups.  The United States will continue to call for the repeal of laws that are inconsistent with international human rights law.

Our constitutions – Nigerian and American – are united on this principle.  Together we support individuals’ freedom to choose, practice, propagate, or change their religion.  However, practicing that constitutional freedom must be a daily and deliberate exercise.  There is no room for violence, or the threat of it, destruction of property, or discrimination in a free society.  And when those violations do occur, they require timely legal action to punish the perpetrators for the crimes committed.

We at the U.S. Embassy and the U.S. Government as a whole are committed to partnering with Nigeria to uphold religious freedom.  One of the central topics in our conversations – including that between President Buhari and President Obama – has been our support for a holistic effort by the government of Nigeria to counter Boko Haram – a terrorist group which destroys the lives of both Muslims and Christians.

Additionally, across Nigeria, we support programs that help build interfaith networks that promote religious tolerance.  That work includes bringing together Muslim and Christian youth on a football pitch in the spirit of teamwork and fair play.  It means gathering religious leaders from across denominations to speak out and take action against corruption which fuels violent extremism.  It is about engaging community leaders to set an example of tolerance, openness, and support.

When Secretary Kerry visited Sokoto last August, he recounted a story of the meeting between then President Nnamde Azikiwe with Ahmadu Bello shortly after Nigeria’s independence.  They were discussing ways to overcome the ethnic and religious divisions of the new independent country.  And as the story goes, President Azikiwe said, “Let us now forget our differences,” to which Bello responded, “No, let us understand our differences.”

Our commitment to understanding must overcome fear.  As President Obama said last week, understanding must overcome “fear of change, the fear of people who look or speak or pray differently.”  Yes, at times, it can be difficult.  These issues go to the heart of who we are and what we believe.  But I’ve found that living in diverse, open communities can often lead to a deepening of one’s own faith and a commitment to exercising that faith in harmony with others.

Thank you for allowing me to commemorate National Religious Freedom Day with you this week.  America proudly stands with the people of every nation who seek to think, believe, and practice their faiths as they choose.  I go back to Thomas Jefferson, who is credited with celebrating the first Iftar dinner in the White House when he hosted an envoy from modern day Tunisia back in 1805.  Upon learning of his guest’s religious practice and fasting, Jefferson arranged for the meal usually taken at 3:30p.m. to be moved to sundown.  My hope is that all our homes, places of work, houses of worship, and centers of learning exemplify the same spirit of inclusion as Jefferson demonstrated that evening so many years ago.  Thank you.