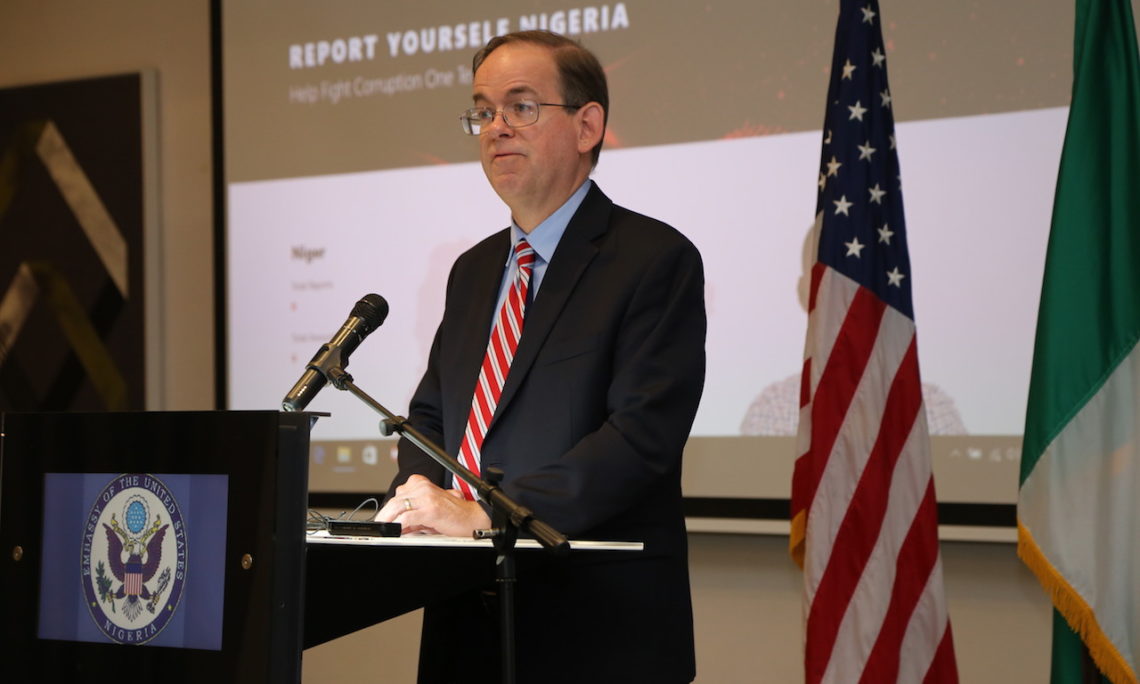 Distinguished guests, I want to thank you once again for participating in this outstanding initiative to address corruption in Nigeria.  Nigeria is the single most important strategic partner for the United States in Africa and in order to successfully further our shared goals, the U.S. Mission in Nigeria has made combating corruption a central priority.  Throughout the country we hear reports of alleged corruption, from the $42 million found in the apartment in Ikoyi to the $6 billion fuel subsidy scam, but conceptualizing the impact from millions and billions is almost impossible.

However, the cost of corruption should not only be measured in billions in currency, but in the daily cost to hardworking Nigerian citizens.  We have all heard stories of the cost of corruption.  A taxi driver – let’s say his name is Olufemi – has three kids.  He has been saving every kobo he could for his oldest child, Tosin, to go to college.  His driver’s license has expired, so he went to get it renewed but could not pay more than the 6,750 naira it was supposed to cost.  Because he couldn’t “dash” the agent, he had to wait in line for many days.  He decided that he couldn’t wait anymore because he was losing wages by not driving the taxi, so he risked driving with an expired license.  He was stopped by the police at a checkpoint a few days later.  The fine for a driver’s license violation is 10,000 naira.  Olufemi wasn’t able to pay that either, so he was taken to jail.  Olufemi and his family finally paid 125,000 naira for him to be released on “bail” using everything he was saving for Tosin’s college fees.   He now owes his family members and neighbors 65,000 naira and he lost his taxi because he was unable to work for so long.  Tosin has left school to sell bread and Olufemi is still looking for work.

If Olufemi, who was only looking to do what was right for his family, was able to pay the flat rate for his driver’s license without any additional dash or illegal expedite fee, he would have been able to send Tosin to college and he would still be able to support his family through his honest work as a taxi driver.  Now not only has Olufemi suffered, but his suffering is passed on to Tosin, whose hopes and dreams have been crushed. This is the true cost of corruption.

This is why as we measure corruption, we should not only measure it in millions and billions, but in the daily  pain it causes hardworking Nigerian citizens.  All Nigerians have experienced it, this “small, small” corruption that has become a way of life.  But is it this constant “dash” here or “Happy Friday” there that adds up and sometimes results in someone not having enough to pay the bus fare to get to work.  It is the everyday bribe that forces people to decide between having enough to eat and powering the generator so their children can study at night.

So when we talk about corruption in Nigeria, it is not only about the millions taken by the grass cutters and the money choppers, it is about the impact corruption has on the mama selling beans on the corner or the young hawker just trying to fill his belly.  And that is what this innovative web platform seeks to address – the everyday cost of corruption faced by millions nationwide.

“Report Yourself,” will offer Nigerians the chance to instantaneously report corruption, bribery, and graft with the option of even filing an official compliant with the Nigerian Police Force Public Complaints Rapid Response Unit (PCRRU) about a specific police officer.  The Nigerian Police Force is an able and supportive partner in this fight to root out corrupt officials and change the culture of service delivery in Nigeria.

The Presidency has made the fight against corruption a key focus and now is the time to make significant strides in this fight. The U.S. Government strongly encourages the rollout of the Open Government Partnership  National Action Plan.  And through the State Department’s Bureau of International Narcotics and Law Enforcement, we are working to increase the capacity of Nigerian law enforcement agencies and the justice sector. The United States also remains committed to assisting Nigeria to recover public assets stolen by corrupt officials.

However, today we are focused on a partnership led by Nigerians, developed by Nigerians, and fueled by Nigerians that puts the power to report corruption in the palm of your hand.  This corruption fighting tool has the potential to reach millions of people because it has the support of the people in this room.  I hope that “Report Yourself” starts a new movement in citizen engagement and I hope every Nigerian who is affected by corruption will feel empowered to share their experiences.  The tide will turn against the culture of corruption  when Nigerians recognize that they must fight as one to stamp out this scourge that has hampered development and stifled prosperity.