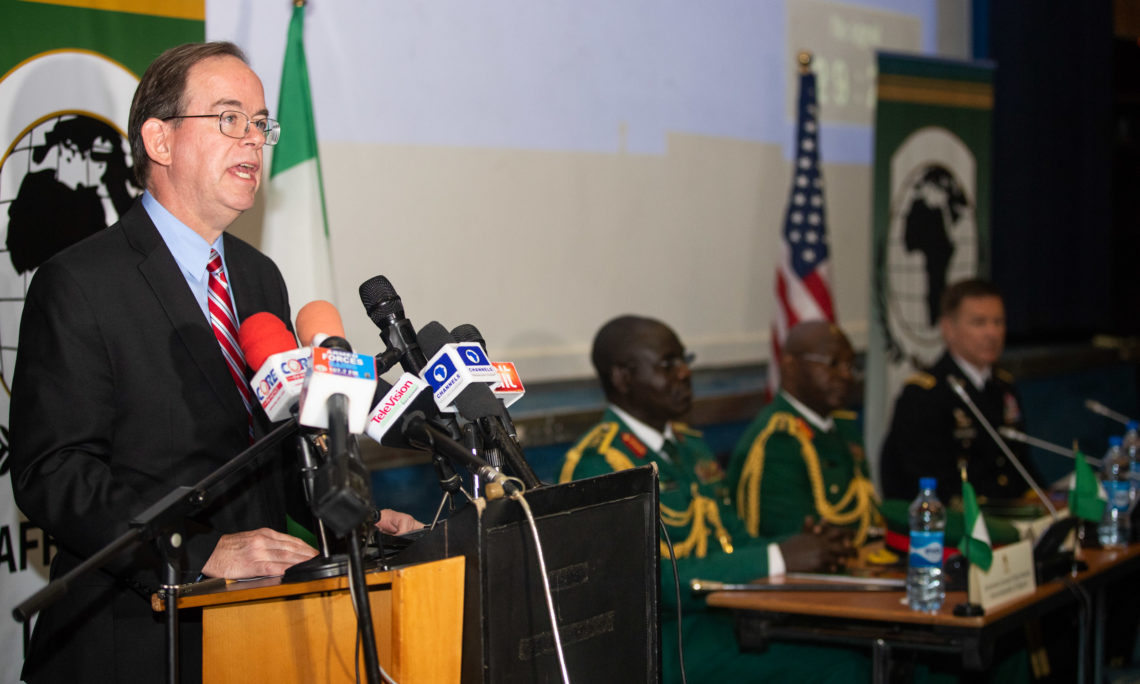 Early in my diplomatic career, I served in Vietnam, a nation in which we, the United States, obviously have a long and complicated military history.  During my tour in Hanoi, I learned about the story of Captain Roger Donlon – the first person to win the Medal of Honor for his actions in that conflict. CPT Donlon was the commanding officer of a small Special Forces team near Nam Dong.  Just before dawn on July 6, 1964, a battalion of Viet Cong forces attacked the camp with mortars, grenades and heavy gunfire. Over the next five hours, CPT Donlon was wounded four times – in the stomach, in the leg, in the shoulder, and in the face. Undeterred, he continued to fight. He spent the attack moving from man to man, post to post, inspiring his troops, checking on their welfare, and caring for the wounded. CPT Donlon’s story is one of individual heroism, certainly – but it is more than that. It is about the power of leadership, collective bravery and teamwork. Although his unit was outmanned and outgunned, they worked together to hold their ground and successfully defend their camp.

The story of CPT Donlon and his team exemplifies the theme of this year’s African Land Forces Summit – “Unity is Strength.”   Together we can achieve what alone we cannot – a fact that is all too familiar to the leaders in this room. We face complex, ever evolving threats across the continent, from the rise of terrorist networks to the growing problems created by climate change.  Recognizing that no single country can address these challenges alone, alliances and partnerships have emerged – from the six AMISOM nations fighting alongside Somali units to defeat Al-Shabaab to the combined efforts of Senegal, Nigeria, Ghana, Mali and Togo to ensure a peaceful handover of power in The Gambia last year.  It is our hope that through events, such as this summit, we can forge connections today that will allow for continued such shared efforts in the future.

On a national level, the theme is equally applicable. Unified nations are inherently stronger nations.  In fact, this motto of “Unity is Strength” brings to mind the fundamental principle that is enshrined in America’s traditional motto – “E pluribus unum.”  Out of many, one.   In order for us to be our strongest, we have to come together out of our diversity to make a more unified whole.  Like in the United States, many nations in Africa are diverse countries, with many cultures and languages and histories.  These differences are sources of local and ethnic pride, as they should be.  But we all need to work to bring us together across these differences. If we do so, we will be stronger for it.  Because diversity is not something that needs to divide us.  Diversity committed to unity makes us stronger.  We have seen that in the United States at key times in our history, and it is true for other nations as well.

At its best, the military can play a critical role in building this cohesion. After all, it is one of the few institutions that brings together people from across the nation, from every race, religion and class.  Where, in our army, a first generation, Dominican-American might serve alongside a descendent of someone who fought in our War of Independence – or in Nigeria, where an Igbo from Ogoni might stand shoulder to shoulder with a Fulani from Bauchi. At the end of the day, their individual background is of little importance. Instead, all that matters – to paraphrase the U.S. Army’s Soldier’s Creed –is that they are “warriors.”

With such power, however, comes great responsibility.  As we have all seen, a military can, at its best, unite a nation – and, at its worst, tear it apart.  In his famous funeral oration Pericles – the ancient Greek statesman and general – honors the fallen soldiers by underscoring the value of the government they sought to defend.  He dwells upon the greatness of Athens’ democracy, because – and I quote – “I want to show you that we are contending for a higher prize than those who enjoy none of these privileges, and to establish by manifest proof the merit of these men whom I am now commemorating. …  For in magnifying the city I have magnified them, and men like them whose virtues made her glorious.”   Pericles’ words continue to ring true today.  The strength and justice of our nations magnifies the sacrifice and virtue of those, like you, who serve to protect them.

I wish you all a fruitful and successful summit.