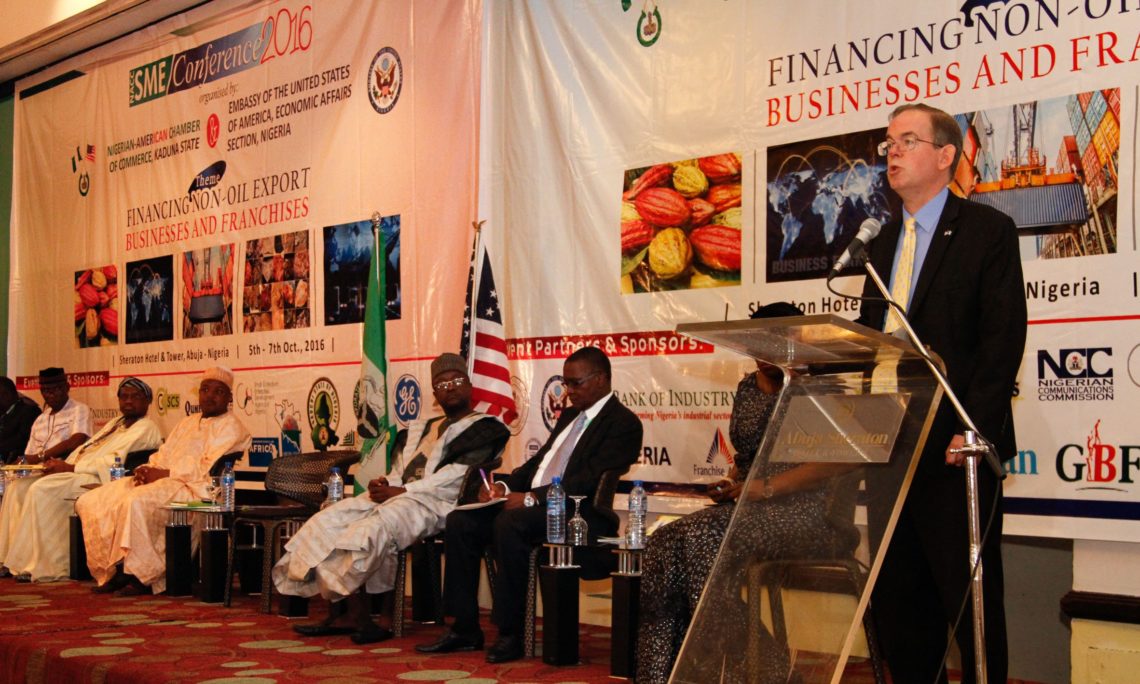 Abuja, Nigeria – Speaking yesterday at a Nigerian-American Chamber Of Commerce Conference on SME Financing and Franchising,  U.S. Chargé d’Affaires David Young said United States has provided more than half a billion dollars in annual assistance to Nigeria in the areas of health and security, but is also increasingly focused on the issues of economic stability and growth for the country.

“We recognize that our shared health and security goals depend on a prosperous economy”, he stated.

Mr. Young recalled that at the U.S. Africa Business Forum two weeks ago in New York, President Obama said –:  “Wherever I’ve gone, from Senegal to South Africa, Africans insist they don’t just want aid, they want trade. They want partners, not patrons. They want to do business, and grow business . . . and the United States is determined to be that partner, for the long term.”

He also recalled former Ambassador James Entwistle’s frequent reminders to Nigeria that the relationship between the two countries is indeed a partnership, one in which the United States does not do things for Nigeria, but with Nigeria.

Young highlighted the United States’ support for Africa’s economic prosperity under President Obama, including renewal by Congress of the Africa Growth and Opportunity Act (AGOA) for a decade.  Other important steps taken by the United States: launching  Trade Africa and Power Africa, creating the Doing Business in Africa campaign, and increasing commitments from the U.S. Export-Import Bank, Overseas Private Investment Corporation (OPIC) and the Millennium Challenge Corporation (MCC).

The 2016 Nigerian-American SME Financial and Franchising Conference is a bilateral trade and investment advancement initiative organized in collaboration with the Economic Section of the United States Embassy in Nigeria.