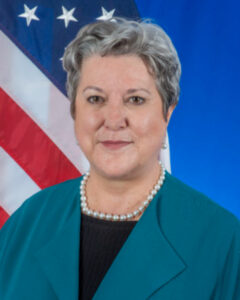 Ambassador Leonard is a career member of the Senior Foreign Service, class of Minister-Counselor. From 2016-2019, Ambassador Leonard was the Representative of the United States of America to the African Union, with the rank and status of Ambassador Extraordinary and Plenipotentiary, serving concurrently as U.S. Permanent Representative to the UN Economic Commission for Africa (UNECA).  She was previously the U.S. Ambassador to the Republic of Mali from 2011-2014.  Her service in Mali was recognized with the Department’s Diplomacy for Human Rights Award in 2013, an honor that annually recognizes a U.S. Chief of Mission who has demonstrated extraordinary commitment to defending human rights and advancing democratic principles in his or her host country. She is also a recipient of the Meritorious Presidential Rank Award.