As prepared for delivery 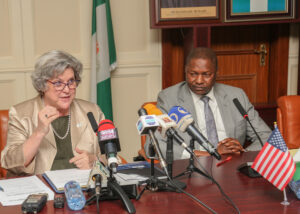 I am pleased to represent the United States government in my capacity as U.S. Ambassador to Nigeria and to finalize today’s agreement for the repatriation of approximately $23 million worth of additional assets stolen by former dictator Sani Abacha and his associates to the Nigerian people.

The U.S. Department of Justice and the Federal Bureau of Investigation seized these funds in response to General Abacha and his associates’ violation of U.S. law, when they laundered these assets through the United States and into accounts in the United Kingdom.  These actions were a flagrant breach of the Nigerian people’s trust, but today is the result of extensive and high-level cooperation between the United States, the United Kingdom, and the Federal Republic of Nigeria to make the Nigerian people whole.  This agreement is also the kind of collaboration that our governments must continue in order to right the wrongs committed under previous regimes.

As a result of today’s agreement, $23 million will be transferred to the Nigeran government, which, through the Nigeria Sovereign Investment Authority, will use the funds to continue the construction of three key infrastructure projects located in strategic economic zones throughout the country – the Second Niger Bridge, the Lagos-Ibadan Expressway, and the Abuja-Kano Road.  In other words, these recovered criminal proceeds – like the $311.7 million the United States previously seized and repatriated – will be transformed into visible and impactful representations of the possibilities for government assets that directly improve the lives of average Nigerians – not a corrupt elite.

The United States government is keenly aware of the devastating impact that corruption has on societies.  Corruption erodes trust and the ability of governments to deliver for their citizens.  It distorts economies and access to key services, hinders development, pushes citizens toward extremism, and makes countries and their officials susceptible to malicious foreign interference.  It is in recognition of the role that corruption plays in undermining democracy that the United States considers the fight against corruption a core national security interest.  To that end, President Biden released the first ever U.S. Strategy on Countering Corruption last December.

This strategy builds upon our longstanding work supporting our partners’ efforts to fight this scourge, including through the United Nations Convention Against Corruption, and modernizes, coordinates, and provides additional resources for our efforts to fight this cancer.  Secretary of State Blinken created the role of the Coordinator on Global Anti-Corruption within the State Department earlier this year to integrate and elevate our anti-corruption work across all aspects of our diplomatic engagement.  And, of course, through the ongoing work of the Department of Justice’s Kleptocracy Asset Recovery Initiative and the Federal Bureau of Investigation, U.S. law enforcement will continue to deny safe haven to corrupt actors and their assets.

Our agreement today also serves to reaffirm the important role Nigerian civil society plays in combatting corruption.  Among other things, it provides for both an independent auditor as well as an independent civil society monitor within Nigeria to track the expenditure of these recovered funds.  Consistent with the standard applied to the previously repatriated $311.7 million, reports regarding the expenditure of these additional monies will be public documents.  As a key partner deeply invested in Nigeria’s success, we will continue to do our part to facilitate the recovery and return of the proceeds of corruption to the Nigerian people.

While we celebrate this latest victory for the Nigerian people, I want to take this opportunity to reaffirm the United States’ commitment to our partners  – the Nigerian government, public, and public sector – to continue our work to defend democracy against corruption and continue our investment in the future of Nigeria.