Honored Friends of the Media, Academia and Civil Society.

The U.S. Mission in Nigeria is proud to partner with the Nigerian Guild of Editors on your important workshop this week to promote the importance of freedom of the press in a democracy.  The Nigerian Guild of Editors, the media writ large, labor unions, bar associations, along with everyone else gathered here today, you are all vital players in Nigeria’s democracy.  Working together, you take bold stands on transparency and accountability, inclusivity and equity, rule of law and fundamental freedoms.

Today, I would like to speak with you about the challenges that Nigeria and other democracies in the world face in four key areas: the disturbing rise of authoritarianism and self-censorship; the lack of public trust in government institutions; the public’s growing and parallel mistrust of media; and finally, what democratic governments can do together to halt or reverse these disturbing trends.

Authoritarianism has no place in  21st century politics, and yet we see examples across Africa, Asia, and even in parts of the West where dissenting voices are ignored or suppressed.

Just two weeks ago in Abuja, U.S. Secretary of State Antony Blinken noted that  “in Africa we see a microcosm of what democracies can achieve – as well as the challenges that they must overcome.”  In noting the rise in authoritarianism, the Secretary took inspiration from citizens raising their voices and calling for change – like those in Sudan to restore the civilian-led transition.  Many Africans are now living under at least partially authoritarian governments.  Militaries have taken over civilian governments four times this year; that’s the highest number in four decades.

Nigeria, on the other hand, has been consistent in calling for the respect of presidential term limits, and condemning military coups in West Africa and the rest of the continent.  In survey after survey conducted in countries across the continent, it is abundantly clear that the people of Africa support democracy and want governments that work for the public interest and which represent the will of the voters.  In addressing the rise in authoritarianism, Secretary Blinken noted:

One of the reasons that citizens are losing faith in some places in democracy, in the institutions, is because they feel that it’s  not delivering for them.  It’s not actually producing things that they need, that they want, and that will make a difference in their lives.

This leads me to the second large challenge that democracies today must address, and that is the lack of public trust in our democratic institutions, from our federal offices to national parliaments, even to opinion polling which is supposed to be non-partisan.  Patronage politics, corruption, inequality, and the failure of many democratic governments to deliver for their citizens fuel public and media doubts about the democratic model, causing them to lose hope and accept the status quo as normal.  This only further emboldens leaders to act even more autocratically.  We must put these problems out into the open and work together to solve them.  That has always been democracy’s greatest strength: the ability to improve upon and reinvent itself.  When the citizenry’s belief in democracy, good governance and elections are restored, invariably they will want to be a part of that system  and will defend it.

Nigerians believe in free and fair elections.  Just last month we congratulated the people of Anambra State for the peaceful conduct of their gubernatorial election, reflecting the will of the people.  Elections should be a cause for community celebration, where all the members of society, especially independent media, are welcomed to participate, express opinions, and to have their voice and vote count.

Our third overall challenge, as I suggested at the beginning of my talk, is an unfortunate, pervasive lack of trust in the media.  The media plays a daily, vital role in reflecting, steering and mobilizing public opinion.   When you all execute your journalistic roles thoughtfully, impartially and with accuracy, the reverberation of your words lingers.  When you uncover stories that others have tried to hide or deny, inevitably prosecutions follow, and accountability is attained through the voice of the people at the ballot box.  That is not to say that other elements of civil society are not critical, but rather to underscore that a team approach is needed to help improve public trust in the media.

As we approach the gubernatorial elections in Osun and Ekiti early next year, and even as we look toward the 2023 presidential elections, youth must be inspired to be part of the solution.  Teachers, civil society, entrepreneurs, and above all, the media must play a constructive role.  Media coverage of elections could more encourage turnout if all outlets focus on the issues that affect the daily lives of constituents.  Too often elections are personality based and lose focus on critical issues such as unemployment, inflation, and lack of health care.  The media can hold the candidates accountable for discussing issues.  The media can ensure that citizen voices are heard and this, in turn, may help reverse voter apathy.

In my country, the United States, we have experienced significant challenges, especially in the last 10-15 years, in satisfying skeptical U.S. voters that they can fully trust in what they watch on cable news or read on the Internet.  Competing TV news channels present opinion as fact to win over partisan viewers or capture a larger share of advertisers and the mass media market.  As a whole, U.S. journalists and media groups enjoy immense press freedoms, and we tend to think of them as the best in the business, but they too face their own credibility gaps vis-a-vis their local and national audiences, it simply comes with the territory!

Access to accurate, unbiased information is critical to democracy for at least two reasons.  First, it ensures that citizens make responsible, informed choices rather than acting out of ignorance or misinformation.  Second, information that is publicly accessible to all ensures that elected representatives uphold their oaths of office and carry out the wishes of those who elected them.

On all of these challenges, I believe there is a path forward that could reduce the spread of misinformation and improve access to accurate information, and that is through advocacy and training.   This is why the Embassy supported the Nigerian Guild of Editors in its U.S. grant proposal involving the training of editors, specifically how Nigerian editors can better advocate for and leverage their right to press freedom.  We also applaud efforts like the Open Contract Reporting project of the International Centre for Investigative Reporting which provide essential tools, strategy, and mentorship to journalists to better examine and question governmental waste.  When free and independent media publish principled editorials or take a stand to defend and protect their journalists in the field, the public takes note.  These are specific acts that media houses can take to build trust in all 36 states of this great federation.  And I do not believe I’m breaking a trade secret when I note with this trust comes increased subscriptions.

However, trust cannot be nurtured when media houses accept money from self-interested players or malign actors to publish favorable or unfavorable stories about perceived enemies.  Brown envelope journalism undermines the public’s trust in the media, erodes journalistic integrity, and defeats the media’s ability to play a transparent oversight role over government actions.  Simply put, this practice corrodes the institutional position of the media as what we refer to as the “Fourth Estate,” or one of our pillars of democracy.

Peter Clark of the Poynter Institute wrote this year about how the ideals of democracy and press freedom might be realized in an where misinformation is costing lives.  He recommended four things:

Our hope is that in this forum today and in the others to follow across the nation that you will lead and serve as catalysts for further discussion on these elements and their contribution to a democracy that is accountable to its people.

Traditional journalism values a focus on news reporting that is fair and impartial, guided by principles like truth, verification, and accuracy.  But those standards are not observed across the board in the “news” content that people consume.  In the age where populations increasingly seek to obtain information online, the United States remains committed to an open, interoperable, reliable, and secure Internet.  That is why, in the U.S. Department of State, we recently created a new Bureau of Cyberspace and Digital Policy.  In his announcement of that new bureau, Secretary Blinken noted that, “we have to be leading the world’s efforts and particularly the world’s democracies in responding to those threats — fighting back against disinformation, standing up for internet freedom, reducing the misuse of surveillance technology.”

Too often, technology is being used to silence dissent and prosecute citizens – and democracies must answer the call to fight back against disinformation, stand up for internet freedom, reduce the misuse of surveillance technology, and establish standards of responsible conduct in cyberspace.

Democracy works at its best where there is a multiplicity of voices from broad segments of society which represent every race, gender and ethnicity addressing a plethora of issues from access to opportunity, health, and prosperity.  This morning, we have reviewed how a rise in authoritarianism, lack of trust in government institutions, and in information providers has contributed to the so-called “back sliding” of democracy.

Right now, the world is at an inflection point between those who favor autocracy and those who know democracy can deliver for the people.  Next week, President Biden will be convening a virtual Summit for Democracy which some of you may have heard about, bringing together world leaders, civil society, and the private sector to set an affirmative vision for democracy.

“Democracy,” as President Biden said, “doesn’t happen by accident.  We have to defend it, fight for it, strengthen it, renew it.”  We hope you – the civil society representatives, academicians, youth leaders, editors, and journalists will join us for that global discussion on December 9.

Let’s start today with renewed vigor to promote positive democratic practices in Nigeria, with all the challenges to face.  You play an important role in pushing this country toward peace and prosperity.  I thank you for the opportunity to speak with you today and wish you robust and fruitful discussions. 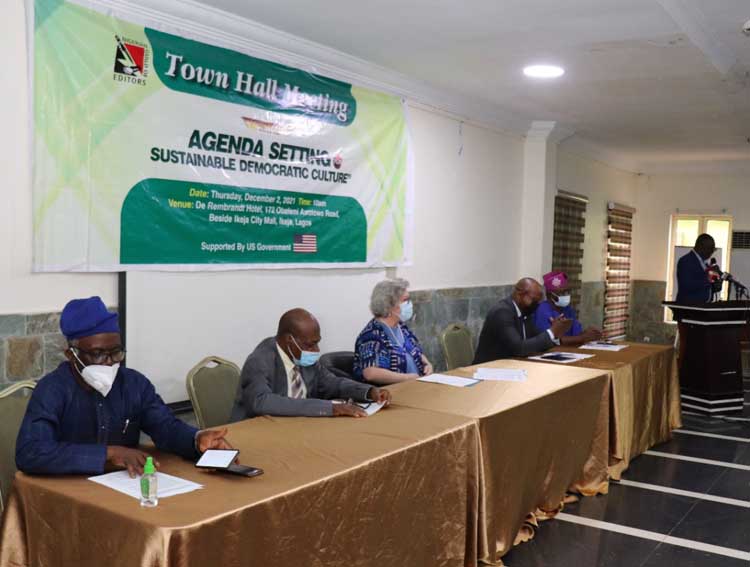 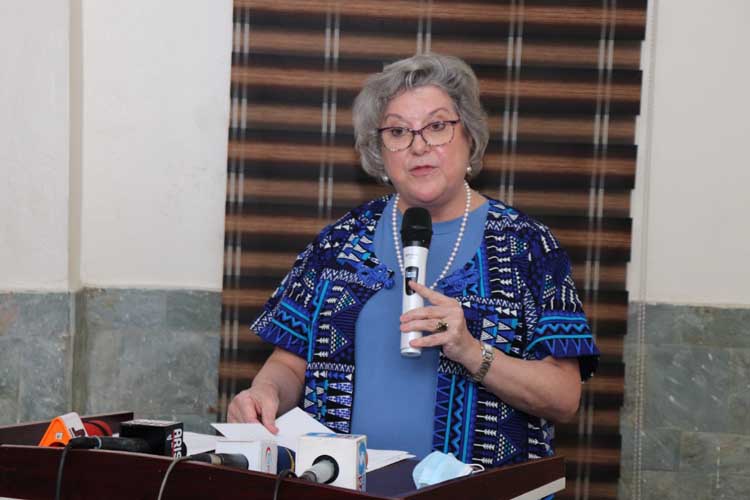 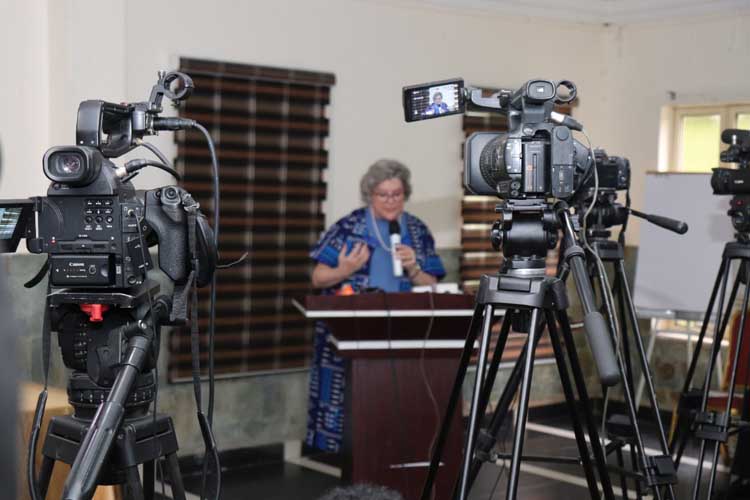 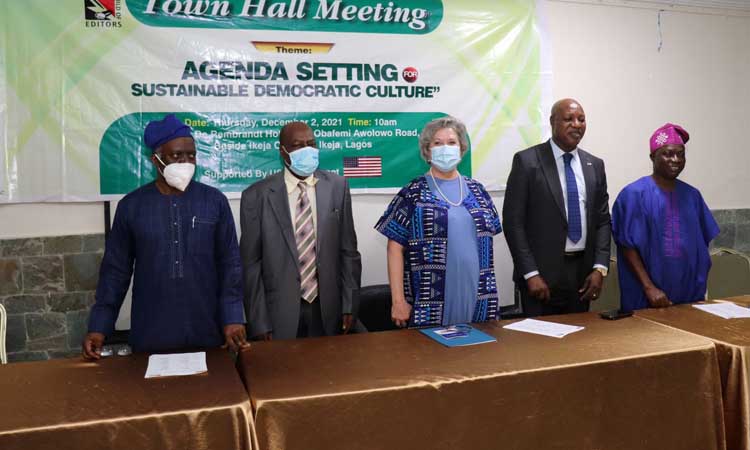