On February 15, Ambassador Mary Beth Leonard and Brigadier General Thomas Tickner visited Kainji Air Force Base to break ground on the final phase of the $38 million construction project for the A-29 Super Tucanos’ support facilities.  They were joined by the Deputy Director for the Air Force Security Assistance and Cooperation Directorate Ronald Taylor and senior Nigerian Air Force officials. 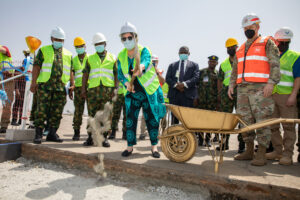 The construction site will be the location of several critical facilities including sunshades to house the A-29 Super Tucanos, munitions assembly and storage areas, and an annex for the A-29 flight simulator.  The U.S. Army Corps of Engineers (USACE) North Atlantic Division is overseeing the construction of this necessary infrastructure for the operation and maintenance of the A-29 Super Tucanos and their accompanying munitions.

While touring the site, Ambassador Leonard explained the importance of this groundbreaking, “We are not just here today to celebrate a milestone in airbase construction, but a milestone in a partnership between our two countries. This monumental undertaking of the Nigerian Air Force through the A-29 Super Tucano program reflects the work ethic, ingenuity, and dedication of the Nigerian people.”

Brigadier General Thomas Tickner, Commander of USACE’s North Atlantic Division, echoed Ambassador Leonard’s sentiment, “We are proud to partner with the U.S. Embassy, U.S. Air Force, and the Nigerian Air Force to deliver support facilities for their new fleet of A-29 Super Tucano aircraft.  These projects are a prime example of USACE’s unique ability to apply its engineering expertise in ways that build partner capacity, strengthen strategic relationships, and bolster Nigeria’s security capability.”

This construction project is a part of the historic $500 million U.S. foreign military sale to Nigeria, which also includes the delivery of the 12 A-29 Super Tucano aircrafts, munitions, and world-class training.  This is the largest U.S. foreign military sales case in Sub-Saharan Africa and demonstrates the strong partnership between the United States and Nigeria.  The United States is committed to assisting Nigeria in its efforts to create a more peaceful, prosperous nation.