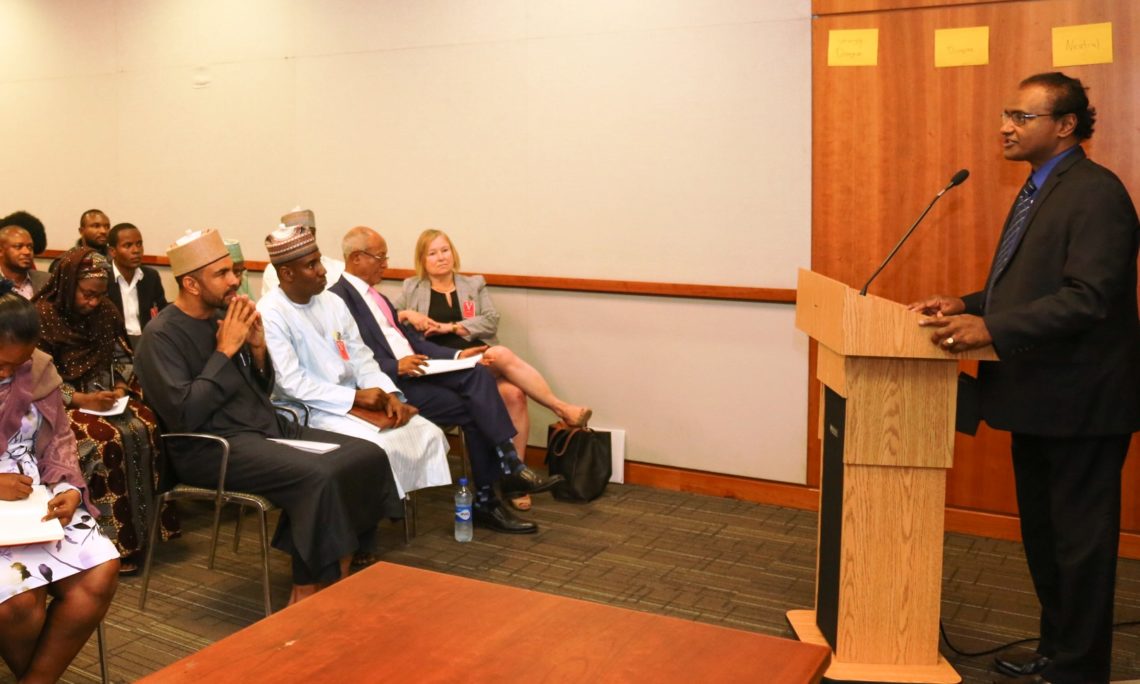 Honorable representatives of the government of Nigeria, members of the diplomatic community, ladies and gentlemen, it is my pleasure to welcome you to this special screening of Voice of America’s (VOA) award winning film, Boko Haram: Journey from Evil.  The Embassy is especially pleased to have with us today VOA Director Amanda Bennett, and VOA’s Africa Division Service Chief Negussie Mengesha.  They will be two of the panelists for the post-film discussion along with two of their Nigerian counterparts featured in today’s film.

Boko Haram is one of the world’s most deadly, and vicious, terrorist organizations.  The Council on Foreign Relations estimates the group is responsible for more than 28,000 deaths during the period from May 2011 through the present.  An estimated 2.2 million persons have been displaced in Nigeria and across the Lake Chad Basin region as a result of the conflict.  Many of you here today are eyewitnesses to the trail of death, destruction, and incalculable personal loss inflicted by Boko Haram.

Despite the innumerable tragedies connected to the insurgency, today’s film carries a message of hope and defiance based upon the efforts of the Nigerian citizens public and private featured in this film, who work tirelessly to heal the wounds resulting from this conflict.  Dr. Fatima Akilu, one of the film’s post-screening panel discussants, helped craft the government’s “Preventing and Countering Violent Extremism” strategy.  Since then she has led efforts to expose the ravages induced by the insurgency as well as to aid victims confront, and overcome, the trauma they have suffered.  Activist Bukky Shonibarre, who will also speak on the panel, is one of many women who has worked relentlessly to “Bring Back Our Girls” whether from Chibok, Dapchi, or less well known circumstances.  This film’s impact was recognized via the top prize in the 2018 New York Festivals’ international television and film award in the international documentary category this past April.

The U.S. Embassy to Nigeria is also working in concert with the government of Nigeria, fellow diplomatic missions, and many of the civil society organizations represented here today to address the multi-faceted dimensions of this conflict.  Our U.S. Agency for International Development office has the lead on coordinating the U.S. government’s humanitarian response, as well as helping to rebuild the basic civil institutions essential to re-establishing civil and social life in the hardest hit states and areas of northern Nigeria.  Our Office of Security Cooperation works to support the government of Nigeria’s combat forces in ensuring they are prepared to battle Boko Haram and Islamic State West Africa fighters.  Our Public Affairs Section oversees our CVE messaging efforts, and provides support to train a cadre of indigenous messengers best poised to reveal the falsity and vileness of Boko Haram propaganda.

As our Ambassador W. Stuart Symington often stresses, however, these efforts will only succeed with the active involvement of our Nigerian counterparts in government, civil society, and the private sphere.  Thus it is an especial pleasure to welcome you to this film screening, which celebrates the work and achievements of our Nigerian colleagues and friends.  Thank you for attending today’s screening.  I would now like to invite VOA Africa Division Service Chief Negussie Mengesha to the stand to introduce our chief guest, VOA Director Amanda Bennett who will introduce the film.