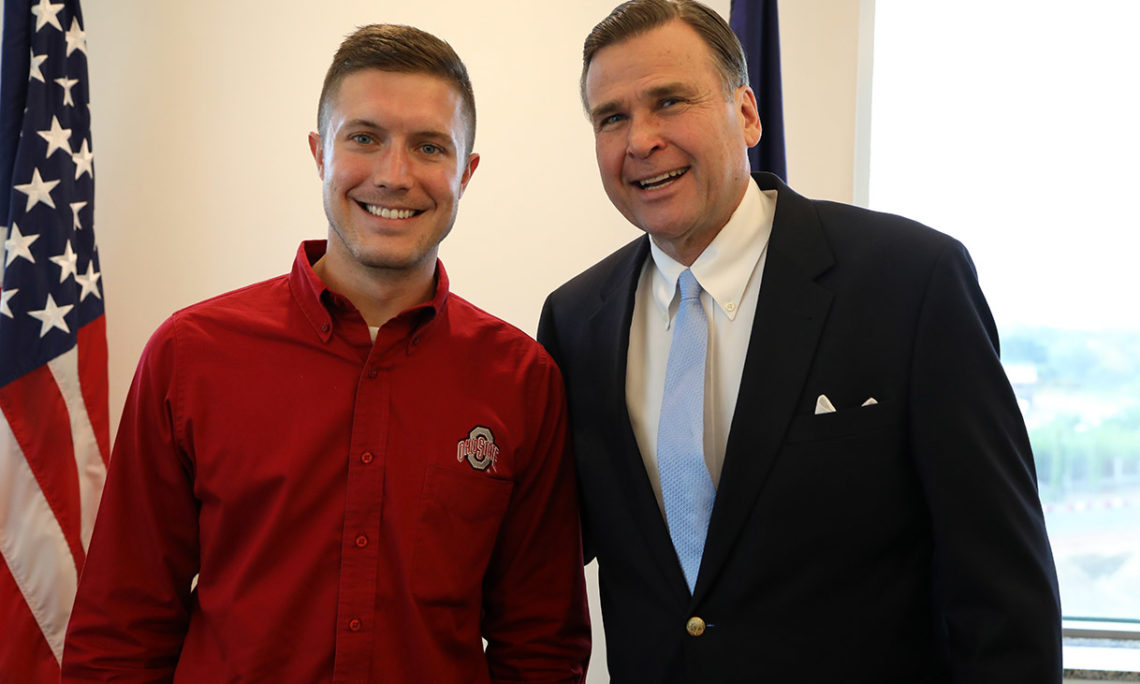 On May 16, 2017, Dustin Homan, Mandela Washington Fellowship Reciprocal Exchange Fellow, arrived Makurdi, Benue State.  His mission: to collaborate with 2016 Mandela Washington Fellow, Cosmas Anweh, to launch 4H clubs in Benue State.  4H, which stands for Head, Heart, Hands and Health, is a non-governmental global youth organization. Launched in 1902 in the U.S. state of Ohio, 4H connects youth and adults through skills building and leadership experiences in order to develop resilient communities and enable youth to make investment in themselves and a contribution to the world.

Cosmos, a public management fellow and graduate research assistant at the Institute of Food Security, Makurdi, learned about the 4H initiative during his fellowship at Ohio State University where he also met Dustin.  Dustin, who was at the time studying agricultural extension education at the master’s level, began his 4H journey as a child in elementary school.  Fascinated by the potential benefit of the 4H initiative in his home state of Benue, known as the food basket of the nation, Cosmos entered into discussion and planning with Dustin to invite him to Nigeria and work together to launch 4H clubs in Benue State.

“We want children to have more interest in agriculture. Having these skills to fall back on gives students leverage to better livelihood,” Cosmos said as he introduced Dustin to the

principal of Mount Saint Gabriel, one of the pilot schools that Dustin visited on his trip.  He further explained that through the 4H clubs students will be encouraged to cultivate a school garden.  While at Mount Saint Gabriel School, Dustin presented the 4H initiative, through a range of interactive activities and games, to both students and adult volunteers who will serve as club leaders.  U.S. Embassy Public Diplomacy Officer Amelia Broderick who joined the trip to Benue told the school community, “Our presence here today demonstrates the power of collaboration and networking.”

“You are one of the critical components of the success of 4H program, and my goal is to help prepare you to become engaged in 4H,” Dustin told a gathering of teachers representing more than 20 schools in Benue.  He shared his experience of the positive influence his club leader had in his personal and professional development, “My club leader saw the potential in me and helped me to become who I am today”.

Speaking at Radio Makurdi, Dustin described his childhood 4H project and the values it taught him.  “I raised rabbits as part of my 4H program.  I learned about responsibility, caring for animals, and keeping records, skills that I still use today.”  He emphasized that not only does being an active member prevent students from engaging in social vices; it gives young people an opportunity to contribute to the country’s development.

Merit Terfa, administrator at the Office of Head of Service, Makurdi said of the training “It’s an experience I’ve never had before. Bringing us all together to see how we can build 4H was inspiring. There are so many people that can benefit from the program and I can’t wait to start my club at Government Girls Secondary School Aidogodo”.

Dustin and Cosmos will count on the enthusiasm of volunteers like Ms. Terfa, and the support of the entire Benue community to spread the 4H values of loyalty, service, and healthy living across the state of Benue.